SYNOPSIS: The next Batman goes head-to-head with the Magistrate’s shock troops to protect the…guilty?! It’s a savage running battle across Gotham City, and it will have the next Dark Knight fighting overwhelming odds to prove that justice still lives in the heart of a broken city. 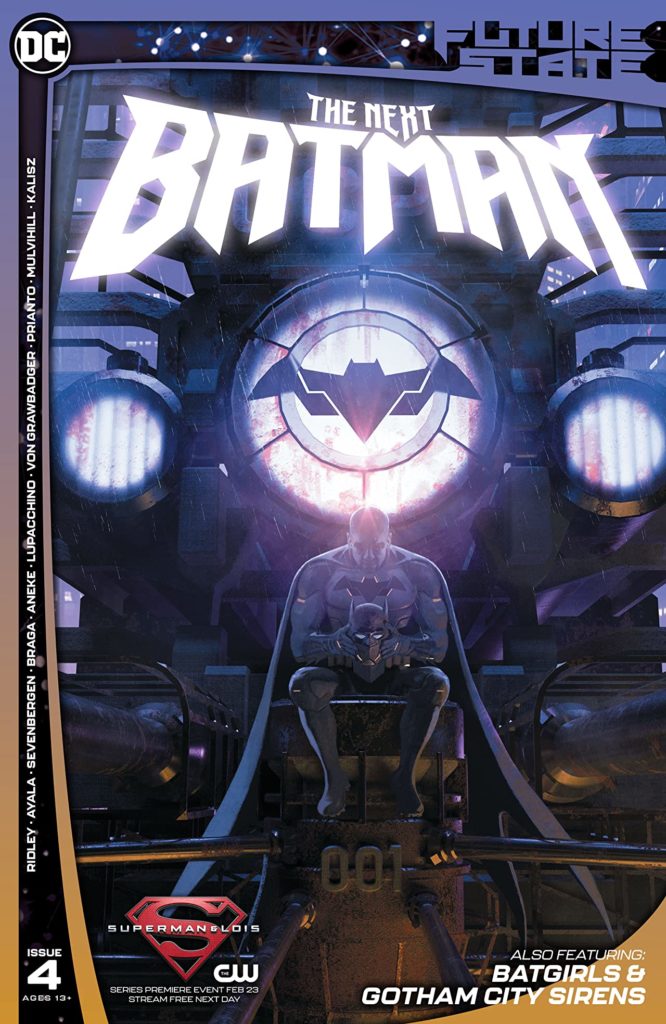 FUTURE STATE: THE NEXT BATMAN comes to a conclusion this week (sort of), as we wind down on the 2-month DC experiment. While this issue closes the chapter on this arc, we know that more Tim Fox Batman is coming soon.

Left on a bit of a cliffhanger a few weeks ago, Batman finds himself committed to justice, while also looking for understanding and empathy with the captured murderers. There’s more than meets the eye to their story, but he still needs to get them to the GCPD. Complications arise as the Magistrate is hot on their heels, ordered “shoot to kill” at people with masks…no questions asked.

While this initial issue kicked off better than I expected, THE NEXT BATMAN hasn’t done much to win me over. I’ve praised writer John Ridley for his efforts, but I just don’t think this interpretation really got off the ground. This finale (sort of) gives this Batman some moments to prove himself as a fighter for justice, but overall, these four issues seem like planting seeds for the recently-announced series. And sadly, nothing has happened here to make me want to continue. There are questions behind how and why Tim took on the cape and cowl, but no answers provided. We see plenty of The Dark Knight in Gotham, but don’t carry any emotion behind it. While I love to see our hero in action, it’s not hooking me in to carry on with this version’s story.

The art from Laura Braga continues to be “fine”. I’ve never meant to sound harsh toward her work, and think it looks perfectly fine in a comic book. There’s just nothing that stands out and really pops, you know? I have no complaints, but no extreme praises either.

And that summarizes my overall feelings with THE NEXT BATMAN. There aren’t many complaints, but not too many praises either. This is an “OK” set of issues with a different man behind the mask. If it’s worked for you, great! The story continues soon! If it didn’t work for you, the status quo returns in March.

And I hope the next BATMAN is ready to deliver. – Bill “Jett” Ramey