SYNOPSIS: It’s a beach party from hell! Robin’s mission to get to the heart of the League of Lazarus’s inner workings has left him once again locked in combat with his fellow fighters, but never did Damian Wayne think it would lead to a beach-blanket cookout. What’s more dangerous than a life-or-death struggle for the all-or-nothing prize of immortality? Well, for Damian, it’s acting like a normal teenager for five minutes. And don’t miss the surprise confrontation with Damian’s number 1 competition, a mysterious fighter trained by the League of Shadows! 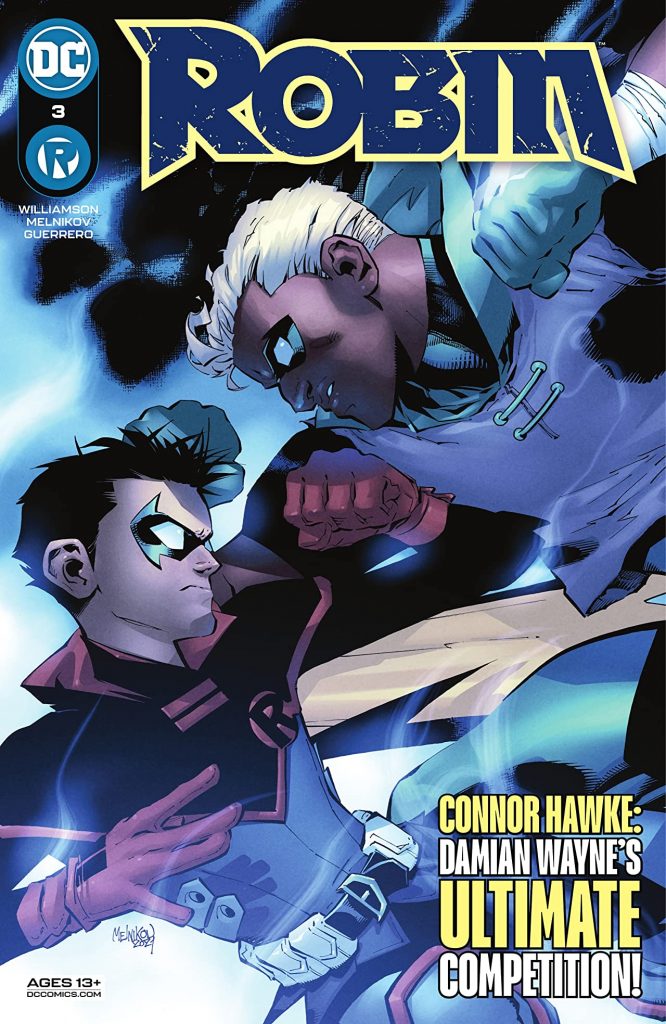 No, not like the one Damian got ripped out of his chest in the first issue.

This volume of Robin is showing that the Damian Wayne iteration of Batman’s sidekick has a lot of heart.

Grant Morrison gave us a taste. Peter Tomasi added more layers and depth in both Batman & Robin and Super Sons and now Joshua Williamson is continuing the fine tradition once again, not by giving us an action-packed issue (like I previously assumed), but one showing us that Damian is a boy looking for acceptance on his own terms, not because of who his parents, particularly his father, are.

“New Friends” opens with a beach party, with all the combatants trying to blow off some steam and relax before the competition begins in earnest. Unlike his father, Damian can’t just slide into a social setting and be the wild, billionaire playboy. He hasn’t crafted that party boy mask, nor have we seen him display the social skills. Instead, he tries to blend in the only way he knows how-showcasing his abilities with weapons by one-upping the knife scene from Aliens. Everyone is suitably impressed, but it quickly regresses into an evening where everyone shares tales of their encounters with Batman. Where once Damian briefly stood out, he’s now just a footnote and he retreats for some solitude.

However, he’s not the only one not joining in on the festivities. Hawke, who is billed as Damian’s greatest challenge on the island, also isn’t one to socialize amidst a loud party, and Damian is ready to break the rules to fight now if that’s what Connor wants.

It isn’t. I’ve got a soft spot in my heart for the Flash, Green Lantern, and Green Arrow of the ‘90s. I loved seeing them team up, be it in a crossover or in the pages of JLA, but it never occurred to me how perfectly Connor Hawke would be paired with Damian. It occurred to Williamson though and he effectively lays out how the pair are two sides of the same coin. The splash page of them sitting on the edge of a cliff with the specters of their fathers behind them as they compare notes is comic gold and a definite highlight for me.

Unfortunately, the camaraderie doesn’t last when the League of Shadows arrives, goading the duo into combat, a fight that requires a surprise rescuer for Damian!

Gleb Melnikov is a perfect fit for this book. He tricks up his layouts to keep things interesting and gives Damian not only a sense of fun (check out his wink to the camera) but shows off his vulnerable side as well through body language and shadow. The two-page spread where Damian and Connor’s fight is pure manga-style fun and energy and the man knows when to use a splash page.

For a story about a tournament to the death, there’s not a lot of action in this issue, but that’s okay because Williamson continues to build on Damian’s characterization. Will he always be a cocky punk? Maybe, but Williamson seems to have a goal of changing people’s minds when it comes to the little guy and I am all for it. – Javier E. Trujillo