SYNOPSIS: Batman’s bloody, no-holds-barred fight with Magistrate enforcer Peacekeeper-01 rages on in epic fashion! Simon Saint’s master plan comes to fruition as his Magistrate program makes its move on Gotham City, and things are about to heat up! (Not in a good way!) 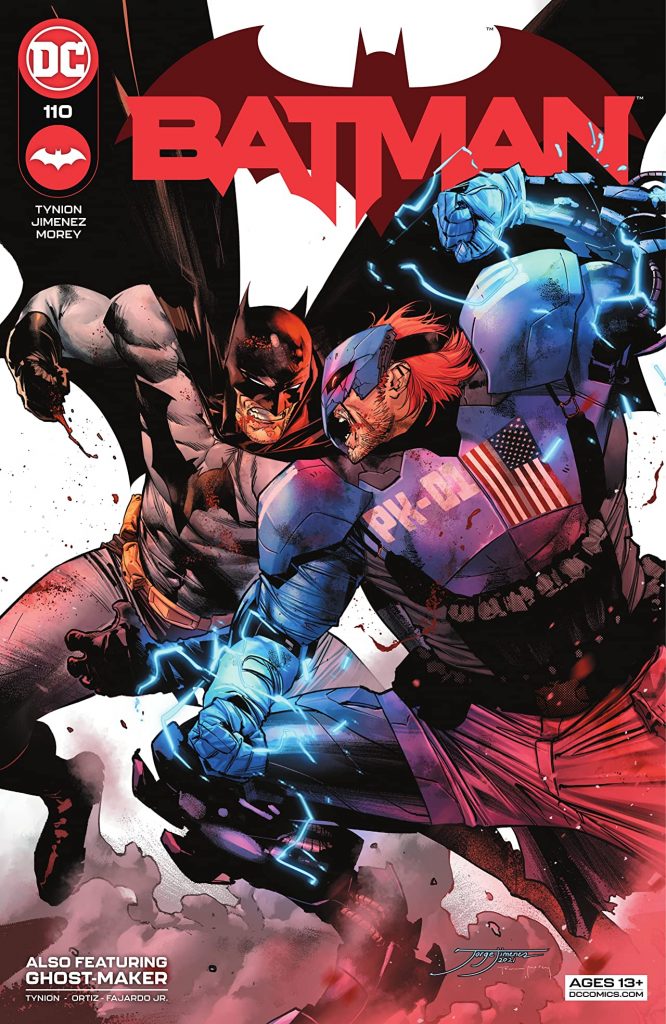 This month’s issue of BATMAN doesn’t shoot the title back up where it needs to be, but it is an improvement.

The Dark Knight’s problems continue to escalate, on a physical and mental level. Saint Industries continues to receive more power after a rise in violence in Gotham. While the civilians, media, and mayor believe in the face of the company, Simon Saint, revelations show he’s the puppeteer in the latest chapter of the city’s problems.

BATMAN #110 is much better than the previous two issues. Author James Tynion IV does a good job of showing us Batman’s hill to climb getting higher and harder, with a city that’s losing faith in him and more in this new Magistrate concept. Physically, he may be outmatched by the Peacekeeper-01, the “hero” of A-Day who may not be as heroic as we’re led to believe. I appreciated Tynion’s pacing and how he connected some of these different plots to make a decent comic.

While I found the story an improvement, it’s still falling short of expectations. We’re in the fifth issue straight opening with a Scarecrow tease that continues to be an annoyance instead of excitement. We now know it’s all teasing September’s “Fear State”, that Tynion is spearheading. This, as I probably state all-too-often, is a constant gripe of mine that the author is obsessed with teasing the future in his writing. And not in a way that’s exciting, but rather repetitive and obnoxious.

Another critique is our continued pursuit to lead everything into how “Future State” even began. I don’t care, at all, but I recognize that’s a personal bugaboo.

Artist Jorge Jimenez continues to do a great job with the look of the book. His knack for depicting action is striking and has created an original style that is starting to become a standout in today’s comics. You see an image of his, and know “That’s Jimenez”. I wasn’t a fan of his depictions of the Unsanity Collective’s neighborhood, but the rest of Gotham continues to look good.

Overall, the issue gets an “OK” from me. It’s better than it’s been, but not where it should be. I think at this point, I should just expect that Tynion on Batman just isn’t for me, and that’s okay. There are some bright spots and though I am annoyed by the Scarecrow teases these past issues, I hope “Fear State” puts him front and center for a major payoff. – Ryan Lower