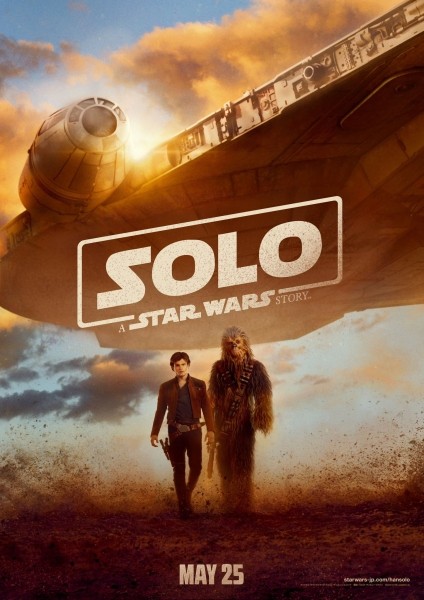 SYNOPSIS: Board the Millennium Falcon and journey to a galaxy far, far away in Solo: A Star Wars Story, an all-new adventure with the most beloved scoundrel in the galaxy. Through a series of daring escapades deep within a dark and dangerous criminal underworld, Han Solo meets his mighty future copilot Chewbacca and encounters the notorious gambler Lando Calrissian, in a journey that will set the course of one of the Star Wars saga’s most unlikely heroes.

SOLO: A STAR WARS STORY is LucasFilm’s 4th feature film since George Lucas sold his beloved franchise to Disney. It is the 4th Star Wars film in a row that proves to this lifelong fan that the franchise is in good hands.

With that said, mark my words: SOLO is not a groundbreaking Star Wars film. It’s not a film that is a game changer for this massive franchise, nor is it a Star Wars film that will likely join the “Billion Dollar Club” either.

No, this Star Wars film is designed for two things and two things only: Enrich the legendary character of Han Solo and to make us smile.

It excels at both.

SOLO is not a perfect movie; it suffers from a rather boring second act and includes far too many winks that may be a bit on the nose for some.

Regardless, it is a fun ride overall, and the cast does AMAZING work.

First, let’s address the 800-pound gorilla in the room: Alden Ehrenreich and his interpretation of Han.

Many people were unsettled about someone other than Harrison Ford playing Han Solo, but you can put those fears to rest right now. Alden IS Han Solo.

In fact, most people assumed that Donald Glover’s Lando Calrissian would steal the show (and don’t get me wrong, he is absolutely perfect in every way) and take the spotlight away from the lead, but I am of the opinion that the stars of this film are Han (Alden) and Chewie (now played by Joonas Suotamo since Peter Mayhew retired), full stop.

Yes, the entire cast is amazing, but again, this is the Han and Chewie show, as it should be.

If you were one of the fans that were turned off by the choices made in Rian Johnson’s THE LAST JEDI, then SOLO will be a nice palate cleanser for you. It is far less serious, far less risky, and it has a fraction of the fan expectations one would expect in the episodic chapters.

SOLO is all heart. And even though it’s a prequel, which means our surprise level can only be so high, there is one hell of a reveal that should take future films in exciting new directions (cough, cough…Obi-Wan solo film, please).

In short, Ron Howard’s SOLO is a blast (pun intended), and I cannot wait to see it again.

I teared up twice by the way. The force is definitely affecting me in my old age.

Either that, or George’s last gift to us was one of his finest: Mrs. Kennedy.

My money is on the latter. – Rick Shew