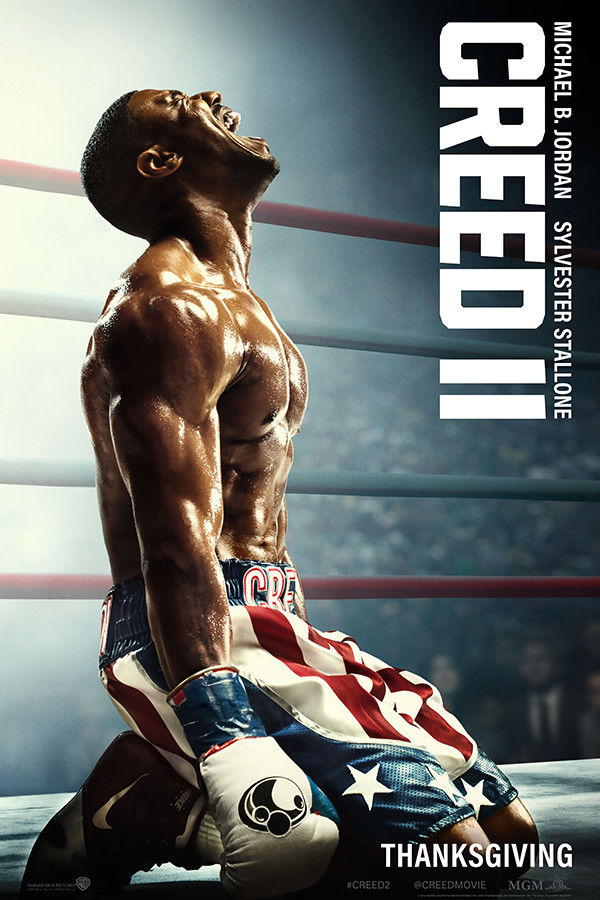 Between 1976-1985, the ROCKY franchise reigned supreme at the box office and in the hearts of millions of moviegoers around the world.

Then 1990 came along and the franchise hit its first dud with the maligned, Rocky V.

The franchise was, shall we say, down for the count.

Then Sylvester Stallone did the unthinkable; he made a 6th film titled ROCKY BALBOA in 2006.  The delightful gem that it was made for a perfect swan song for one of the most beloved film franchises in movie history.

Stallone put a nice bow on the franchise that made him famous.

Then fast forward to 2015, when writer and director Ryan Coogler pitched an idea to Stallone about Apollo’s son (that nobody knew existed) deciding to track down Rocky and convince him to train him to fight. After all, that was the least he could do since he should have stopped the fight that killed boy’s father in ROCKY IV.

CREED was such a rarity in franchise movie history. A spin-off of popular films, that very literally brought in a whole legion of new fans, while paying homage to everything that came before it.

(I want to point out that Stallone was robbed of his “Best Supporting Actor” Oscar nomination that year. Robbed, I tell you!)

When it was announced that Stallone wanted to do a sequel, I became very excited. When I then found out that Black Panther director Ryan Coogler wasn’t able to write or direct the sequel, I panicked.

As it turns out, the panic was all for nothing. Well, almost nothing.

CREED II is directed by newcomer Steven Caple Jr. (handpicked by Coogler) and he picks up Adonis Creed (Michael B Jordan) a year or so after the events of CREED.

I won’t break down the plot, because you can obviously do that for yourself when you see it, but I will say that this time around, the ex-Soviet boxer Ivan Drago (Dolph Lundgren) is back hoping that his son, Victor, can reclaim the glory that Ivan once had, before losing in Russia to Rocky Balboa 33 years ago.

Simply put, this film could have been a total train wreck.

I mean, Apollo Creed’s son is going to fight the son of the fighter that killed his dad in the mid 80’s Cold War Rocky flick?

Well hell yes, of course he is!

And that is what makes Creed II a truly delightful picture; it took a rather ridiculous premise and it made it (mostly) real and gritty.  It even retroactively makes ROCKY IV a far more interesting picture by virtue of making Ivan Drago a complex character, as well as the exploration of the ramifications of Apollo’s death.

Credit to the whole cast – especially its lead, Michael B. Jordan. But also to his co-star Tessa Thompson (Bianca). She gives yet another top-notch performance that truly is the heart of this film.

With all of this said, the film is not without its problems.

To circle back to my fears of Ryan Coogler’s absence, well, some of that was warranted.

He was, indeed, missed.

I felt that the emotional beats did not gel as they did in the first film.

I would have liked to have seen more of Victor Drago’s (played by real-life boxer Florian Munteanu) backstory. I love what they did with this character, it just felt like he could have been fleshed out a bit more.

And I am simply not a fan of Phylicia Rashad’s work in motion pictures.

Sitcoms, sure (terribly sad The Cosby Show is forever ruined, but that is an essay for another day), but she just does not have the cinematic chops to carry a role such as the late Apollo Creed’s widowed wife.

Most of the scenes she was in made me feel like I was watching a made for TV movie. My wife (who accompanied me to this press screening) blamed those scenes on the writing, not the actress.

I begged to differ.

Jordan and Thompson fared just fine when the script became wobbly and trite. So, a veteran actor such as herself should have been able to do the same.

A few scenes felt too emotionally on the nose, as well. The film wanted me to feel at times- but all I could sense was it trying too hard to do so.

So, even though I wanted to love this movie, I still very much liked it.

The Dragos have a nice arc, Stallone gives another beautiful performance and the ending had me very much in tears.

For the handful of contrived “Lifetime Movie of the Week” moments, the ending pays off so nicely.  For that, I will forgive the script for taking a few wrong turns.

In the end, this is a very worthy, albeit somewhat bumpy, sequel.

The fight scenes are great, most of the cast is great, the score is incredible, the training sequences are as good as ever, and it pulled off an 8th installment in a franchise that should have been dead 5 presidents ago.

In closing, Rocky’s classic speech to his son in ROCKY BALBOA perfectly encapsulates the franchise that refuses to die…

CREED II take a few hits, but it definitely picks itself up, keeps moving forward and ends beautifully. – Rick Shew