SYNOPSIS: Based on the bestselling autobiography from Mötley Crüe, the film is an unflinching tale of success and excess as four misfits rise from the streets of Hollywood to the heights of international fame. 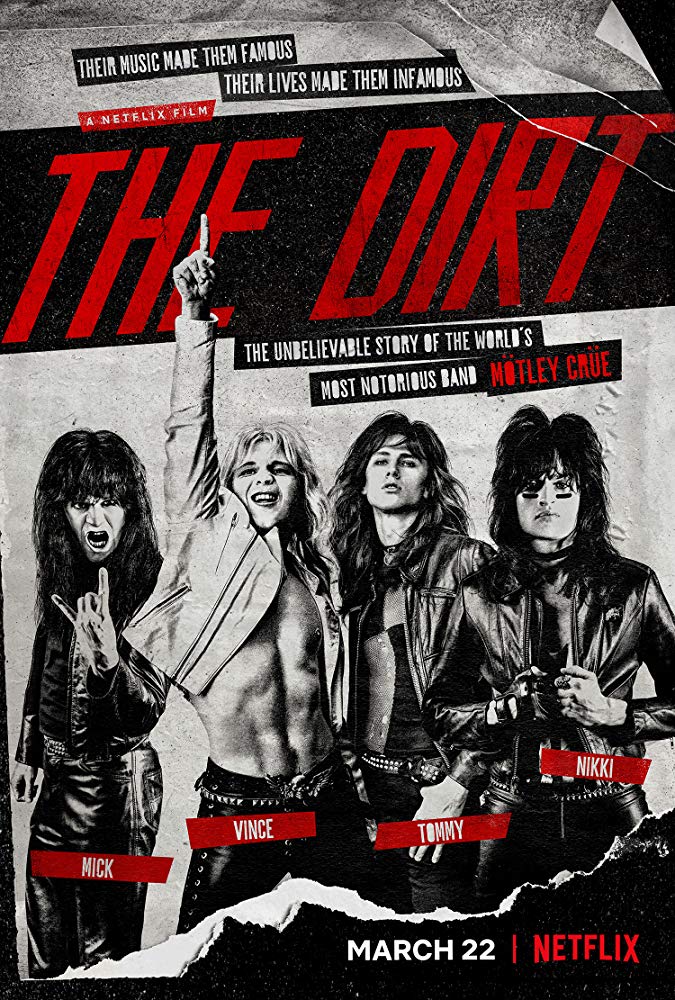 I need to have full disclosure here, my friends: Mötley Crüe’s first six albums are in many ways, the soundtrack of my early life.

Dressing up like the band in grade school while lip-syncing their songs with my cousin Brandon, middle school adolescence dreaming all day long about “Girls, Girls, Girls”; and to all my “Primal Scream(s)” as a confused and disgruntled teenager, the Crüe was right there with me during my most formative years.

Mötley Crüe played their final show on New Year’s Eve of 2015. But the band has continued working with a variety of different studios, writers, etc. in an effort to get their 2001 best selling memoir, THE DIRT,  transformed into a major motion picture.

The film eventually ended up in the hands of Netflix and JACKASS director Jeff Tremaine.

Once you see the movie, it is obvious why the band passed on Paramount Pictures and instead went with a streaming service.

If you are someone well versed in the band’s history, you could drive yourself crazy with some of the nitpicking inconsistencies. Some events simply did not happen the way they are portrayed in the film (the band’s manager Doc McGhee’s firing, for instance) and some major events in their lives/careers are simply left out.

One of those major omissions is regarding drummer Tommy Lee (who is portrayed perfectly by rapper turned actor Colson “Machine Gun Kelly” Baker). There is nothing in the movie about his high profile, estranged marriage to former BAYWATCH star, Pamela Anderson. Nor does it touch upon his departure from Mötley Crüe to pursue a solo career.

Speaking of Tommy leaving the band, didn’t his replacement, Randy Castillo (for the album New Tattoo) die of cancer shortly after recording the record? And wasn’t he replaced by Samantha Maloney from Hole for that tour?

Shit, I just added 2 more hours to this thing!

Which is why it makes sense that they streamlined the movie by basically ignoring the events between 1996 and 2004.

Tremaine does so by capturing the essence of each character brilliantly; all the while hitting on many of the key moments of their lives and careers — including Nikki’s drug use and Mick’s bone disease.

Vince’s tragedies are the most difficult scenes to sit through in the film, particularly the ones revolving around him losing his young daughter to cancer.

In addition, though the Tommy Lee/Pam Anderson drama was not represented, we saw plenty of examples of his dysfunctional relationship — including one with his first wife, actress Heather Locklear.

In today’s addiction-conscious, “me too” movement, post-excess culture society, THE DIRT is certainly not a film for everyone.

However, if the film ignored the realities of the 1980s to the mid 1990’s, the band’s story would have been done a disservice.

That is this movie.

And I am grateful. – Rick Shew 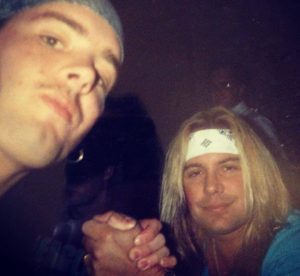 SIDE NOTE: I have met all these guys many times over the years.

If you and I ever have a drink together, remind me to tell you the story of Vince Neil giving me a $20 bill at the SkyBar in OKC back in 2005.

BATMAN: CURSE OF THE WHITE KNIGHT Coming in 2019!