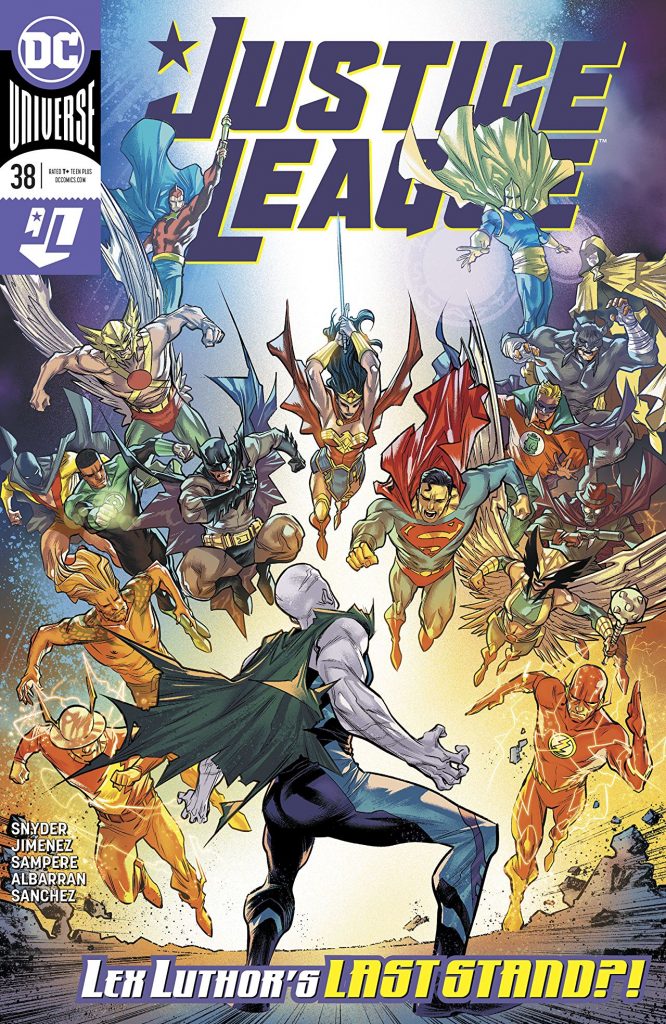 Christmas came early for the readers of Justice League as the quality of the title continues to amaze. Issue #38 is the biggest and shiniest package under the tree, and when it’s opened it is the real deal, not just a bulk package of socks from your aunt Karen.

Now, it’s not that this run hasn’t had its highs and lows; the previous issue in the series was not among its best, but when said issue is still a strong “B/B+” it speaks very highly of what Scott Snyder and team have been delivering for months upon months upon months at this point. However, where JL #37 was a slight let down, JL #38 roars to life with a big bombastic story that doesn’t forget to engage the heart and mind as well as the eyeballs.

The issue opens focused on the core members of the Justice League working to execute their last-ditch effort to fight against Lex and the forces of Perpetua.

Their goal is two-fold: connect with the positive elements and sources of their power while the psychic heroes on the team connect with everyone on earth to show them the heroes fighting again all odds in order to get them to side with justice.

The goal of Snyder as the writer seemed to be one-fold: explain the heroes’ plan in a way that makes sense to the reader, unlike the way it was presented in the last issue! Good news! He does! And it makes perfect sense! If you want to sway a whole bunch of people to side with you then maybe show them the lengths you’re willing to go for them! (Now if only Snyder would show how that weird prayer circle thing from the last issue allowed the heroes to tap into their positive element energy before they headed into battle, but let’s just move along.)

Our heroes engage in battle, with the core members of the League taking on Lex one by one while the others fight Lex’s army. Green Lantern, Flash, Wonder Woman, and Batman all give it a go and the go they give is somewhat less than effective. Will Superman find a way to prevail when his friends and teammates have fought to a standstill? (The answer is yes, thanks to  some heart, intellect, and teamwork.)

The efforts are effective enough that Perpetua joins the fight herself. She breaks the connection the psychics had created and begins to stop the sway of the multiverse towards Justice. Now, I’m not quite sure how our heroes are going to take on Perpetua, and this may be one of my bigger complaints about the storyline in general and this issue in particular. We’ve heard for months and months about how powerful the goddess of creation Perpetua is. She created the multiverse! She weaponized life itself! She can destroy entire existences at will! Some of this we’ve seen, but more often we’re just told that these things are true. Luckily, the fight never seems to go anywhere, at least in this issue, so maybe the heroes are just operating on borrowed time?

By now you’re wondering “Hey Garret, this all sounds like a lot of super-fun spectacle, but where is the heart in this issue?” I’m glad you asked, dear reader. The answer is that it’s found in Shayne, the alternate reality son of Hawk Girl and Martian Manhunter (and on the surface total gimmick character.) Hawk Girl and Shayne move in on Luthor distracting him by telling him he’s forgiven for his atrocities against humanity and using the name he went by as a child, Albie. Shayne enters Luthor’s mind to talk to Martian Manhunter in one of Luthor’s memories. This is the part where I tell you I’m not going to spoil the story details, and I won’t, but suffice to say that Shayne transcends his “Elseworlds” gimmick back story and lends some real emotional weight to the story in a way that will make you say “you got me, Snyder, you got me good and I didn’t really see it coming!”

Overall the story in JL #38 is great. It’s fast-moving through battle and highlights the core heroes and their efforts against Lex. The plan from JL #37 is made more clear how to move the balance to justice by showing people the heroics of the league fighting for them.

Given what we’ve been told (and rarely shown) of Perpetua’s power, it’s hard to imagine what the league is going to be able to do to stop her, but I can’t wait to see what’s in store in the epic conclusion of the Justice/Doom War! – Garett Grev