BATMAN BEYOND: RETURN OF THE JOKER 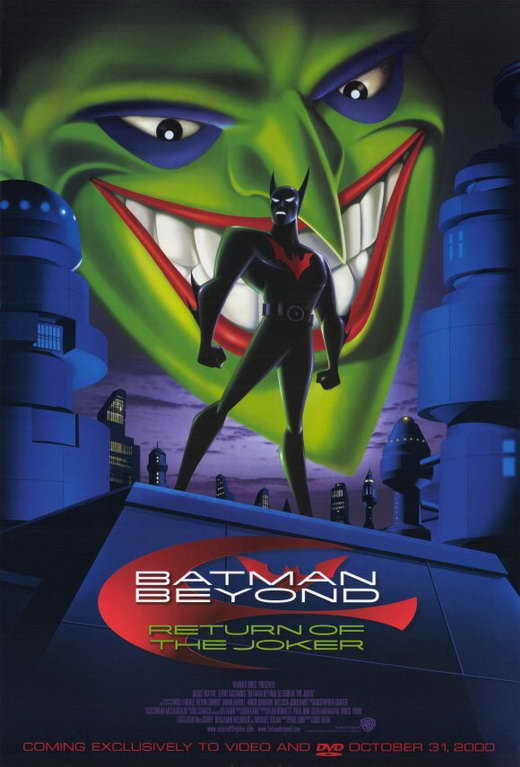 BATMAN BEYOND (BATMAN OF THE FUTURE in many locations) gets a bad rap by many fans in my opinion. I like it — I’ve always liked it. I believe it to be a quality and respectful interpretation of the Batman mythos. It is a fantastic series of stories set in The Batman’s future — animated future that is.

The animated TV series, BATMAN BEYOND is a futuristic Batman television show, set in the “DC Animated Universe.” It ran from 1999 to 2002 with 52 episodes and one direct-to-video film. It is that film that I will be reviewing today — BATMAN BEYOND: RETURN OF THE JOKER.

When I first purchased this film on VHS back in 2000, it was the edited version that was initially released by Warner Home Video. If you remember, there was a huge outcry and backlash over this move, as the original, uncut version was said to be much better — and much darker as well. Eventually, WHV saw the error of their ways and officially released the original uncut version of the film as the filmmakers intended it to be.

I actually was able to see the uncut version way before it was released, thanks to a friend of BOF. Now, I liked the edited version that I had purchased, as I didn’t know any better at the time. But the uncut version — Wow! It simply is an excellent movie. One that I believe to be the second best animated Bat-flick (next to MASK OF THE PHANTASM, as well as one of the better Bat-films period.

And don’t worry folks, as per BOF‘s policy, this review is spoiler-free.

Things start out pretty good for both Bruce Wayne (Kevin Conroy) and Terry McGinnis (Will Friedle). Terry has settled into his role as Gotham’s guardian, Batman, while Bruce has reacquired control of Wayne Enterprises. Happy times are not for long as The Joker (Mark Hamill) — The Batman’s arch-nemesis from years back — has seemly returned to Gotham. The original Dark Knight, Bruce Wayne, knows that this Joker can not possibly be the real deal. Why? Because he saw The Joker die with his own two eyes years ago, he informs Terry.

The thing is, This Joker knows things about Bruce that only The Crown Prince of Crime would know. And he knows that Bruce was, or is, The Batman. Terry wants to investigate, while Bruce clams up and wants to handle this situation on his own. Obviously, the return of “The Joker” has opened up some old wounds for Bruce. And we eventually find out, it was his greatest failure.

Terry does some detective work, questioning (as Batman) former Robin Tim Drake (Dean Stockwell), now a communications engineer who denies involvement. He attempts to interrogate Commissioner Barbara Gordon (Angie Harmon), who warns Terry that The Joker is no funny guy in clown makeup — and to drop it.

When The Joker attacks Bruce in The Batcave and leaves him for dead, Barbara finally informs Terry about what happened between Bruce, Tim, Barbara (as Batgirl) and The Joker years ago.

So is this Joker The Joker? If it is, why is he so much younger than Bruce? Is it Tim? Someone else? A clone? That readers, is the mystery.

It is the revelation of this mystery that makes for one of the best and most shocking scenes in the Bat-franchise — a scene that is at once chilling, horrific, and sad. But it’s not the only reason to see ROTJ — the whole story is brimming with suspense, action, and a small touch of humor. It is everything and more that you would expect in a quality Bat-film.

One bonus of ROTJ is that we sort of find out what happened to Bruce and “the gang” from THE ANIMATED SERIES. We learn what happened to The Joker and Harley. We discover why The Batman — and Bruce — for that matter — went completely solo from that point on.

As with all of the animated Batman films, the animation is very good and the voice acting is top notch. Conroy does a great job as Bruce Wayne/The Batman as always. And of course, Mark Hamill is again tremendous as The Joker. Kudos go out to Stockwell and Harmon was well.

The great thing about ROTJ is that this is NOT kiddie fare. It is honestly disturbing — The Joker is about as frightening and sadistic he has ever been in a live-action or animated movie. It certainly is deserving of the PG-13 rating the uncut version ultimately received. – Bill “Jett” Ramey (2002)