BATMAN: THE ANIMATED SERIES was the first “serious” animated Batman television series.   BTAS is widely regarded by fans as the most iconic depiction of the Batman character and mythos; as well as the best animated series based on a comic book.

While many people were responsible for this series, the two names most commonly associated with it are Bruce Timm and Paul Dini.

Debuting the same year as Tim Burton’s second Batman movie, B: TAS capitalized on the public’s fervor for a darker, more serious Batman — one far removed from the comedic and campy Batman portrayed by Adam West. And on the animated side, the non-threatening Batman of SUPERFRIENDS. This was a Batman that harkened back to his dark, gothic beginnings.

The original episodes were produced by Bruce Timm and Eric Radomski and first aired from 1992 to 1995. They broadcast weekday afternoons on the FOX television network. After a strong and successful 85-episode run, new episodes were created for The WB network’s “The Kid’s WB” and was known as THE NEW BATMAN ADVENTURES. This series ran from 1997-1999 and produced 24 episodes. 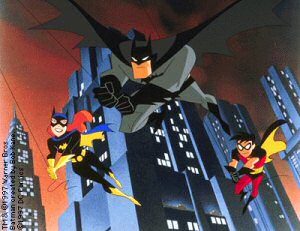 While there is a bit of a different “look” between BTAS and THE NEW BATMAN ADVENTURES, most of the people behind both series say that the latter is indeed a continuation of the former; just a few years down the line.

The series was the first of the modern “DC Animated Continuity,” which would go on to include the animated SUPERMAN series, BATMAN BEYOND, and JUSTICE LEAGUE.

The original series was influenced by the first two live-action BATMAN films directed by Tim Burton (especially the first one – 1989’s BATMAN). The Burton Bat-films influence is most evident in the series “otherworldy timelessness.” It was also influenced by the 1940s SUPERMAN animated shorts produced by Fleischer Studios.

The Batman of both animated series is based on DC COMICS’ “Batman” character, although the continuities are different and The animated Batman possesses a different personal history to his comic book equivalent.

As in the BATMAN comic books, “The Batman” is the alternate identity of billionaire Bruce Wayne, who adopted the persona in response to the brutal murder of his parents when he was a child. In this series (as well as other series in the “DC Animated Universe“), Batman/Bruce Wayne is voiced by Kevin Conroy.

It should be noted that the look of many of the villains such as The Joker and The Penguin, changed a bit as depicted in the original series as compared to THE NEW ADVENTURES.

There have been several animated films based on BTAS. 1992’s BATMAN: MASK OF THE PHANTASM got a limited theatrical release followed by home video. 1997‘s SUBZERO (featuring Mr. Freeze), 2000‘s BATMAN BEYOND: RETURN OF THE JOKER (based on that TV series), and 2003‘s BATMAN: MYSTERY OF THE BATWOMAN all were direct to video movies released by Warner Home Video. All are held in high-esteem among fans.