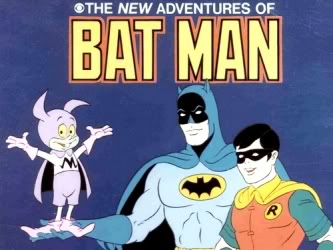 THE NEW ADVENTURES OF BATMAN was an animated series produced by Filmation and its 16 episodes aired on the CBS Television Network from February to May of 1977.

Continuity-wise, it is supposed to be a continuation of the live-action BATMAN TV series that aired on the ABC network in the late 1960s. Adam West and Burt Ward, who played Batman and Robin respectively on the live-action series, also voiced the characters in this animated series.

In THE NEW BATMAN ADVENTURES, Batman and Robin fight crime in their hometown of Gotham City, squaring off against classic Batman villains as well as some new ones created solely for this series. Teaming up with Batman and Robin is Batgirl (AKA Barbara Gordon) and “Batman’s biggest fan,” Bat-Mite. Even though Batman comics had a dark and serious tone since c. 1970, the show was silly and campy like the live-action TV show and the Batman comics of the 1940s, 50s, and 60s.

THE NEW ADVENTURES OF BATMAN aired on CBS the same time as SUPER FRIENDS on ABC. The two shows provided a viewers a rare and ironic case of “Batman vs. Batman” as SUPER FRIENDS (that had Batman and Robin’s voiced provided by were voiced by Olan Soule and Casey Kasem) was produced by Filmation’s rival, Hanna-Barbara Productions. 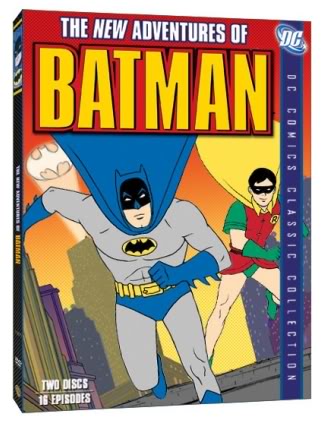