The Batmen – Batman In Live Action

Lewis Wilson was the first and youngest (age 23) actor to play Batman in live-action.  He appeared as Bruce Wayne and Batman in the 1943 movie serial, THE BATMAN.

Wilson didn’t do all that much as an actor after THE BATMAN. He was a regular on the CRAIG KENNEDY, CRIMINOLOGIST TV series in the early 50s, and was in the crazy cult-classic, WILD WOMEN (BOWANGA, BOWANGA).

Robert Lowery (age 36 when playing Batman) was a veteran actor when he took over the role of Batman in the 1949 BATMAN AND ROBIN serial for Columbia Pictures.

While only playing Batman once, he went on to a long career in film and TV – he even made an appearance on THE ADVENTURES OF SUPERMAN in 1956

Adam West (age 35 when first playing Batman) portrayed the character more times than another other actor to date.

West portrayed Batman in 120 episodes of the 1960s BATMAN TV series, the 1966 BATMAN movie, as well as voicing the character many times – including the animated films, BATMAN: RETURN OF THE CAPED CRUSADERS (2016) and BATMAN VS. TWO-FACE (2017). He won the role of Batman/Bruce Wayne over Lyle Waggoner (THE CAROL BURNETT SHOW, WONDER WOMAN).

An unconventional choice for the role, the casting of Michael Keaton (age 37 when first playing Batman) as Batman in 1988 led to fans sending over 50,000 letters of protest to Warner Bros. Known mostly as a comedian in such films as NIGHTSHIFT and MR. MOM, fans feared that Keaton’s casting meant that this Batman movie would simply be a remake of the campy 60s TV series. Director Tim Burton and the film’s producers – Jon Peters and Peter Guber – wanted Keaton due to his “everyman” look” and also because he had an “edgy, tormented quality.”

BATMAN ended up being a huge hit and Keaton proved naysayers wrong with his dark, and somewhat quirky portrayal of Batman and Bruce Wayne.

Keaton became the first actor to reprise the role of Batman for a second time in a live-action film in 1992’s BATMAN RETURNS.

30 years after BATMAN RETURNS, Keaton reprises the role of Batman/Bruce Wayne in THE FLASH which is set for a November 2022 release. 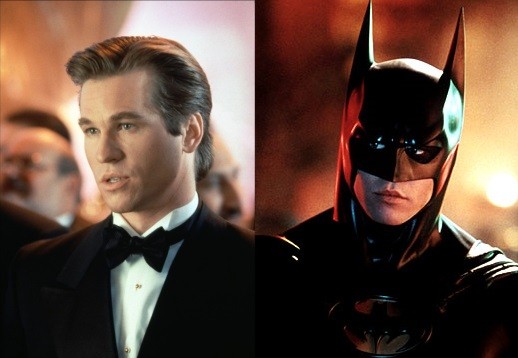 When Tim Burton was, ahem, “invited to leave” the Batman film franchise after BATMAN RETURNS, Warner Bros. replaced him with director Joel Schumacher.

When Michael Keaton didn’t jibe with Schumacher’s take on the new Batman film, Keaton decided not to return for a third go as Batman (even though costumes for him were already being built and Rene Russo had been cast as the Batman’s love interest because she was around Keaton’s age).

BATMAN FOREVER ended up being a big as it was the 2nd highest-grossing film of 1995 (actually making more than BATMAN RETURNS. Regardless, BATMAN FOREVER would be Kilmer’s only turn as Batman. Due to, um, “scheduling issues” (i.e. Kilmer was a pain in the ass on set and Schumacher was more than happy for Kilmer not to come back), director Joel Schumacher was “forced” to cast yet another actor to take over the role of Batman in the next film.

George Clooney (age 36 as Batman) was a huge TV star for his role as Dr. Doug Ross on ER and had a breakout role in film in 1996 in FROM DUSK TILL DAWN. On the cusp of movie superstardom, it seemed to be a coup for Warner Bros. and director Joel Schumacher hired Clooney to replace the departed Val Kilmer as Batman in 1997’s BATMAN & ROBIN. Then, the movie came out.

Not only was BATMAN & ROBIN a critical disaster and the worst-performing of the Warner Bros. Batman films at the box office, it nearly killed the whole Batman movie franchise. It would be eight years before Batman would hit the silver screen again.

Fortunately for Clooney, he came out of unscathed and did indeed go on to movie super-stardom.

Arguably the best Batman (and Bruce Wayne) on film to date, what else is there to say other than that Christian Bale (age 31 when first playing Batman) was the heart and soul of director Christopher Nolan’s three Batman films – AKA THE DARK KNIGHT TRILOGY. Not only was the TRILOGY a huge box office success, it’s the most critically acclaimed series of comic book/superhero films ever.

Playing Batman/Bruce Wayne in three films — BATMAN BEGINS (2005), THE DARK KNIGHT (2008), and THE DARK KNIGHT RISES (2012) — Bale currently holds the title for having played the character(s) the most in live-action solo Batman movies. 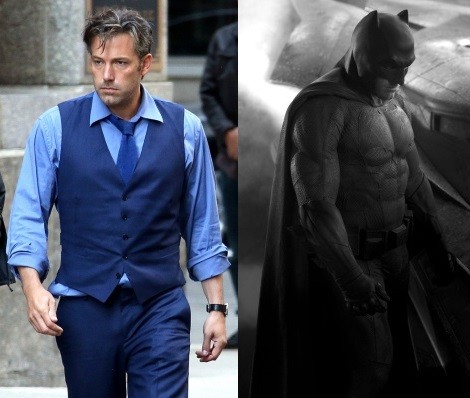 Probably the most physically-suited actor to date to play Batman/Bruce Wayne, Ben Affleck (age 43 when he first portrayed Batman) is the oldest to portray the character. Affleck starred as The Caped Crusader in BATMAN v SUPERMAN, JUSTICE LEAGUE, a small cameo in SUICIDE SQUAD, and ZSJL.

Affleck is set for a small cameo as Batman/Bruce Wayne in the 2022 film, THE FLASH which will be his final turn as Batman. 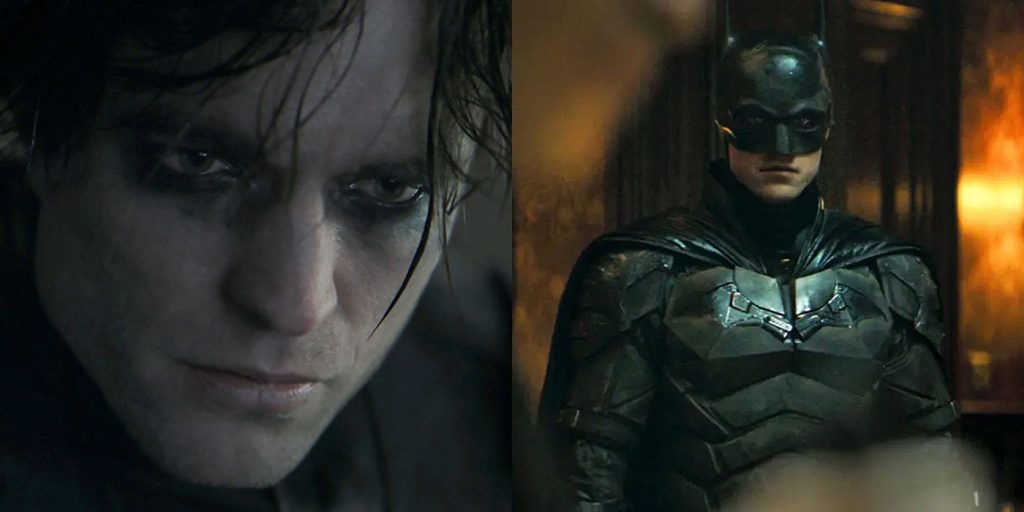 Robert Pattinson will play Batman/Bruce Wayne in director Matt Reeves’ THE BATMAN which is set for release on March 4, 2022.  Reeves is expected to helm a new trilogy of Batman films over the next decade-plus with Pattinson in the lead role.