BATMAN: THE BRAVE AND THE BOLD was an animated Batman TV series that premiered in 2008 and ended in 2011.  It was loosely based on DC Comics’ THE BRAVE AND THE BOLD comic book.  In each episode, the focus was on Batman teaming-up with various DC Comics superheroes — both well-known and obscure.  It is also a “love letter” to not only the Batman mythos, but the history of DC Comics as well.

BATMAN: THE BRAVE AND THE BOLD was developed for TV by James Tucker and Michael Jelenic.  It aired on the CARTOON NETWORK.

The series made a comeback in 2018 as Warner Bros. Home Entertainment released the SCOOBY DOO AND BATMAN: THE BRAVE AND THE BOLD animated film.  As of this writing, more animated movies based on the series are possible. 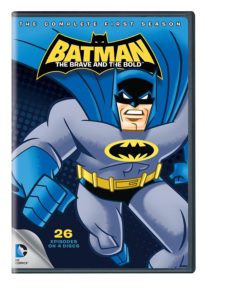 “The Rise of the Blue Beetle!
“Terror on Dinosaur Island!
“Evil Under the Sea!”
Invasion of the Secret Santas!
Day Of The Dark Knight!
Enter the Outsiders!
Dawn of the Dead Man!
Fall of the Blue Beetle!”
Journey to the Center of the Bat!
The Eyes of Despero!
Return of the Fearsome Fangs!
Deep Cover for Batman!
Game Over for Owlman!
Mystery in Space!
Trials of the Demon!
Night of The Huntress!
Menace of the Conqueror Caveman!
The Color of Revenge!
Legends of The Dark Mite!
Hail the Tornado Tyrant!
Duel of the Double Crossers!
The Last Bat on Earth!
When OMAC Attacks!
Mayhem of the Musical Meister!
Inside The Outsiders!
The Fate of Equinox! 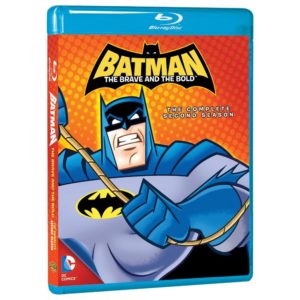 Death Race To Oblivion!
Long Arm of the Law!
Revenge of the Reach!
Aquaman’s Outrageous Adventure!
The Golden Age of Justice!
Sidekicks Assemble!
Clash of the Metal Men!
A Bat Divided!
The Super Batman of Planet X!
The Power of Shazam!
Chill of the Night!
Gorillas In Our Midst!
The Siege of Starro! (1)
The Siege of Starro! (2)
Requiem for a Scarlet Speedster!
The Last Patrol!
Menace of the Madniks!
Emperor Joker!
The Criss Cross Conspiracy!
Plague of the Prototypes!
Cry Freedom Fighters!
Knights of Tomorrow!
Darkseid Decending!
The Masks of Matches Malone!
Batman’s Strangest Cases!
The Malicious Mr. Mind! 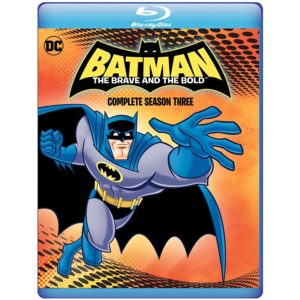 The Vile and the Villianous!
Shadow of the Bat!
Scorn of the Star Sapphire!t
Battle of the Superheroes!
Time Out for Vengeance!
Sword of the Atom!
Triumvirate of Terror!
Bold Beginnings!
Powerless!
Four Star Spectacular!
Crisis: 22,300 Miles Above Earth!
Mitefall!