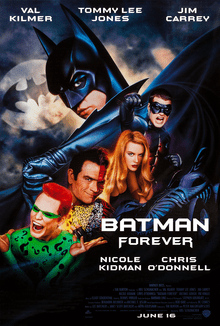 BATMAN FOREVER (1995) is the third installment of the four “Burton/Schumacher” summer blockbuster Batman films of the late 1980s and 1990s from Warner Bros. Pictures. It was preceded by BATMAN RETURNS in 1992 and followed by BATMAN & ROBIN in 1997.

It starred Val Kilmer as Batman/Bruce Wayne, Jim Carrey as Edward Nigma/The Riddler, Nicole Kidman as Dr. Chase Meridian, Michael Gough as Alfred, Pat Hingle as Commissioner Gordon, Chris O’Donnell as Dick Grayson/Robin, and Tommy Lee Jones as Harvey Dent/Two Face. It was directed by Joel Schumacher; screenplay by Lee Batchler, Janet Scott Batchler, and Akiva Goldsman; story by Lee Batchler and Janet Scott Batchler; and, it was produced by Peter MacGregor-Scott and Tim Burton.  It was released on June 9, 1995.

The plot consists of the Bruce Wayne-obsessed Riddler teaming-up with Two Face to “kill the Bat.”  Bruce Wayne is tortured by the memories and repressed pain of his parent’s murder when he was a child.  To deal deal with it, he begins seeing psychologist Chase Meridian — who is also obsessed with Batman — and a romance between the two begins.

Bruce Wayne also takes in Richard “Dick” Grayson — a 17 year old circus performer whose parents were murdered by Two Face.  After discovering the Batcave and learning that Bruce Wayne is Batman, Dick becomes “Robin” and hopes to avenge the murder of his parents — much to Bruce Wayne’s disapproval.

When The Riddler — with Two Face’s help — unleashes his brain wave-sucking weapon on Gotham City, Batman partners with Robin to save the city.

After the negative response to 1992’s BATMAN RETURNS, Warner Bros. decided to move on from director Tim Burton and replaced him with Joel Schumacher.  Schumacher’s plan was to lighten the tone and aesthetic of Batman on film and create a “living comic book.”  Originally, Michael Keaton was set to return as Batman/Bruce Wayne and pre-production — including creating Bat-suits specifically for Keaton — proceeded with that in mind.  However, after several meetings with Schumacher, Keaton decided to bow out, and was replaced by Schumacher with Val Kilmer.  Kilmer accepted the role without reading the script.  Rene Russo had originally been cast as Dr. Chase Meridian, but once Kilmer came on board, she was replaced by Nicole Kidman who was younger and closer in age to Kilmer.

Lighter and brighter than its two Tim Burton-directed predecessors, BATMAN FOREVER was a huge hit at the box office and for Warner Bros. in 1995.  As a result, the palate-cleansing soft reboot of the Batman film series was deemed a success.