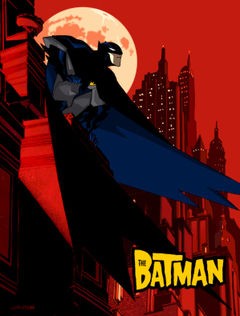 THE BATMAN was an animated TV program produced by Warner Bros. Animation based on DC COMICS‘ Batman. The origin of the name of the series is that the character is more often than not referred to as “The Batman” in the comic books and other media. The show appeared on the CW Television Network — known as “The Kid’s WB” on Saturday mornings.

The Batman was voiced by Rino Romano. Major characters included Alfred Pennyworth (Alastair Duncan), Commissioner Gordon (Mitch Peleggi), and Barbara Gordon (Danielle Judovits). Villains that appeared on the show included The Joker, The Penguin, Bane, The Ventriloquist/Scarface, The Riddler, Mr. Freeze, Firefly, Catwoman, and many others. 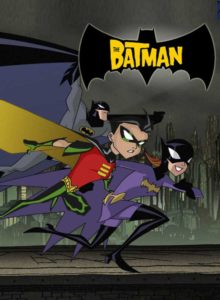 THE BATMAN was not set in the continuity of the previous animated Batman series — BATMAN: THE ANIMATED SERIES — or its spin-offs. It also does not totally adhere to the Batman mythos established in the comic books. For example, many characters — notably The Joker — were “re-imagined” for the series. But overall, THE BATMAN was an accurate and loyal interpretation of The Batman and his universe.

The series spun off into other media as well. THE BATMAN STRIKES was a monthly comic book published by DC COMICS set in the continuity of the TV series. THE BATMAN VS. DRACULA is a animated, straight to video movie based on THE BATMAN television program.

SEASON 2 (2005)
The Cat, the Bat and the Very Ugly
Riddled
Fire & Ice
The Laughing Bat
Swamped
Pets
Meltdown
JTV
Ragdolls to Riches
The Butler Did It
Grundy’s Night
Strange Minds
Night and the City