BATMAN BEYOND (BATMAN OF THE FUTURE outside the U.S.) was an animated TV show produced by Warner Bros. in partnership with DC COMICS. It originally ran on “Kid’s WB” on Saturday mornings from 1999 to 2001, producing 52 original episodes. It also spawned one direct-to-video movie BATMAN BEYOND: RETURN OF THE JOKER in 2001. BEYOND is considered part of the continuity established by BATMAN: THE ANIMATED SERIES in the early 1990s, and later continued in JUSTICE LEAGUE and JUSTICE LEAGUE UNLIMITED.

BATMAN BEYOND is set in a future Gotham City — “Neo Gotham” — some 50 years after the events of the present-day “Animated DC Universe.” Gotham is a darker and more futuristic city, laden with high rises and hovering/flying vehicles, reminiscent of BLADE RUNNER. An aged Bruce Wayne is having increasing trouble handling the criminals he once took down with ease. Disadvantaged by age and heart trouble, he is forced to betray his hatred for firearms by threatening a criminal with a gun and subsequently decides to give up the Mantle of The Bat. In other words, Bruce quit being The Batman.

Several years later after his retirement, Bruce rescues a kid named Terry McGinnis outside of Wayne Manor from a group of “Jokerz,” a gang of hoodlums who have adopted the look of The Joker. Bruce saves Terry, but his heart condition acts up and Terry has to help Bruce back into the Manor.

After getting Bruce his medication and staying until he falls asleep, Terry accidentally discovers the entrance to the Batcave, and finds the old Bat-suit. He “borrows” it to avenge the death of his father (who had accidentally found out about the production of a secret biological weapon at WayneCorp where the elder McGinnis works). As crime and corruption once again becomes a problem in Gotham, Bruce finally gives Terry his permission to assume the Batman identity.

While Terry is the one fighting crime in the Bat-suit, it is clearly Bruce who is the mastermind behind “The Batman.”

McGinnis continues the battle against crime, trained and tutored by Bruce, and aided by a new black-and-red, high-tech Bat-suit (the last one used by Bruce Wayne) that enhances his abilities, fires Batarangs from the wrists, flies using jets fired from the boots, allows eavesdropping through a hypersensitive touch microphone, and provides Batman camouflage abilities.

The new Batman has his own rouges gallery — the shapeshifting Inque, the hypnotist Spellbinder, sound expert Shriek, the deadly assasian Curare, the African hunter Stalker, and his “arch-enemy,” Derek Powers.

Powers, was a ruthless billionaire who took over WayneCorp and was later accidentally transformed into a radioactive monstrosity known as Blight. It was Powers who had Terry’s father murdered after Mr. McGinnis discovered Powers was developing a biological weapons program.

The new Batman also met up some of the “classic” Batman villains that Bruce once took on — Mr. Freeze, Bane, and even The Joker himself (in BATMAN BEYOND: RETURN OF THE JOKER).

Terry finds a reluctant ally in Commissioner Gordon — that’s Barbara Gordon, the original Batgirl. Barbara quit being Batgirl many years ago and it is implied that Bruce and Barbara once had a romantic relationship. For most of BEYOND’s run, Bruce and Barbara’s relationship is cold.

Terry’s other “partner,” if you will, was Maxine “Max” Gibson — a 17-year old computer genius who figured out Terry/Batman’s secret. Since she discovered Terry’s alter ego, Max begins helping him with everything from computer hacking to excuses for Terry’s girlfriend, Dana Tan. Many fans once thought that Max would become either Robin or Batgirl, but that never came to pass.

It was also disclosed in RETURN OF THE JOKER that both Tim Drake and Dick Grayson are still alive, but have no relationship with Bruce Wayne.

In the JUSTICE LEAGUE UNLIMITED episode titled “EPILOGUE,” it was revealed that Bruce Wayne was actually Terry’s biological father. 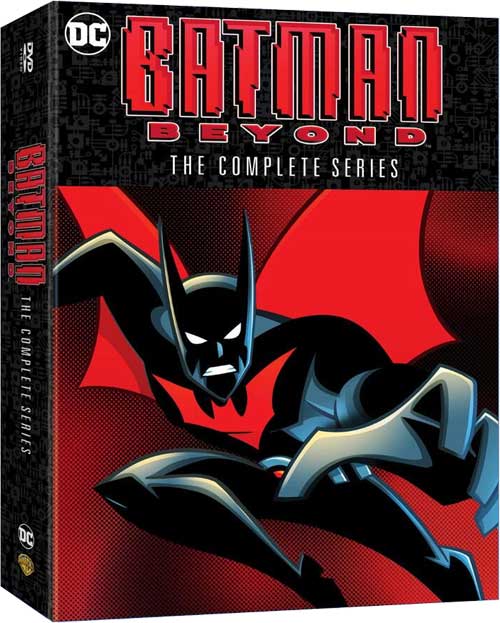