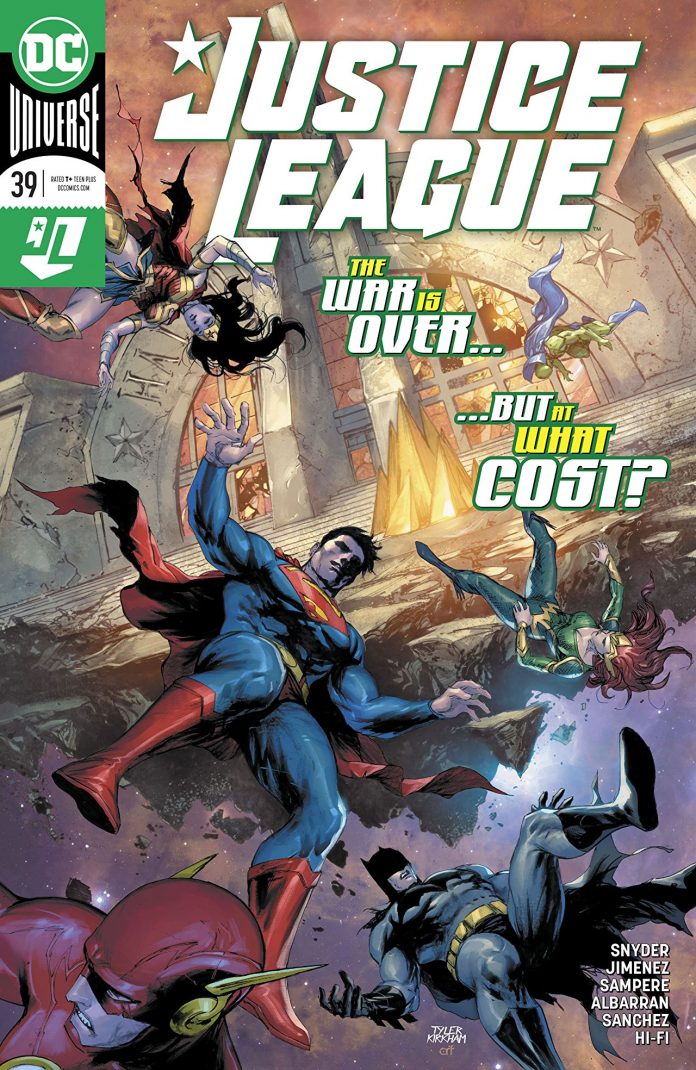 SYNOPSIS: In the wake of the Justice/Doom War, the Justice League finds themselves stranded at the far end of the universe and facing a challenge they’ve never faced before. But what will they find on their journey? Has their battle with Perpetua had consequences reaching farther across the cosmos than they ever imagined? Superstar scribe Scott Snyder says farewell to the Justice League with a special story that both winds down all the things he started in issue #1-and nods toward everything that comes next in the DC Universe.

At this point, I’ve been reviewing Justice League for nearly a year and a half. That’s a fair bit of time and for the entirety of my reviewing tenure, Scott Snyder and James Tynion IV have essentially been telling one story that was seemed destined to conclude in the epic “Justice Doom War.”

Snyder had really been telling this tale for even longer, going all the way back to Dark Nights Metal and beyond. The story would grow to pull in elements from the distant past of DC publications. Justice League became Snyder doing his most Snyder-y world-building and mystery weaving. I sang the praises of this run nearly every issue, with shockingly few missteps along the way. The finale of the “Justice/Doom War” promised to be the climax of this multiverse spanning narrative and epic confrontation between the forces of good and evil.

Instead, Justice League #39 has proven to be a pretty sizable letdown.

In fact, the first time I read the issue I emailed our Editor-in-Chief and asked him to reach out to DC, as I was sure the preview file was incomplete and missing the conclusion of the book. I was thrilled to see the file updated until my hopes were dashed and my confusion returned. One additional page had been added, an advertisement for the new story and creative team that would be taking over the title with issue #40.

I’m actually not going to go too much further into the book than this. Readers have been celebrating Justice League as some of the finest storytelling in modern-day, mainstream comics publication, and I want as many people to read this issue and get to experience its “finale” on their own. I will say that people should be prepared for a finale to the “Justice/Doom War” storyline in itself only, not what has been built up to be the conclusion of the overarching tale itself.

There are some satisfying moments in the book that I don’t consider to be spoilers. Martian Manhunter’s return was set up in JL #38 and the full reveal is here. The character’s revival is a welcome one and the sacrifice that enabled it lands with the emotional significance it deserves. Snyder even uses a very compelling monologue in order to break the 4th wall and pull all of us as readers into the story. However, the results are mixed as they result in the resolution (what resolution there actually is) of the story.

The book is still gorgeous to look at with artwork duties being shared by the ever amazing Jorge Jimenez and Daniel Sampere. Sampere is a fine artist, but after the heights reached by the pairing of Snyder and Jimenez, it would have been nice to see the two close this story together for the entire issue.

There will certainly be more excellent Justice League stories to be told (the final page basically ends with “ok well on to the next thing.”) However, I can’t say that this issue succeeded in making me eager to pick up the next issue as much as it left me wondering what the heck I had just read and disappointed that this section of JL storytelling didn’t stick the landing after the masterful performance leading up to it.

Overall: You’ve come this far, you can’t miss this issue now, but be prepared for an “ending” quite different than the type you had been sold on. – Garret Grev