SYNOPSIS: To save Gotham City, Catwoman will have to commit the greatest heist in the city’s history! But hot on her trail are the Penguin, the Riddler, a horde of assassins, and the master criminal called the Designer! And the most dangerous person standing in her way is the man she’s trying to save: Batman. And what complications will his arise from his new sidekick, Harley Quinn? 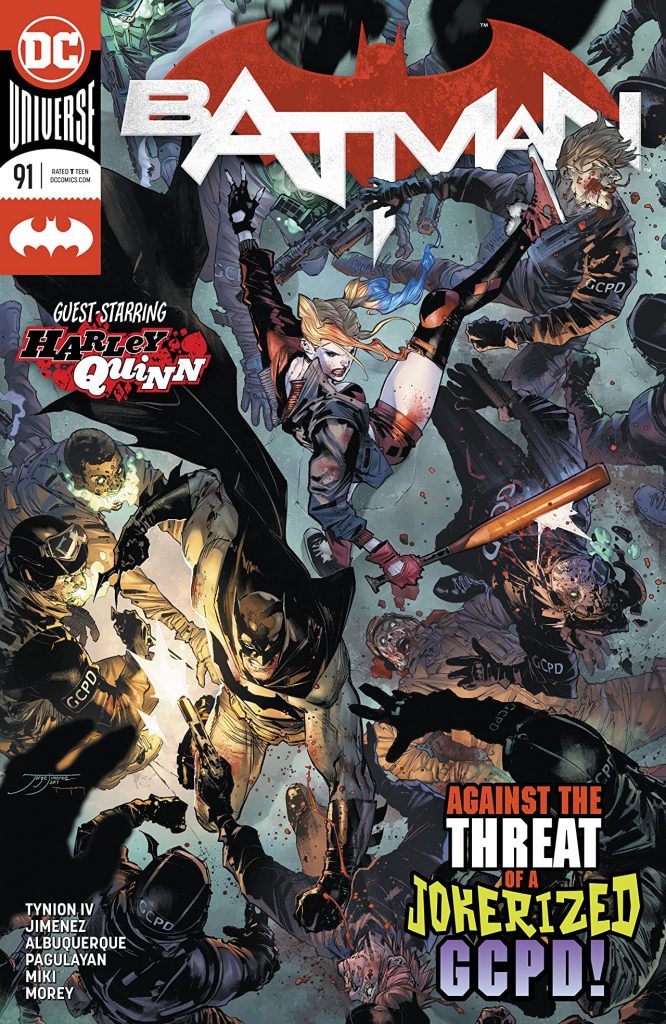 In the previous installment (#90), things started to come together and it finally felt like we were getting to the end of the “Their Dark Designs” story arc.  However, the story has yet again slowed down to a snail’s pace — a several pages of a lot of, well, nothing all that much that simply sets up the next issue.

Essentially, BATMAN #91 features two different storylines: Batman vs. Deathstroke and Catwoman partnering-up with Harley Quinn.  In the former, Batman and Deathstroke trade blows and Batman gives a speech about why he’s Batman while demanding Deathstroke tell him where he can find the Designer.  In the latter, Catwoman and Harley carry on, talk a lot, and fight off a band of the Designer’s minions.

After ALL of that, both storylines reach a conclusion: Batman and Deathstroke realize they have to team-up, and Catwoman’s got a plan to thwart the Designer’s, well, designs.

Like I said, a lot of nothing leading to a “conclusion” that’s only a set up for the next issue.  We apparently are going to have to get through a whole issue (#92) involving The Riddler and his shenanigans.

Speaking of setups, the issue begins with The Joker telling a story to a bartender (see below) that essentially explains what happened when he, The Penguin, The Riddler, and Catwoman first met the Designer, Joker-style.  Ultimately, this has nothing to do with the main story, but it does help set up the upcoming “Joker War” storyline.

Overall, I’ve enjoyed Tynion’s run on BATMAN and “Their Dark Designs” story arc, but I’m now at the “let’s just get on with it!” point. – Bill “Jett” Ramey