SYNOPSIS: The Justice League faces the final extinguishing of our world, invaded on all sides by unimaginable nightmares, fueled on to the edge of oblivion only by the belief that there must be a light in the endless darkness—somewhere. But…what if there’s not? 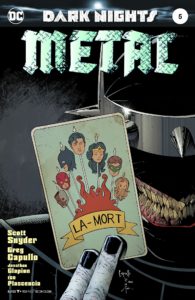 Dark Nights: Metal is an interesting story. It’s a horrific science fiction tale, involving our favorite heroes of the DC universe. Elements have been exciting, others frustrating. A lot of it has been very complex, planting seeds long ago which still waiting to sprout and connect.

Metal #5 connects a few of those roots, but it still seems muddled.

Here, (elderly) Batman and Superman are dodging swings from a Barbatos-controlled Hawkman. Meanwhile, Green Lantern and Mister Terrific are locked up in Thanagar, but reunite with a fan-favorite from the Justice League. Aquaman and Deathstroke find a missing piece at the Earth’s core. And finally, Wonder Woman is taking it to Black Adam, while attempting to grab Carter Hall’s mace, a key component to prevent the planet from falling into the dark multiverse.

I had a hard time following these plot lines…except for Wonder Woman. She is the star of this issue, and that’s mainly because she’s sharing time with the Batman Who Laughs. He interferes in her journey in the most unexpected, and horrifying way, haunting each following panel while delivering eerie dialogue. Scott Snyder has created one of the scariest characters in recent comic book memory. I feel like there’s no way he isn’t going to return in some fashion after Metal ends. Here, he gives a speech to an ailing Wonder Woman. But, in classic Amazon fashion, she finds a way up and ends the issue in heroic fashion: ready to take on dozens of enemies.

I could connect the dots with this plot, but not the others. Earth is about to fall into the dark multiverse, but different items need to come together to produce the Nth Metal to prevent it…..right? Batman and Superman are in the Forge, dodging an enormous Hawkman, then jump into the Earth’s lava and live…..? Green Lantern, Mister Terrific and the surprise JL hero load the plastic egg into a cannon, but it reverses….? I may just be dumb, but I’m not getting all of that. Many (and I mean MANY) readers are understanding Metal and love it. I’m truly happy for them. I’d love to also, but I’m just not.

I do love the art from the always bankable Greg Capullo. Though I don’t care for Barbatos, the opening page in this issue looks incredible. It’s an awesome, Gothic image of a horrific figure on a castle (the Anti-monitor thingy), with Joker dragons surrounding it and lightning striking in the background. That’s an incredible image, regardless of your feelings on the series. He also draws the Batman Who Laughs in exquisite detail, especially with his creepy grin. And that final page, with the Wonder Woman image: perfection. Without a doubt, this book looks amazing.

Metal has a lot to clear up when it wraps up with issue #6 in March. According to Snyder, it’ll be the longest issue of this run. I don’t know if that’s a good thing or not, but I’ll remain optimistic that some of these seeds will finally blossom. – Ryan Lower