SYNOPSIS: Years ago, Jason Todd’s rampage against the criminal underbelly of Gotham led him face-to-face with The Joker and through that conflict, Batman was never the same again! 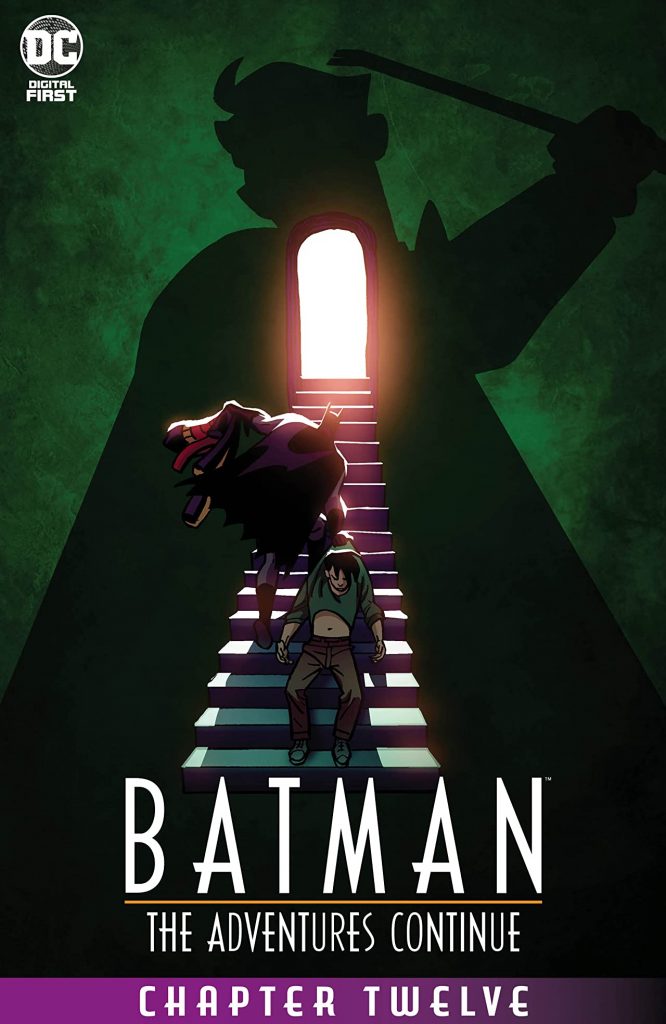 Here it is-the truth of what happened the night Jason Todd “died”! Buckle up, it’s not going to be pretty!

Having been caught in Joker and Harley’s trap, Jason is bound between two giant clown shoes inside Joker’s lair. Given Robin’s recent, let’s say, aggressive actions towards the criminals of Gotham, Joker has resolved to put an end to Jason’s homicidal rage…permanently.

If you’ve read the Batman classic, “A Death in The Family”, you can guess what happens here. Despite this capturing the animated aesthetic of Batman: The Animated Series the violence gets so brutal as The Harlequin of Hate smashes his crow bar again and again into Jason. It gets so bad even Harley is repulsed! Yes, Harley Quinn is not on board with this, so much so that The Joker has his goons carry her away as he continues to bludgeon The Dark Knight’s partner!

Eventually, Batman does swoop in for the rescue, but the situation escalates as the hideout gets rocked by explosions, one even trapping the Clown Prince under his own Jokermobile!

The dying Jason has one wish-that The Batman avenge him, not just on his behalf, but for those The Joker has already hurt and those he will hurt in the future. It’s a similar sentiment to the one depicted in the animated Batman: Under The Red Hood.

Burnett and Dini bring the goods here. There is so much raw emotion that they bring out, ably abetted by Templeton and Kubina! The Joker’s murderous glee, Harley’s shock, Jason’s ravaged body, it all tells the story, making something familiar to longtime Bat-Fans not only feel fresh, but shocking, too. I can’t emphasize enough how good this looks, from character models, color shading, especially during the fire, and panel layout. Batman holding the crowbar, dripping with the blood of his partner, running along the bottom of the page has you wonder what he’s going to choose, even though we know Batman’s one rule is in no danger of being broken.

As Alfred wraps up his tale, Tim echoes many fans’ thoughts as he points out how similar his story is to Jason’s. I’m glad to see the writers address the elephant in the room, particularly from Tim. It builds up his intuitiveness and gives him doubt-is he just Batman’s do-over? Alfred is quick to point out the differences, differences that fans have embraced in his character over Jason.

Despite my belief that this was a 12 issue digital series collected in 6 print issues, Burnett and Dini aren’t through yet, ending the issue in a cliffhanger with the promise of the next installment arriving at the same Bat-Time!

I’m pretty relieved that this series is getting an extension. There was far too much ground to cover in this presumed-final chapter, so this will allow for some breathing room in the storytelling. How much longer the adventures continue for is beyond me, but I’ll take it! These last few issues have been phenomenal so if you haven’t plunked down your dollar yet to read this, do it now! This is some riveting Bat-storytelling! – Javier E. Trujillo