SYNOPSIS: A new day dawns in Gotham and the horrors of “The Joker War” are just being realized. A bold new direction for Batman begins as Bruce Wayne’s circumstances are forever changed. How did the Joker’s rampage affect the citizens of the city? And why does Cole Cash-a.k.a.-Grifter, now work for Lucius Fox?! 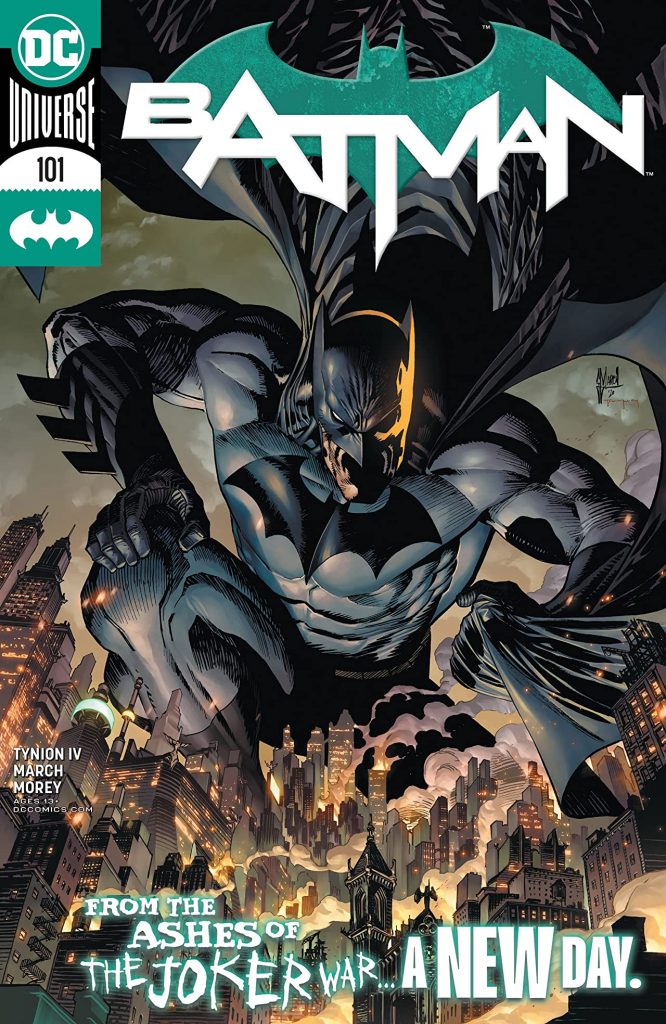 “…I don’t want to waste another minute talking about it…”

This line from BATMAN #101 could be my reaction to James Tynion IV’s run thus far. Let’s focus on what is happening now, and not what’s coming ahead. In a way, this issue serves as more of the same.

After a quick encounter with a DC character some will recognize (I surely didn’t), most of this issue follows a conversation between Batman & Lucius Fox, and Batman & Catwoman.

Tynion uses many panels to quickly summarize where Gotham is after “The Joker War” and where Batman’s head is at in the coming year. You know, talking about what’s to come.

I’ve been highly critical of this from Tynion. “The Joker War” was hyped and I was excited. Issues were hit and miss, with the conclusion being an extra-large issue that focused more on the next chapter than its own resolution. In that regard, issue #101 is more of the same, but I’m giving him benefit of the doubt it’ll land better. We’re getting a Batman/Bruce Wayne that’s going back to the basics, and reminiscent of the 1970’s era. I’m down for that.

Guillem March does a spectacular job with this issue. Speaking of the 1970s, he has many panels that channel Neal Adams and they’re gorgeous. I loved his shots of the blue and gray Dark Knight, as well as his smaller moments with Catwoman. It seems like this was a one-issue deal which is a bummer because this book looks pretty.

This isn’t a must-read and will be split between comic fans. Some will like it for being a setup issue, while others will hate that it’s a setup issue. It’s mostly more talk of what’s to come.

Except for some reason, it didn’t bother me this time around. – Ryan Lower