SYNOPSIS: The riveting new vigilante known as Clownhunter was a breakout star of “The Joker War”- but what’s the tragic origin of this teenage assassin? How did his parents die at the hands of The Joker, and is there a place for him in the evolving Gotham City? Can there be redemption for the infamous Clownhunter?  This epic tale reteams writer James Tynion IV and artist James Stokoe, the storytellers behind the definitive Clownhunter tale from Batman: The Joker War Zone #1! 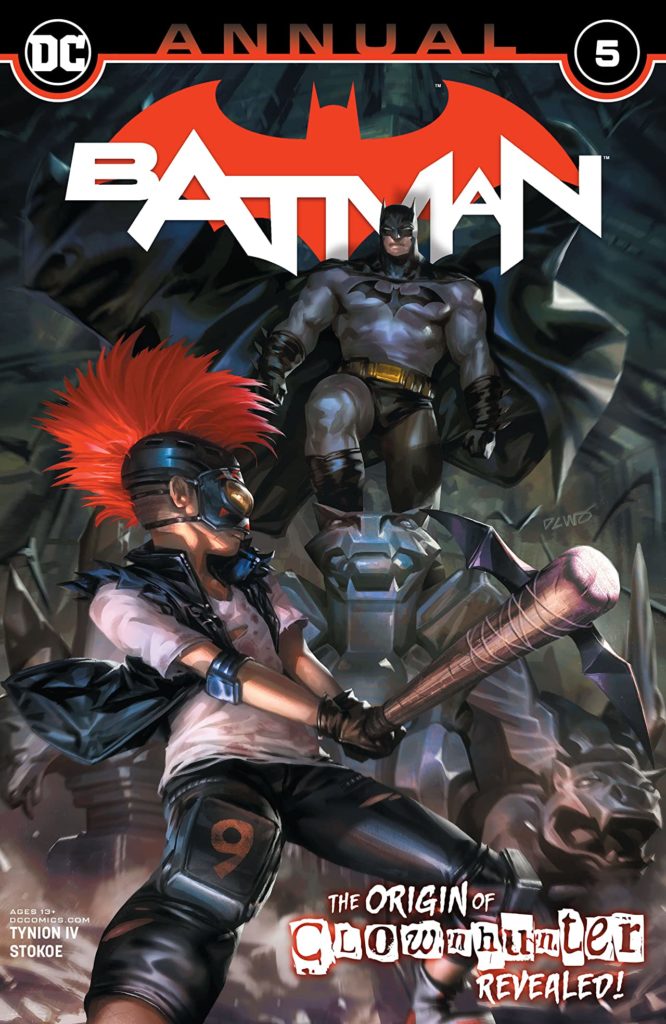 Wrapping up this final DC comic release day of 2020 is BATMAN ANNUAL #5, written by James Tynion IV and illustrated by James Stokoe. Annual issues have a history of not being crucial to the current storylines, and more of a standalone, with quite a few issues dealing with an origin or flashback of a certain character.

That’s exactly what we get here.

Tynion’s new obsession in the main BATMAN title is a kid called Clownhunter. He came to prominence during the “The Joker War” and has been inserted into the past few issues. While the character was somewhat already developed, here we get his origin tale and the demise of his parents (which was only alluded to before). While The Dark Knight does pop in (very briefly), our other spotlight goes on another savior of Gotham City, Leslie Thompkins. She returns home in Crime Alley and is visited by Clownhunter, who proceeds to share with her who he is and how he came to be.

I’ll come right out with it here: this wasn’t a bad issue. The story unfolds in an interesting way, and Tynion does a good job hitting the emotional beats. The motivations for Clownhunter (Bao) are clear and make sense. My only problem is that I just don’t care. I haven’t cared for this character since he first appeared, and it seems like Tynion is forcing him on us even more (which never ends well). I know Clownhunter will be popping up in more Batman stories down the line, and despite these newly added details, it just doesn’t excite me.

The art from Stokoe was pretty great. I loved the original look provided, and how he sold an uneasy and dark atmosphere. It comes across as an organized sloppy, and I mean that as a positive. I don’t think I’ve come across his art before but he’s on my radar now.

Overall, the issue was all right, maybe even creeping toward good. It’s just this was called BATMAN and I didn’t get any Batman. Change the name of this issue so we fans don’t feel duped. Because many will and there won’t be smiles on their faces. – Ryan Lower