SYNOPSIS: Following the tragic events of Infinite Frontier #1, Batman and his new ally, Ghost-Maker, must reckon with a new gang operating in Gotham City-but are they connected to the reemergence of the Scarecrow? Meanwhile, shadowy billionaire Simon Saint pitches an advanced law-enforcement system to the new mayor! The creative team behind the epic “The Joker War” returns with a thrill-packed, dangerous new storyline called “The Cowardly Lot.” 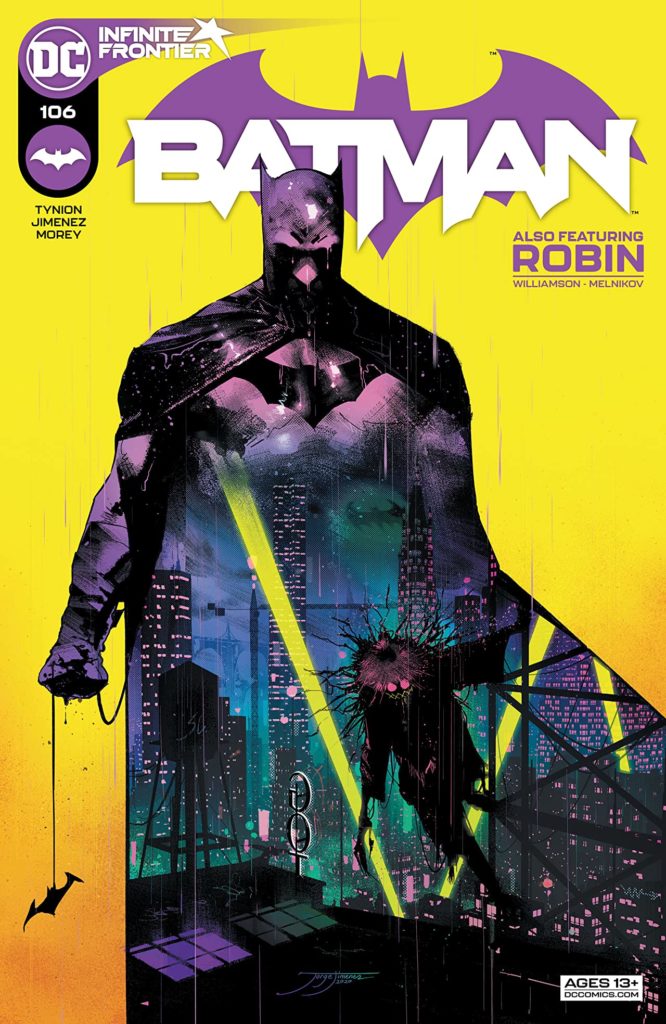 AUTHOR’S NOTE: INFINITE FRONTIER is not essential reading, but does help set up BATMAN #106.

And just like that, we are back to normal with the release of BATMAN #106, leaving FUTURE STATE in the past.

I was looking forward to the 2-month break, as I wasn’t much of a fan of James Tynion IV’s run thus far in one of DC’s most popular titles. Did a break reset the writer, and improve on elements I found troublesome? Yes….and no.

After an attack at Arkham, Batman is taking down a new gang threat, corresponding with the “leader” but never meets face-to-face. Meanwhile, he retreats to his new “Batcave” within the city, sharing space with his new partner Ghost-Maker. Harley Quinn is on a rooftop because of a reason. Mayor Nakano is deep in talks with a man who is creating a new way to fight justice, calling it the Magistrate. Plus, the Scarecrow is lurking around Gotham City.

Let’s start with the negatives so we can end positively. Tynion is continuing to push threads that I had no interest in prior, mainly Ghost-Maker. I don’t think this character’s current position was earned and makes absolutely no sense to me. It’s an instant annoyance and hurts the book.

Tynion is also ambitious, which I applaud, in setting up a lot of plot points. However, this also hurts the issue because we jump around a lot and the beats don’t feel as focused or meaningful. This new tech crew Batman takes down? It’s futuristic and seems like a rehash of FUTURE STATE. It also teases a new character…which is way overdone by Tynion.

Speaking of FUTURE STATE, we just wrapped up two months of being in that world, which was sort of meant as a break into a sort of ELSEWORLDS. Now, it appears we are going to get to see the journey to the future, which I also have no interest in.

However, there are definitely some positives. First off, Tynion nailed this Scarecrow. He bookends Batman’s storyline and I simply can’t wait to see what he does next. Scarecrow is creepy, deranged, haunting, and has an interesting plan that I can’t put together yet. I loved it.

You know what else I loved? Jorge Jimenez’s work. This guy’s art is a knockout. I adored his pages during “The Joker War” and he has upped his game here. When he teased this new interpretation of Scarecrow, I wasn’t sure what I thought. In context, it’s fantastic. Jimenez is working his way to A-list status, and I’m enjoying the evolution.

There’s also a Robin backup story that I found well done, featuring Damian and Talia. It leaves us in a cliffhanger that’ll continue in this month’s DETECTIVE, and I’m intrigued.

Overall, BATMAN #106 is a mixed bag, but with a slight edge toward the positives. While Tynion continues to unveil his story in ways that just don’t click with me, he’s introduced an effective version of Scarecrow that has me hooked. Plus, Jorge Jimenez knocks it out of the park with his art. I may be setting myself up for disappointment, but I’m optimistic about next month’s follow-up. – Ryan Lower