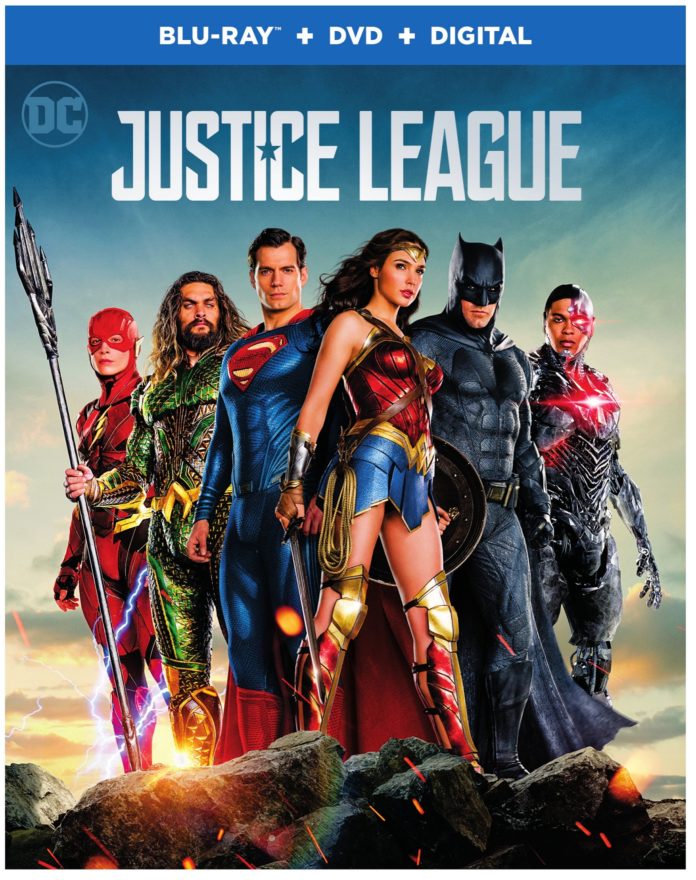 You know when you’re hungry, and there’s a store nearby where you can get whole, fresh food…yet you decide to go next door and order a double cheeseburger from McDonald’s instead? That’s how I feel about Justice League.

In a world of Whole Foods, it’s a cheap, greasy double cheeseburger.

Sure, it’s not great. But when you’re in the mood, it’s satisfying.

A month ahead of the Blu-ray release, Justice League is now available to buy digitally. I decided to go ahead and take the plunge to save myself the time and a little money. Lord knows we’ve talked about this movie to death, but I’ll share a brief review so that we can get to the real reason behind this review: the bonus features.

I enjoyed Justice League. There was some good (Batman’s opening scene, Wonder Woman, the Amazons), some bad (“I don’t…uh…not like you”, poor CGI) and plenty of “just okay.” The film as a whole was somewhat refreshing because it was simple. Yet for being the first Justice League film, it should have been better. Those are my quick thoughts on the film.

Since before the movie was even released in theaters, fans have wondered if we’ll get multiple versions of the film when it’s released for home viewing (like Batman v Superman and Suicide Squad). Given all of the behind-the-scenes drama, not to mention footage/images released in trailers but cut from the theatrical release, a longer version would become available….right?

Wrong. Aside from two quick deleted scenes, the version you saw in November is what we have available to buy on digital. Now to the bonus features.

Return of Superman: (2 minutes) This is the piece WB is leaning on to sell the movie, which really makes me scratch my head. I won’t go into that. Instead, what we get is Superman back in his Kryptonian ship, reuniting with his suit (and walking by a black one). Then, we get the scene we saw in the Comic Con trailer last summer of Superman paying a visit to Alfred. The two scenes together equal 2 minutes, and I would have liked to have seen them inserted into the film.

Road to Justice: (14 minutes): For the uninitiated, this feature gives us a quick history of the Justice League. It’s a cool lesson from the some of best in the comic book world, including Geoff Johns, Jim Lee, Dan DiDio, Marv Wolfman, Grant Morrison and more. Informative, and engaging, it’s a fun piece for comic fans.

Technology of the Justice League: (8 minutes): The title is a little misleading, as we only get a deeper look into three different pieces of technology: the Knightcrawler, Cyborg’s suit and the Flash’s suit. Nothing interested me much here, but it’s cool to see the designers get all excited about their work. But it was weird having a narrator that sounded like someone from the DC All Access, rather than one of the cast members, or production staff.

Justice League: The New Heroes (12 minutes) Another piece giving history about the newcomers. Hosted by Ray Fisher, we get a bit of history on Cyborg, Aquaman and the Flash. The highlight for me was seeing the behind-the-scenes footage. If you’re new to the DC world, this is another good informative piece on these heroes.

Steppenwolf the Conqueror: (3 minutes) Three minutes on the movie’s main villain, of whom most of the audience was unfamiliar. I think that speaks for itself.

Scene Studies: (15 minutes) This is what I’ve been looking forward to. Split into 4 parts, the Scene Studies are brief, in-depth glimpses into filming certain scenes from the movie. We see the making of the return to the Themyscira, Wonder Woman’s London rescue, the Heroes Park fight and the Tunnel Battle. I wish we could have had an extensive look at these, and more of them. I really enjoy seeing behind-the-scenes stuff and making of a scene. These were my favorite part of the bonus features.

Suit Up: The Look of the Justice League: (10 minutes) This was another fun piece that closely looked at the costumes of each member of the league. I’ll admit, I wasn’t sure how I’d feel about all of their costumes, but I dig ‘em.

The League: (14 minutes) Not sure if this is exclusive to digital, but here is a whole section of fluff. Covering each of the six members, split into their own frame, we get a visual history lesson (again), images of each character from the movie, and some stills from comics. There’s nothing wrong with it, but I want Justice League (the movie) extras.

Overall, I found the extras to be of the same quality as the movie: okay. Some parts were really good (Scene Studies), some bad (Steppenwolf the Conqueror), and a lot of just okay. It’s rare for someone to buy a movie based purely on the extras. However, if that’s you, don’t roll the dice here. Buying the digital version of Justice League should be based on if you enjoyed the movie. I did, so I didn’t mind shelling out $20. And now I’m also hungry for a burger. – Ryan Lower