SYNOPSIS: Man-Bat has been hunted by the Suicide Squad, beaten to a pulp by Batman, shot at by the police, and terrorized by Scarecrow. ENOUGH IS ENOUGH! In this explosive conclusion to the tragic tale of Man-Bat, Kirk Langstrom will need to fight off the hordes that hound him, rescue his loved ones from the clutches of a madman, and do it all before the Man-Bat serum coursing through his veins eats him alive from the inside out. Do not miss this epic final act! 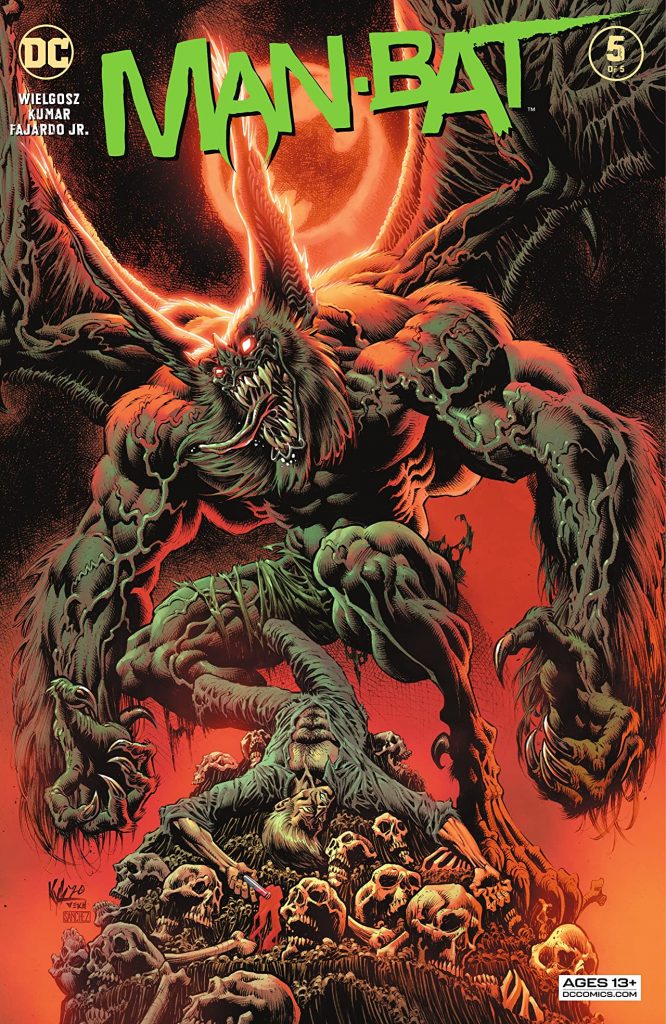 Man-Bat has been a big sleeper for DC since its first issue.  Surprising readers with its all-out comic book shenanigans while deeply rooted in a character who can’t get out of his way.  Dave Wielgosz concludes this volume in grand fashion. An excellent three-way showdown, Batman vs. Man-Bat vs. Scarecrow, a proper heavyweight fight.

Wielgosz outdid himself on this title; coming in, I knew he was an editor of Batman, so he must have a great memory and vast knowledge of the DC Universe, but could he write? I was unfamiliar with any work that he had before this title; I am now a fan of Wielgosz.  Man-Bat is every comic book reader’s dream.  Man-Bat is a story about a guy trying to make up for his mistakes, tripping over himself at every chance, but he is redeemed at the end of the arc!

The character that steals the issue is not who you would expect.  Francine Langstrom goes full Holly Gennaro in this issue; she is no damsel in distress.  Both Langstrom’s had beautiful character moments in the book.  Kirk Langstrom had an inter conflict with Man-Bat that we get to see unfold.  Wielgosz writes a tremendous back and forth from inside the mind as Kirk tries to regain dominance.

This book is action-packed. You got Francine vs. Scarecrow, Batman vs. Man-Batman, and Kirk vs. Man-Bat all happening at once. Wielgosz does a fantastic job juggling all this chaos; the story flows well from one page into another. There is no dull moment in this book; the Batman/Man-Bat fight alone is more than you get in most comics.  In Man-Bat #5, Wielgosz provides three action scenes on that scale; thank you!

Sumit Kumar is another creative I discovered on this title, and I have enjoyed his work from the first issue.  In this final issue, Kumar was giving me vibes of Jae Lee at times.  I know Jorge Jimenez is the big guy on Batman right now, but I have to admit I love this simple design of Scarecrow Kumar drew.  It’s classic vintage yet can be scary without being over the top; it’s perfect.  Those glowing eyes and that stitched smile do wonders.   The Batman/Man-Bat was impressive and took up most of the issue.  The reader will have their jaw on the floor the whole time this fight goes sky high.  The mental moment between Kirk and Man-Bat was a highlight with easter eggs to the previous issues in the background.

Man-Bat has been five issues of comic book bliss.  Kirk Langstrom and Man-Bat take on Batman, the Suicide Squad, Scarecrow, and his past in five issues.  Not bad for a villain who has been MIA for a minute. Each issue was full of deep emotional drama and just as much off-the-wall action a reader couldn’t ask for more.  Wielgosz and Kumar have gone above and beyond with this title.   All five of these issues should have been on your pull list every week.  I hope this one gets a hardcover. I know I’ll at least pick up the trade; it deserves that support for sure.

I hope we see more solo villain mini-series in the future.  We are off to a good start with Tynion and March’s Joker and Wielgosz and Kumar’s Man-Bat.  Would you like to see more of this mini-series? Sound off in the comment section below. – Peter Verra