SYNOPSIS: Public enemy number 1: BATMAN! Public enemy number 2: Bruce Wayne?! When both Bruce and his alter ego are implicated in the same crime, the cops have some questions – and the Dark Knight is going to have to think quick or risk his identity being exposed to the world! But law enforcement isn’t the only entity hunting the Bat-the titanic MR. WORTH is ready to use all his money and power to see Batman six feet under! 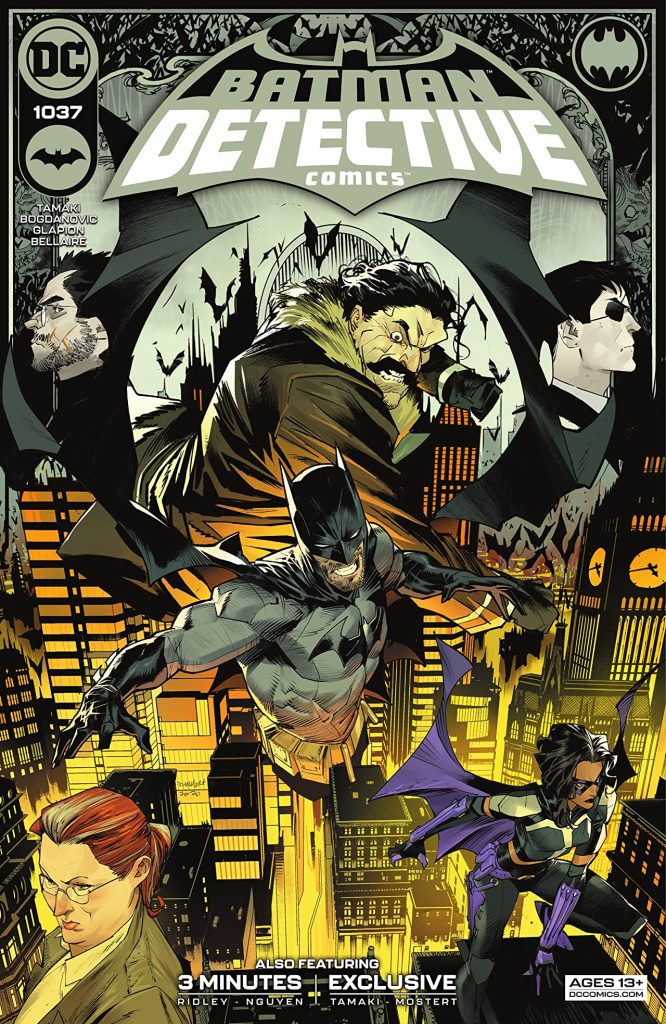 Detective Comics is arguably the best Batbook to hit comic shops monthly, and only Batman/Catwoman comes close.  Tamaki is shaping a tale that will bring you back to “Bruce Wayne Murderer?” with a fresh twist.  Bruce Wayne finds himself in the middle of a murder mystery, but is it the real killer he should fear, or is it the father of the deceased? Tamaki takes you on the thrill ride of the month in issue #1037.

This is one hell of a comic book!  Tamaki brings her A-game in this issue.  She gives you tons of information to process about Sarah Worth’s murder, Bruce Wayne, old money Gotham, then throws Batman into the mix.  While Batman is not in the issue that much, you hardly notice.  Here we have a Bruce Wayne story, and Tamaki captivates the reader from page one.  Tamaki does a fabulous job at moving this story forward; never once is there a dull moment.  With every page turn, you get more and more mesmerized by her words.  The story’s pacing is excellent; Tamaki finds ways to let the story breathe even though you go from one critical scene to another. The story is so intertwined with its environment it is a beautiful display of her talents.  There is always tension throughout the book, from Huntress discovering the body to Bruce Wayne’s interrogation. There is always an edge-of-your-seat feeling about this book.  Tamaki opens the book with some Huntress goodness and ends it with the Batman extravaganza.  The ending of this book is the most fun you will get out of a comic this week!

There are two backup stories in this issue.  Tamaki wrote one of them, who, in the previous issues, had stories centered around Huntress.  This one is a bit different, as the reader follows Gotham journalist Deb Donavan on a story.  This story is not as good as the others written by Tamaki.  Maybe I’m not invested in Deb Donavan as I am Huntress, but this seems a bit slow.  The second backup story is written by John Ridley, the writer of The Next Batman.  This one is fantastic; a Batman story centered around a “gentlemen’s debate” between Alfred and Lucius Fox.  Ridley does a fantastic job showing the reader that not all bullets are fired in the field.

Dan Mora is not our interior artist on Detective this issue; instead we have Viktor Bogdanovic.  Bogdanovic’s art will give you vibes of Greg Capullo.  Bogdanovic draws a wonderful book, but it is not action-heavy, not that I can fault with that.   Huntress has a grand opening, and Batman has an epic entrance at the end of the book.  There is a great Batman panel of the Dark Knight at sunrise that will catch your eye.  The Oracle/Huntress montage panel was a fantastic piece and might be my favorite panel in the book.   Bogdanovic shows his wide range of facial emotion in the book, the look of a man fearing for his life, the grin of a man disturbed, the surprise of Bruce Wayne to the anger and rage of Mr. Worth there is a lot for Bogdanovic to work with.  If you are a fan of art, there are tons of “the little things” that are display and Bogdanovic shows off his talents.

What is so great about Tamaki’s writing is that you cannot predict where she will lead you.  You can try and cheat and guess, but you are so far off.  She takes this book in a direction that I was not expecting, and I ended up loving each word bubble on every page.  This arc is starting to feel like an instant classic, we still must see how it will play out, but this has all the makings.  The mystery of a dead neighbor, a Batman in an unfamiliar situation, a Bruce Wayne who can not avoid the public eye at all.  What an exciting direction to take Batman, and what an enjoyable book.  Don’t miss this one! – Peter Verra