EDITOR’S NOTE: The following review contains things that some might consider a spoiler.  I don’t think so personally, but just an FYI. – Bill “Jett” Ramey 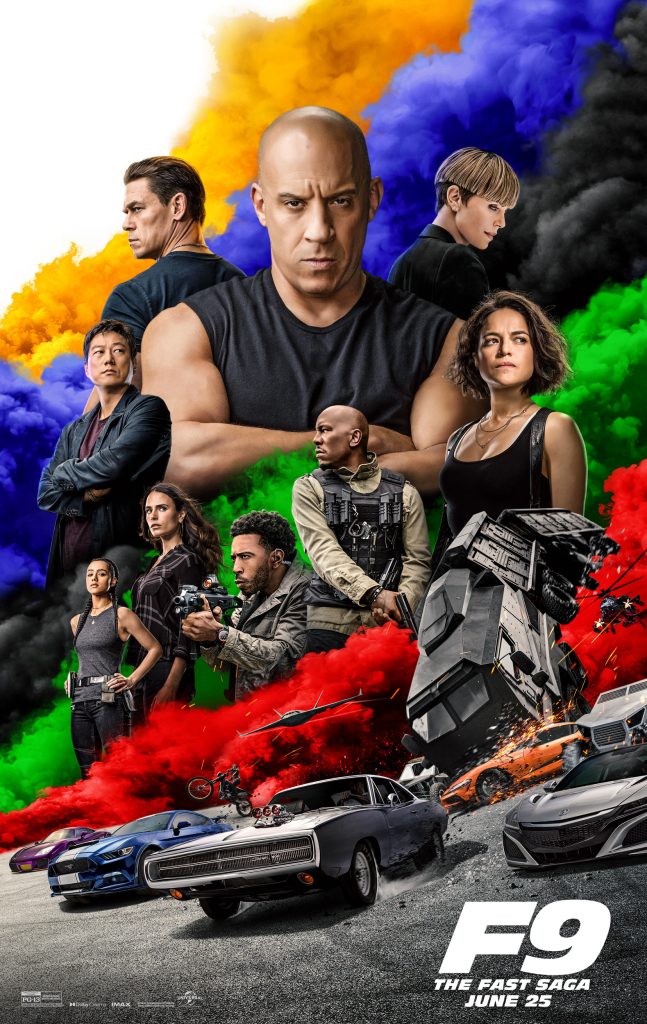 F9: The Fast Saga reunites Dom Toretto’s (Vin Diesel) core team as well as some returnees from earlier films in the series. Soooo…check logic at the door, enter total suspension of disbelief mode, and enjoy the extreme stunts you came to see. It might also help to ignore the laws of physics. Get ready for fun with magnets, immortal cars, high-flying crashes and explosions, and heroes emerging from heavy-duty violence with nary a scratch.

Plot and acting are completely peripheral to car chases, explosions, many vehicle crashes, and cliché-ridden dialog. But then again, you didn’t come to see award-winning performances or worry too much about plot holes. However, we are graced by the presence of Helen Mirren as Queenie, Charlize Theron as Cipher, and Kurt Russell as Mr. Nobody. Their screen time is brief but dazzling. More, please!

The story is heavily dependent on flashbacks to young Dom (Vinnie Bennet), Jakob (Finn Cole), and Mia (Siena Agudong) at their Dad Jack’s (J. D. Pardo) final race. He doesn’t survive, and young Dom goes to prison for exacting revenge on the person he thinks is responsible. As a result of what he learns in prison and immediately after his release, he and his brother Jakob become estranged. Only Mia stays in contact with Jakob, unknown to Dom.

Fast forward (no pun intended) to the present, and we find Dom and his wife Letty (Michelle Rodriguez) living off the grid raising Dom’s son Brian. Adult Mia is played once again by Jordana Brewster, and adult Jakob is played by John Cena.

Roman (Tyrese Gibson), Tej (Ludacris), and Ramsey (Nathalie Emmanuel) track them down to inform them that Mr. Nobody’s plane, carrying a captured Cipher, has been shot down and Cipher has been extracted. They want Dom and Letty to come along to inspect the crash site. Dom refuses until he recognizes Jakob in the video distress signal. Dom’s greatest desire at this point is to find and confront Jakob and destroy him for his role in their father’s death.

Jakob has become a rogue CIA agent who is looking for a new secret weapon called Aries, a device that can hack and hijack any weapons system rendering them useless. Of course, there must be an arrogant, amoral, ridiculously rich villain who wants to control the world funding the search. In this case, it’s Otto (Thue Erstad Rasmussen).

Looking for Jakob, Dom and his team run into Han (Sung Kang), whom they thought was dead, who now travels around in secret with a young Asian woman, Elle (Anna Sawai), also fighting international crime. How he comes to still be alive, and Elle’s role in the search for Aries, I will leave for you to discover.

Needing technical help, Dom and the team look up some old pals, Sean (Lucas Black) and Twinkie (Shad Moss), who’ve been working on space weapon technology with a scientist named Jason (Earl Hu). Space, you say? Oh yeah. But you’ll have to see the film to find out how a satellite is involved and why! Hint: it’s quite entertaining.

Filming locations include Tbilisi, Georgia, Edinburgh, Scotland, Greenham Common, England, and Thailand to keeps things interesting. The real stars of the film are the vehicles and stunt drivers, as usual. As has come to be expected, there’s a tag at the end that suggests another film is coming.

I did have a couple of problems with the film. At almost 2 ½ hours, it’s about 30 minutes too long. This trend toward very long movies that are short on substance but big on style is not one I’m liking. I mean, too many impossible escapes and gigantic explosions can become a bit tedious while you’re waiting to see what eventually happens – even though the endings of these films are quite predictable. Also, the dialog and the actors’ lips often appeared to be out of sync. I found this distracting and can’t figure out why this happened. In particular, the actor who played young Dom at times seemed to have Vin Diesel’s voice dubbed over his. Why do that when the actor was doing fine with his own voice and Diesel’s voice is so recognizable?

F9 will do well because this franchise knows its audience. It’s done some impressive box office in Europe where it’s already been released. That said, if you’re not a fan of the franchise, F9 may not be for you. There is a nod to the late Paul Walker who died during the filming of FAST & FURIOUS 7. Boy, do I miss that guy! – Jo Hyde