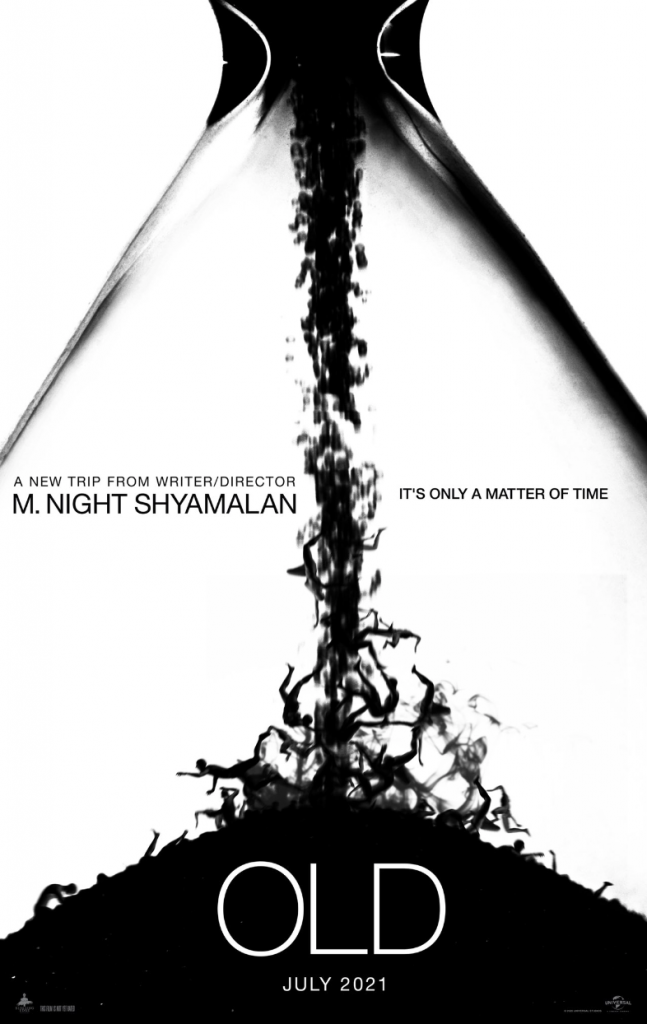 It’s sort of like peaking in junior high. You are bright, popular, and show great promise. But after one very successful project, you never live up to that promise. That’s how I feel about M. Night Shyamalan.

After the enormous success of The Sixth Sense, none of his films has been as compelling. Some were pretty good, like Unbreakable. Others not so much, like The Village and The Last Airbender. I’m afraid that his new film Old falls into the latter category.

Whatever you think about the film based on the trailer, it’s not what you think it will be. I’m not going to reveal any major plot points so that if you decide to see it, what suspense there is won’t be spoiled.

Just looking at the title, I thought it might be a little satirical, given Americans’ anxiety about aging and death, but it is not. Briefly, it’s about a family on vacation, who go to a remote beach with a few other families, and soon discover that everyone is aging very rapidly.

The family at the center of the narrative consists of Guy (Gael Garcia Bernal), his wife Prisca (Vicky Krieps), and their children, Trent (Nolan River) and Maddox (Alexa Swinton). Trent and Maddox are 6 and 11 as the film begins.

Joining them on the beach are Charles (Rufus Sewell), a doctor, his mother Agnes (Kathleen Chalfant), and his wife and daughter Chrystal (Abbey Lee) and 6 year old Kara (Kyle Bailey).

Another couple, Jarin (Ken Leung) and Patricia (Nikki Amuka-Bird) are also there, as well as a famous rapper with the unfortunate name Mid-sized Sedan (Aaron Pierre).

All were guests at an exclusive resort run by an overly-eager manager (Gustaf Hammersten) and his assistant Madrid (Francesca Eastwood). After being offered a special excursion to a beautiful, private secluded beach, a driver (M. Night Shyamalan) drops them off and leaves, saying he’ll be back at 5 pm. He doesn’t accompany them to the cliff-surrounded beach which can be reached only via a creepy, claustrophobic tunnel. The group has their doubts but are pleasantly surprised by the pristine beach.

Not long after their arrival, things start to go awry. Each family has secrets they are trying to hide, but oddities soon start to emerge. Tension begins to arise, and then, they notice the alarming aging process. Adult actors can be aged with make-up and prosthetics, but aging children require different actors.  Trent at 11 is now played by by Luca Faustino Rodreiguez, at 15 by Alex Wolff, and as an adult by Emun Elliot. Maddox at 16 is played by Thomasin McKensie, and as an adult by Embeth Davidtz. Kara at 11 is played by Mikaya Fisher, and at 15 by Eliza Scanten.

Performances are not up to par. I fault the script and the director for this. Dialog is stilted and unnatural. It’s almost as if the actors are doing a table-read before they really get into their characters. It leaves the audience never really identifying with the characters, and therefore, not caring much about what happens to them. The necessary tension and suspense necessary in a thriller — like Old — is supposed to be, greatly suffers as a result. The pace of the film lags too, which doesn’t allow for a sustained line of suspense.

Old was filmed in the Dominican Republic, so I was surprised that the resort and beach scenes weren’t more compelling. They seemed uninviting, perhaps to foreshadow the various outcomes of the narrative, but I really can’t say that was successful. Actually, annoying would be a better descriptor.

Transitions were too often accomplished by going to an empty gray screen for a few seconds, which to me, was deadly for the film’s pace. I was more than ready for the film to end long before it did. Shyamalan filmed Old in 35 mm rather than digital, and the camera work seemed clumsy. Editing might have had something to do with that also.

With Shyamalan, I’m always hoping for a film equal to The Sixth Sense, but Old isn’t it. – Jo Hyde