SYNOPSIS: It was the smooch heard ‘round the world…and it’s the one thing Damian Wayne DIDN’T see coming his way in the Lazarus Tournament! As Robin battles for the secrets of eternal life against the deadliest killers on the planet, can he-will he-DARE HE-survive…a girlfriend? 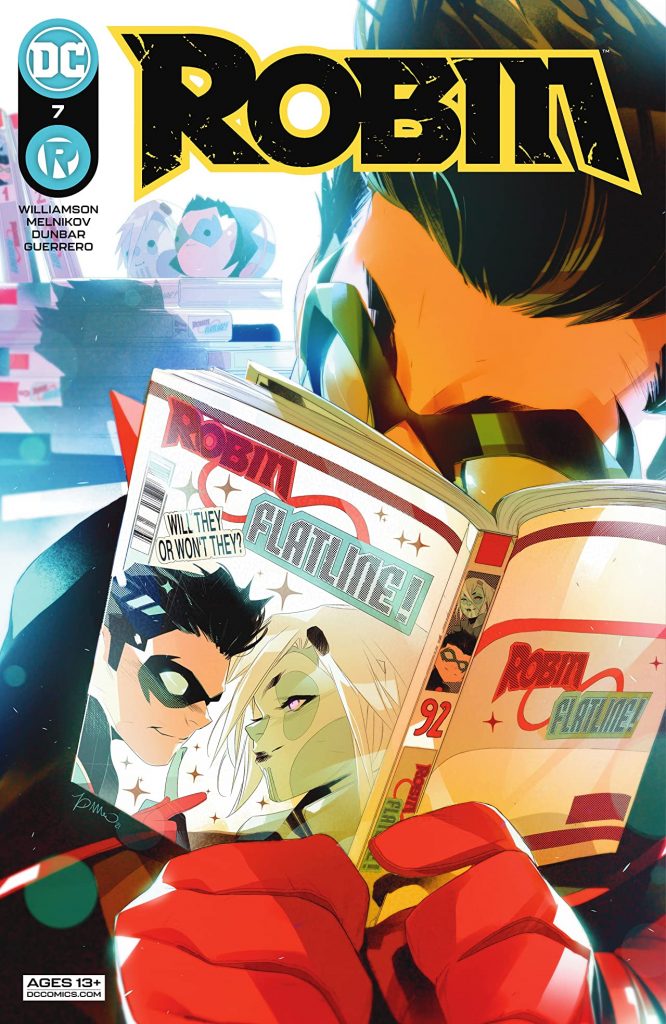 The fighting gets more intense and personal as we are now at “The Final Four”. Williamson opens up with Robin versus Respawn, hinting that Damian has somehow wounded the mysterious combatant in the past. That doesn’t exactly narrow down the list and even the clue of white hair doesn’t help me deduce their identity. Guess I’ll just keep enjoying the mystery!

One thing that does get cleared up this issue is the secret identity of Mother Soul! While I can’t say it was a shock, it does make a lot of sense. Williamson also adds to the legend of the island, its need for death, and its restorative abilities. It gives Damian a free pass to relent to his killer instincts if there are no lasting consequences to his actions, but it still felt weird to me that he was killing people in this issue.

The two main fights that are featured once again are Robin-focused, leaving the others “off-camera”. I’m glad Williamson is keeping the focus on Damian. It lets him have some character moments amidst the fighting and gives Melnikov and Dunbar space with the layouts. I appreciate how the artistic duo parallels both fights with a similar two-page spread.

The Flatline fight was my clear favorite. As Damian has grown closer to her, it makes it more emotionally challenging for him, the same of which can’t be said about Respawn. Only in comics can characters have deep conversations on the nature of being as they fight to the death! The pacing in this duel also made it stand out. As it reaches its conclusion, the battle is intercut with manga, a character’s heartbeat, and the ghost of Alfred. The dramatic effect can’t be underestimated and makes it stand out, making the readers the clear winner.

This issue felt like a quick read, but was still highly entertaining. I’m looking forward to seeing the final battle between the last two contestants and the ramifications of it! Williamson and Melnikov make a formidable creative duo and have done an admirable job carving out their own little section of the Batcave (or Lazarus Pit)! – Javier E. Trujillo