SYNOPSIS: Street-smart thief Nathan Drake (Tom Holland) is recruited by seasoned treasure hunter Victor “Sully” Sullivan (Mark Wahlberg) to recover a fortune lost by Ferdinand Magellan 500 years ago. What starts as a heist job for the duo becomes a globe-trotting, white-knuckle race to reach the prize before the ruthless Moncada (Antonio Banderas), who believes he and his family are the rightful heirs. If Nate and Sully can decipher the clues and solve one of the world’s oldest mysteries, they stand to find $5 billion in treasure and perhaps even Nate’s long-lost brother…but only if they can learn to work together. 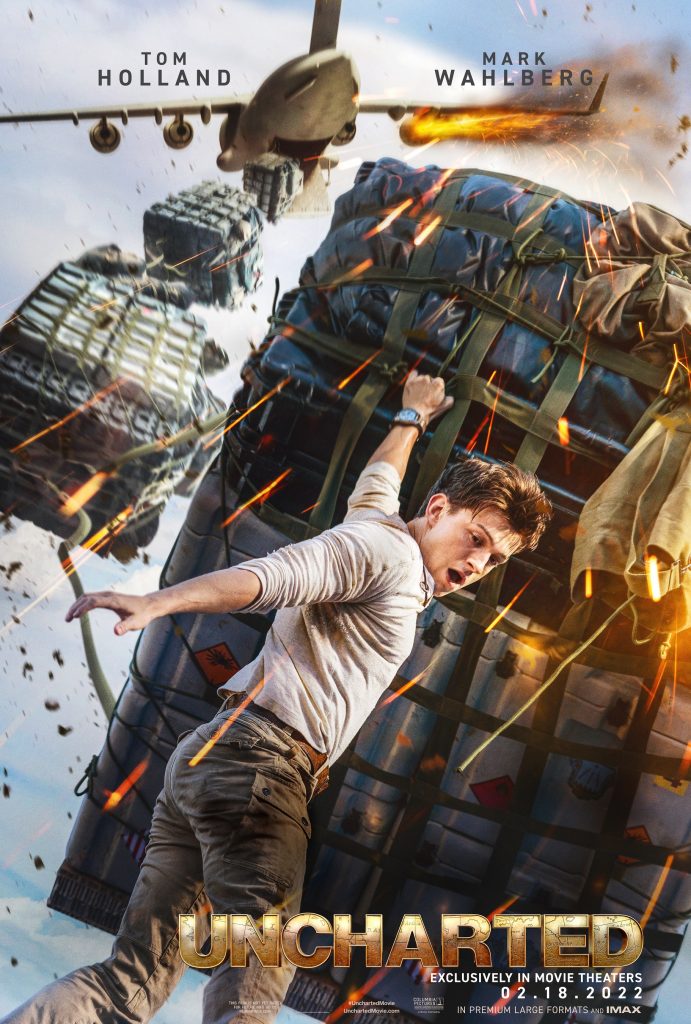 Uncharted is a decent, though not impressive, action film. It’s based on a video game of the same title. I found it a bit uneven which could be due to the fact that three directors dropped out before Ruben Fleisher took over. Also, Mark Wahlberg who plays Victor (Sully) Sullivan wasn’t the first choice for the part. Add to that the whole COVID-19 debacle, and that doesn’t bode well for any film.

The energy in this film comes from the brilliant Tom Holland who plays Nathan Drake. He’s supposed to be the newbie treasure hunter with Sully as his mentor, but he’s a much stronger character. Sully is supposed to be one of those wise-cracking, wryly humorous antihero-type guys, but there’s a problem with Wahlberg’s performance. He isn’t funny. Lines that are supposed to get a laugh fall flat. Holland, on the other hand, has exceptional comic timing and gets laughs when he’s supposed to. Antonio Banderas phones it in as villain Santiago Moncada — not what you’d usually expect from him.

Aside from Holland, Tati Gabrielle as mercenary Jo Braddock brings us another interesting and energy-generating character. She plays a ruthless antagonist to Sully and Nathan. She dominates every scene she’s in. The other female treasure hunter who may or may not be a threat is Chloe Frazer, played by Sophia Ali. She does an adequate job, but she pales in comparison to Tati Gabrielle.

The main narrative concerns Nathan, who as a boy learns from his brother Sam that they are descended from Sir Francis Drake, thereby giving them the desire to find lost treasures. They are orphans who sneak out at night to museums, and they are caught trying to steal the map used by the ill-fated Ferdinand Magellan expedition to sail around the world.  Magellan died somewhere in the Philippine Islands. The surviving 18 crew members hid a rumored enormous amount of gold somewhere in the Islands, or possibly in Barcelona. There’s also a diary containing information about the lost treasure.

Unfortunately, they get caught. Nathan is sent back to the orphanage since he’s a child, but his older brother Sam is arrested and jailed. Sam escapes but promises to return to Nathan someday. When we meet Nathan as an adult, he’s tending bar and engaging in some low-level petty theft. His real aim, however, is to find Sam so they can find the treasure together.

He’s recruited by Sully, who seems to know everything about the treasure map and the brothers’ history, to embark on a risky mission to locate the treasure. Also looking for it is Santiago Moncada who considers it his birthright and feels called to restore the family’s honor.

Filming locations in Spain and Germany give the film a visual boost (I really want to go back to Barcelona!). Aside from exterior shots, there are plenty of old, creepy underground vaults loaded with booby traps. Of course, there must be a cave, and it’s an immense one, hard to get to, and holding a big surprise.

The stunts are quite impressive, especially Holland’s. If you’ve seen the trailer, you’ve seen the airplane stunt which Holland calls the most difficult one he’s ever done. He also provides us with some nifty bartending tricks. He is the main reason to see Uncharted.

If you’d care for an opinion other than mine, I took my 12-year-old grandson with me. He gave the film a thumbs up because, as he said, “it has some really good fighting”.  If you like impossible stunts and “good fighting”, then Uncharted is for you! – Jo Anne Hyde