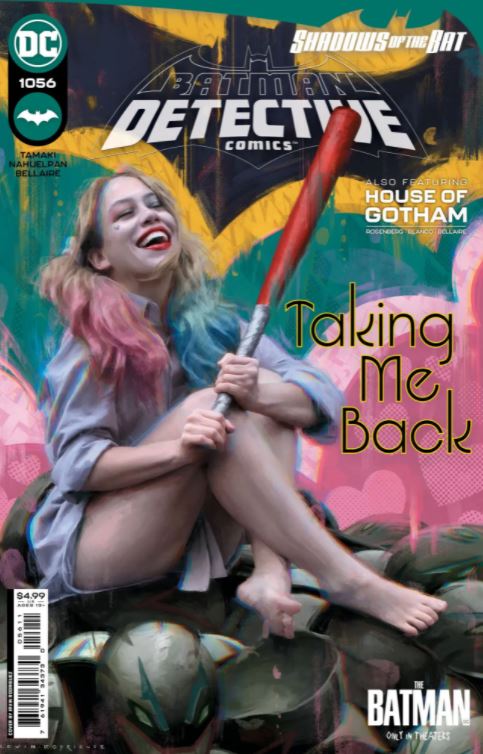 SYNOPSIS: The Scarecrow stalks The Tower! Dr. Jonathan Crane, who recently terrorized Gotham City during “Fear State,” is but one of many villainous inhabitants of Arkham Tower jockeying for position as leader of the hostage situation unfolding before everyone’s eyes. But with security down, Huntress, Nightwing, and Harley Quinn are no longer quite so outnumbered…here come Batwoman, the Batgirls, and Tim Drake to the rescue! Can the Bat-Family save the innocent civilians caught in the crossfire? And that’s not the only help arriving on the scene… The boy kicks his plan into gear in “House of Gotham” part 10! On a mission to kill the source of his trauma, the boy’s aim squares solely on The Joker and the Batman…two sides of the same coin that have, in his mind, caused him and the city nothing but pain. Plus: Batgirl, a villainous run-in, and another step toward disaster for Jim Gordon!

Here we are, the home stretch.  Issue ten of the twelve-part Shadows of the Bat occurs exclusively within Detective Comics.  I’m sure you just picked your jaw up off the floor after Mariko Tamaki dropped Dr. Ware from a skyscraper-like he was Hans Gruber, or was it when Scarecrow made his grand entrance?  Either way, the last issue was a rollercoaster of an issue, so can Tamaki top herself this week?  Oh, you better believe she has!  We also can’t forget the most fantastic backup story of all time, House of Gotham by Mathew Rosenberg.  Gotham’s most unfortunate redhead seems to have made a drastic turn and finally confronts the Batman!

These last two issues Tamaki has zoned in.  Here Tamaki lures the reader in with a softer side.  Using fan-favorite Deb Donovan, we get the inside scoop on Mayor Nakano’s home life from his wife’s POV.  It seems not everyone in Arkham Tower is certifiable.  Some people are trying to get better, but it was all a ruse as we learn.  Tamaki takes the reader on one hell of a ride from that moment on.  Detective Comics #1056 puts the pedal to the metal and never stops.  This issue is one of the great action comic books of the year, and you would never have guessed it from the opening.  This issue is centered around Scarecrow and his hostage Nightwing.  The Scarecrow that Tamaki writes is a true horror villain, methodical, slow, and creepy.  Scarecrow is not in the book a lot, but his presence is as heavy as the key to the Fortress of Solitude.   These few appearances are much better than what we saw from Scarecrow in Fear State.

As in past issues, Tamaki does a magnificent job of utilizing the team and their abilities to fill the Batman void in this story.  We learn that Huntress and Batwoman were not the only undercover operatives in Arkham Tower as the third woman on the inside makes a fashionable entrance, as only she can.  You can feel the tension build with every page turn, from Dr. Meridian’s rescue, another excellent Huntress fight scene to Red Robin’s showdown with the Party Crasher and helping the patients.  It’s all one extensive masterful set up by a writer writing at an elite level.  When you think you have Tamaki figured out, she punches Bat-fans in the gut with one of the best endings to a book in a long time.  I will put the last four pages of this book up against any book on the stands this week; they are that good.

Amancay Nahuelpan once again graces the pages of Detective Comics with his artwork.  While we have been very spoiled readers of Detective, I don’t think I have enjoyed anyone’s artwork this much since Brad Walker’s time on the book.  Nahuelpan aces all the significant action scenes, the fights with Huntress, Red Robin, and the finale are spectacular.   It is how he handles the emotions and body language of Koyuki Nakano.  From her interview with Deb Donovan to her scenes with Psycho-Pirate.  I don’t need any dialogue to know what this character is going through.  These details are what separates Nahuelpan from the rest.  All these artists are so talented, but delivering raw emotion like that is pure brilliance.

Mathew Rosenberg again delivers with chapter ten of House of Gotham.  This part of the story is much different from the previous entries.  In the past chapters, Rosenberg took our unnamed friend through the Gotham City grinder.  This boy, now old enough to grow a beard, is no longer looking to find his way or a way out of the city.  He is trying to do some good in a city that has forgotten so many—taking place during No Man’s Land, arguably the worst crisis that Gotham has faced.  This man has done what only very few in Gotham have and lived to tell about it.   Face-to-face interactions with the worst the city has to offer and those who have sworn to protect it.  Again, proving that he is no fool, he stands up for what he believes is right, even to The Batman.  I, for one, did not see Rosenberg going in this direction.   In a story that has left me pleasantly surprised issue after issue.  I should not be amazed this is the norm for Rosenberg.  Rosenberg has two more issues left.  Does he have two more incredible stories up his sleeves?  I have no reason to think he doesn’t.  Wow!

In a week that features eight titles that fall within the Bat-family of books, it will be hard to top Detective Comics 1056.  In the words of Ryan Lower, “Tamaki is setting up a three-act story.”  Lower is 100% correct, and she has saved the best for act three.  What an issue!  What an ending!  If Batman fans are not pleased with this book this week, I don’t know what you guys want in a comic.  This book has everything you could want and more, heavy on action, emotion, gripping storytelling, twists, and turns.  This comic book is utterly fantastic!  A kick-ass primary story followed by a back worthy of its own title.  The only thing wrong with what is going on in Detective Comics is we have two issues left on this incredible ride.  You need this book on your pull list this week! – Peter Verra