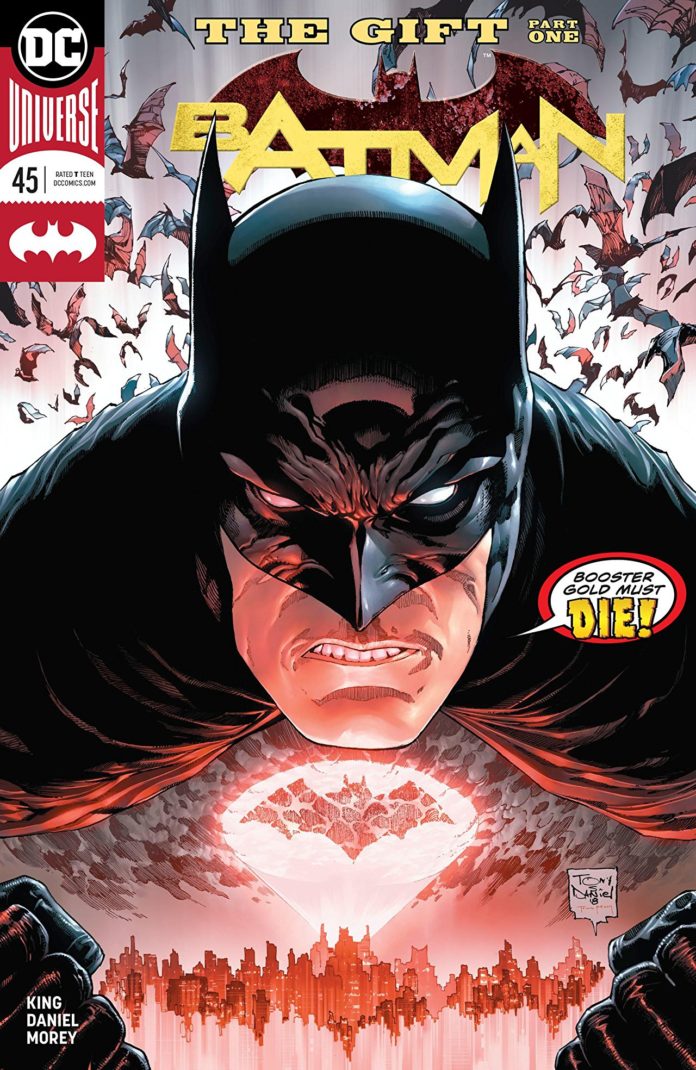 “Is this a kissing book?”

I’ve referenced that quote from THE PRINCESS BRIDE before, for those of you who might not be as much of a pushover for all the Bat/Cat stories we’ve been getting from Tom King as I am. BATMAN #45 takes a break and a detour into an alternate timeline created by Booster Gold, whose attempt at a wedding gift for Bruce Wayne has gone decidedly…awry.

Gotham City is different, and everything is terrible. King effectively and efficiently wields word-weapons like “A” Joker to tell us how bad things have gotten. Tim Drake languishes in a cubicle at a dead-end day job. Duke Thomas is some kind of Frankenstein’s monster being groomed by an unknown hand for some mysterious purpose. Jason Todd sells tires that pack more than a punch. What’s the deal with Batman? Is Bruce dancing with Selina at a fancy soirée? Why is he young and she’s…wait…

As the terrible truth slowly slides into focus, King takes us on a ride that’s essentially his Bat-take on the classic Superman story “For the Man Who Has Everything” by Alan Moore (Booster even references it).

After a memorable and disturbing opening page, most of the issue involves Booster and his robot buddy Skeets zooming around looking for (and later evading) The Batman. After many issues featuring uniquely handsome (and handsomely unique) artwork from Joëlle Jones, Mikel Janín, and Clay Mann, issue #45 returns to more of a classic comic book look with pencils by Tony Daniel (with ink assists by John Livesay), who’s certainly no stranger to Gotham City. This is some of the best work I’ve ever seen from Daniel, who’s still finding ways to make familiar settings look and feel brand new. Colorist Tomeu Morey (who’s added more than his fair share of ROY G BIV to Batman’s town over the years) extracts nuance and adds drama in ways that are absolutely cinematic — look at how Green Lantern and his emerald glow stand out against a Gotham skyline that hums under teal and orange hues that snuck right out of a color-graded Michael Bay Blu-ray, or how a sword-fight looks like it occurs in another part of the world entirely…because it does. This is really a great looking issue, which I say every two weeks, and I love how blessed we’ve been by the artists King’s been paired with.

Your enjoyment of this issue will depend a lot on how much you like Booster Gold, whose banter with (or, more appropriately, at the expense of) Skeets is spot-on. The clipped writing style reminds me of King’s incredible work over on MISTER MIRACLE, and darkness seethes beneath the issue’s quick and quippy exterior. Because, as Booster and Skeets quickly learn, be careful what you wish for when looking for The Batman — because you just might find him. After a red-hot poker of an ending, it’ll be interesting to see where this one goes. – John Bierly