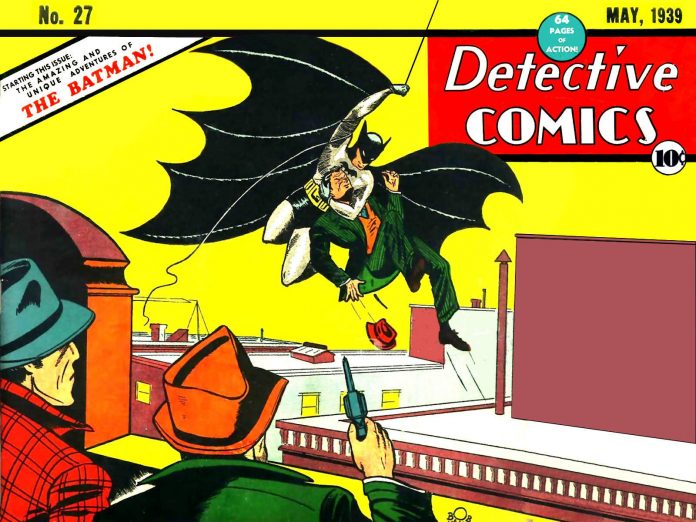 Batman arrived halfway through the final year of 1930s. Created by artist Bob Kane with writer Bill Finger – “The Bat-Man” as he was originally called – was a response to Superman a year earlier. Superman had been a huge hit for the company that would eventually become known as “DC COMICS,” the two kids mentioned above were commissioned to come up with a similar character; another “super hero,” if you will.

One thing led to another, and eventually Mr. Kane and Mr. Finger came up with a character – influenced by Zorro, Dracula, the Scarlet Pimpernel, Sherlock Holmes and probably A LOT of other stuff – that would go on to become one of the greatest comic book superheroes, if not THE greatest, in the history of, well, comic book superheroes.

Below you’ll find a history and timeline of The Batman in the 1930s. Ironically, the Batman we know and love today is VERY MUCH like “The Bat-Man” that was originally conceived by two young kids in New York City and that existed in the pages of DETECTIVE COMICS for the latter part of 1939.

MAY 1939: “The Bat-Man” – as he was originally called – debuts in “The Case of the Chemical Syndicate” in DETECTIVE COMICS #27. Gotham City Police Commissioner James Gordon also appears in the story.

JULY 1939: Batman’s utility belt is highlighted in DETECTIVE COMICS #29. This issue’s story of “The Bat-Man’ also features Doctor Death; considered to be the first recurring Batman supervillain. Also, Batman sports blue/black gloves for the first time after they were previously depicted to be colored purple and then beige.

SEPTEMBER 1939: Julie Madison – Bruce Wayne’s fiancé – makes her first appearance in the story “Batman Versus the Vampire, Part 1” in DETECTIVE COMICS #31. The forerunner of the Batplane – the “Bat-Gyro” – as well as the Batarang, are first introduced. The story concludes in DETECTIVE COMICS #32 with Batman saving Julie Madison and killing the two vampires – The Monk and his partner Dala – by shooting them with silver bullets. This story would be reimagined in the story “The Demon of Gothos Mansion (BATMAN #227 in 1970 and BATMAN AND THE MAD MONK graphic novel by Matt Wagner in 2006).

NOVEMBER 1939: In DETECTIVE COMICS #33’s “The Batman and How He Came to Be,” Batman’s classic origin story is told for the very first time. Readers found out that Bruce Wayne’s parents were murdered in front of his eyes when he was a child. As an adult, he considered a bat flying through a window of Wayne Manor as an omen, thus becoming the crime fighter known as “The Bat-Man”

“Criminals are a superstitious cowardly lot.
So my disguise must be able to strike terror into their hearts.
I must be a creature of the night, black, terrible… a . a… a bat!
That’s it! It’s an omen. I shall become a BAT!”