EDITOR’S NOTE: The following interview took place in Beverly Hills, CA in late June of 2008 during a press event for THE DARK KNIGHT. – Bill “Jett” Ramey

Were you glad to be back for another BATMAN?

GO: Yeah, certainly. I really enjoyed working on the first one. Art aside — and you’ve probably met Chris [Nolan] right? I really like Chris…he doesn’t scream and he doesn’t shout. I’ve never seen him be rude to anyone and he’s really sort of nice guy to be around. And you finish and you can get home for dinner and put the kids to bed. He’s not this lunatic that wants to work 17, 18 hours a day. You know those sort of guys — shouting and screaming at people.

So when they say to me “Come back and do another BATMAN,” it’s an easy decision. Like Chris, he called me up and said, “There’s more to do in this one, and the arc of the character emotionally is bigger,” you know. And it’s nice to work with Christian — you know all those things are great. It’s like a family, really. You get to go back and see people you know and seen before — cast and crew. So when you are considering all of this and spending 10, 12 hours with these people, I could think of a lot of worse people to spend time with than Chris Nolan.

When you first read the script, did you think “Man, there’s a lot for Gordon to do in this one?”

GO: Yeah, yeah. It was a lot…certainly a lot to focus on and what not. I think what Chris has done — in the hands of a less talented director — I think you could watch this and think “This is too much. It’s overloaded. Lots of badguys…there’s The Joker, there’s Lau, there’s the mob, there’s the money — which the Joker doesn’t want (laughs)! There’s all of that going on and when the script, I knew exactly where to focus — where my focus was, you know?

Would you have came back even if the role was smaller?

GO: (smiles) Yeah (laughs)! My returning to it wasn’t dependent on the size of the role — whether it was bigger than the one in BATMAN BEGINS. But — I had quite a bit to do in that first one, you know?

So, would you do it again…in a third film?

GO: I think there is every possibility that there will be a third one, certainly. I do think that there will be a third one, yeah. And I think that Chris will do a third — if Warners wants a third one I think that Chris will do it. I’m pretty much convinced — it’s his baby, you know? He’s not going to give his baby up. I don’t think Warner Bros. — what they are learning now is, with the franchise, is you need a captain. Maybe with HARRY POTTER you can do it differently, but they’ve learned that you just can’t slap “BATMAN” on it and succeed. It just isn’t enough. You’ve got to have someone at the helm. You’ve really got to have someone with a vision for it, and Chris has certainly got that. So I think that they will tempt him (laughs) with all sorts of things and he’ll do it…and it is his baby (laughs).

BOF: Mr. Oldman, when we were in Chicago last year, I asked you about Heath. And you sort of paused, pointed to the big picture of him as The Joker and said, “This kid…what he’s doing is going to blow people away.” Thoughts now about Heath now that you’ve seen the film.

BOF: Yep, you certainly were.

GO: I got a sense of it the very first morning I worked with him. And I thought, “F*** this kid’s a bit good!” He was doing that scene in the cell — you know which one I’m talking about?  So I called a friend out in LA and he asked about Heath and told him that this kid was really tuned in, you know? It’s like a frequency — he’s found a radio station that we can’t hear. He’s just found something — and that happens to actors sometimes. Nicholson in COO COO’S NEST…Al Pacino in DOG DAY AFTERNOON. It’s that sort of work that you look at and say, “That just goes beyond…something happening that’s just special, you know? And he did that with The Joker. It happens like that sometimes — Heath, actors — they just go through a sound barrier.

RELATED: The 10 Most Significant Shots From THE DARK KNIGHT

How was he as a person?

GO: That’s the saddest thing you know. It’s a shame that he can’t sit here with us and talk about The Joker. And I don’t mean this in a distrustful way…like Christian [Bale] is very private. It’s quite intense and private the way he works and the way he deals with Batman — not to say that he doesn’t have a great sense of humor — he does and I adore Christian. But it was more fun hanging out with Heath (laughs)!

Because Heath died, people want a dark story, you know? (Makes a funny face and rolls his eyes) “Oh he was so obsessed with The Joker, and he couldn’t sleep, and blah, blah, blah, blah.” But you know, in between takes, he’d sit on the curb, smoke a cigarette, laugh, and talk about his daughter. I just thought he was a beautiful, beautiful kid. I had the real affection for him. Charismatic — you need a whole new word for Heath.

But it’s pretty special work, huh? And he’s probably going to get an Oscar nomination. And they usually don’t recognize this sort of movie — this genre. (Rolls eyes) “We’re the Academy.” But they probably will with this.

But THE DARK KNIGHT isn’t your average “Action/Comic Book Movie.”

GO: Yeah, it’s pretty dark. I mean really dark, the movie, isn’t it? It’s intense…I was amazed when I saw it! I was really amazed that [Chris] got a PG-13. And The Joker! I think that Heath has given us — The Joker is one of the most disturbing villains that frankly I’ve ever seen. A really bad badguy in a movie.

If you didn’t know it was Heath Ledger, you wouldn’t have know who was playing The Joker. Was it like that on the set?

GO: Yeah, in a way. As an actor, it’s not as if you lose yourself — lose the sense of who you are. It’s like a band in a groove, you know? And you could tell with Heath that he was…that he had just found that “Thing” you know, what musicians call “The Crack.”

JETT: Sir, I loved the ending…that little speech you give.

GO: Really? Well thank you. It is sort of cool in context to how the film is ending isn’t it?

JETT: Oh yeah, that’s the part that moved me the most, so that’s why I had to tell you that. What’s your favorite scene in the film as Gordon?

GO: Oh that’s easy (laughs)! That scene between Gordon and Dent at the beginning when he wants “in,” you know? That nice little back and forth between the two was quite nice and interesting. That’s my favorite. 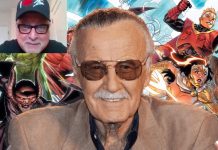