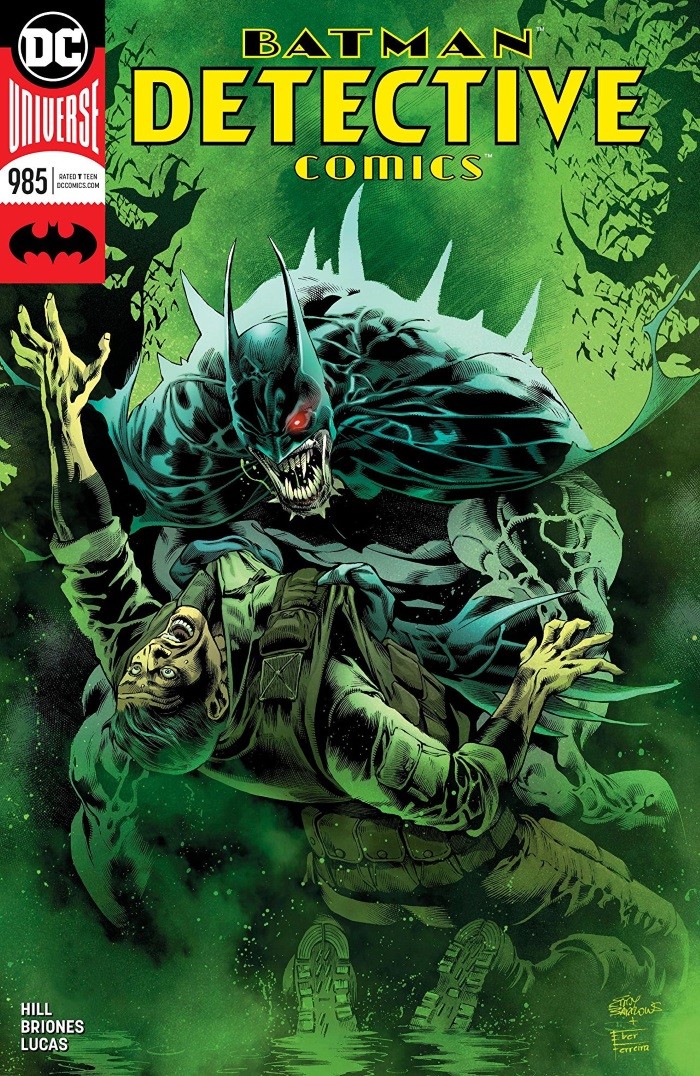 SYNOPSIS: Then, Black Lightning, the Signal and Cassandra Cain are showing how well they work together…but now they’re up against a foe who can tap into their worst emotions and play them like music! When you’ve seen the kinds of horrors these poor souls have, there’s plenty of trauma to work with…and with that, you can turn these heroes into deadly weapons! Meanwhile, Batman’s “side project” has been revealed—what are the Brainiac Files, and what exactly does Batman plan to do with them?

I feel like Bryan Hill has been writing Detective Comics for a lot longer than he has.  He really gets these characters and their motives; not just main characters but the supporting cast as well…it’s damn good writing! Alfred nearly steals this issue and he never even leaves Wayne Manor! Just like the previous two issues, we get just enough backstory and a wonderful tease leading into the next issue.

Right off the bat I get a sense of Hill’s writing capabilities. Whether it was Bruce and Alfred or Jefferson and the team, you feel the emotion, anger, and heart of each character.  As I read the book, I get vibes of scenes from Batman Forever, The Dark Knight and just a sprinkle of Batman Begins/Year One.  The opening scene with Bruce and Alfred reminds me of a better version of Bruce and Dick in the garage in Forever.  A few pages later, newly introduced villain Karma is doing his best to pay homage to the Joker kidnapping Mike Engle in TDK. I love it when a writer will pay tribute to the history of Batman; it shows how these films and books have reached and inspired us all.

Alfred has and always will be the voice of reason in Bruce’s life.  Detective 984 and 985 have been such an amazing interpretation of the character. Alfred’s dry wit and passion are on full display here; it’s hard to pick the best moment in the issue since there are two great ones for him: Bruce/Alfred and Alfred/Jefferson. You can see the pain and feel the love as Alfred speaks: “Master Bruce is a man but he is only a man. He has considerable resources and the will of a titan. But the Batman is an idea that’s powered by frail flesh and blood.”

That quote says it all.

Hill doesn’t stop there; he delivers a vintage rooftop scene between Gordon and Batman. Short and sweet, and entirely too relatable to what is going on in the real world and something that most parents fear.  Not to be lost in this is how Jefferson and the team interact.  Batman wants them to think he is protecting them by taking them out of action when it is more of a sign of encouragement—just brilliant! Bryan Hill is an artist and his words are his brush. These emotional moments in this book are truly extraordinary.

Artist Philippe Briones draws a sleek clean book that gives me vibes of Tony S. Daniel.  Briones really does a great job on this issue.  The flashback scene with Batman/Karma, the school bus, and reporter kidnappings are tremendous and really stand out.  Alfred’s emotions range throughout the story and the facial expressions sell it wonderfully.  The attention to detail throughout the book is something that you can’t help but enjoy; Bruce’s “Knight Rider” scene is too much fun not to love.  The rooftop scene with Gordon really excels on both sides, but it’s just one glorious page in this great Batman issue! Adriano Lucas did a masterful job coloring the book and matching the tone with just the right amount of color or darkness when needed.

From page one, the issue is filled with great moments such as Bruce’s realization, Karma’s origin, the plan, and the execution.  Bryan Hill has crafted one fine Batman tale in three solid issues since taking over the title. Detective has consistently been a must-have for your pull list twice a month and I don’t see that stopping any time soon.  Bryan Hill and his team get Batman and the Bat-Family as good as anyone I have read.  Each issue gets better and better, and is filled with heavy hearts, great dialogue, and a madman on the loose.  Issue 986 goes on sale on 8/8/18 and I do not think I can wait that long! – Pete Verra