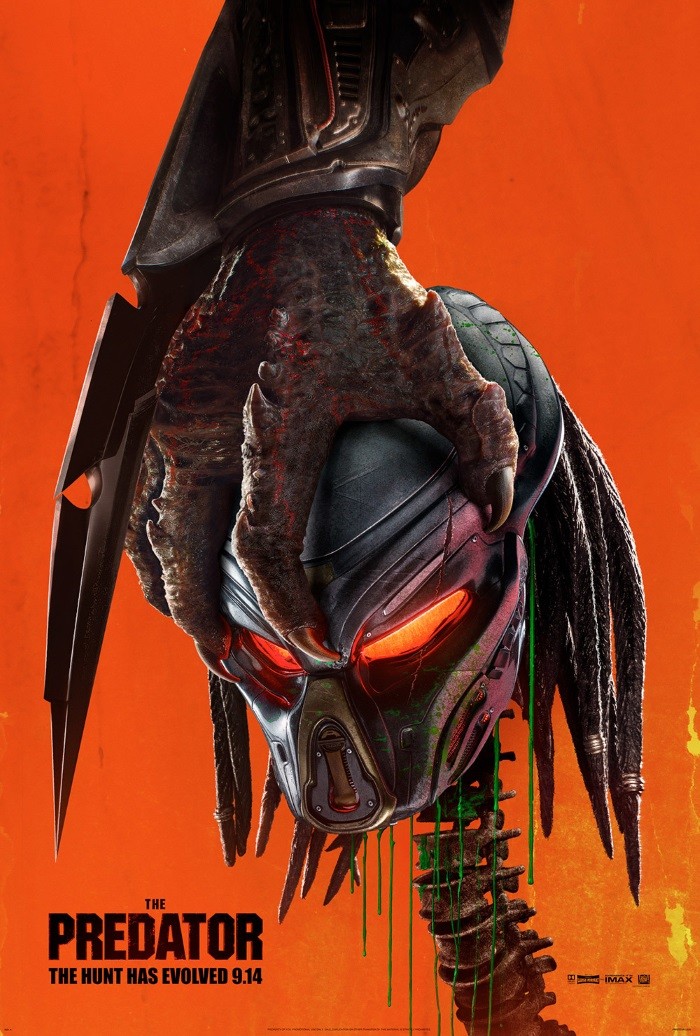 The Predator, directed by Shane Black, marks the 4th incarnation of Predator films. Four films, four different directors, and four different lead actors might suggest that one film was enough.

Perhaps Shane Black, who, as an actor, was part of the body count in the first film, was feeling nostalgic for gruesome-looking, extremely tall, dread-locked extraterrestrial creatures. Maybe it seemed like a good idea at the time. Maybe he wouldn’t have needed a bombastic, overwrought musical score to attempt to create a line of suspense that doesn’t exist in the plot line.

But he lost me when he included my pet peeve – extraterrestrials intelligent enough to get to Earth and menace its residents who communicate by growling.

Monsters and wild animals growl, and the predators have a written language that doesn’t look like it would be expressed through growls. It’s just annoying. Give me a Klingon any day.

Earth’s chief defense against these nightmarish beings whose favorite pastime is tracking, hunting, and killing humans, Quinn McKenna, is played by Boyd Holbrook. After all, it turns out to be his son Rory (Jacob Tremblay) who inadvertently guides the predators to what they seek due to his Asperger’s syndrome, savant, code-breaking intelligence. The elder McKenna, a former Army Ranger who now works as a mercenary, runs afoul of the government when a sniper assignment goes awry due to a crashing spaceship. He doesn’t want to talk about it, but the Feds, led by an agent named Traeger (Sterling K. Brown), want to break him.

Because these extraterrestrials have visited us three times before.

After refusing to cooperate, Quinn finds himself on the short bus to the “loony bin” with six other miscreants who will soon be willing to help him defeat the predator. There are actually two predators – one a rogue who wants to help humans, and the larger, scarier one sent to kill him. The predator is played by Brian Prince who should get some credit for having to wear that bulky costume.

The scruffy detainees include Nebraska Williams (Trevonte Rhodes), Coyle (Keegan-Michael Key), Baxley (Thomas Jane), Lynch (Alfie Allen), and Nettles (Augisto Aquilera). The only real suspense in the narrative is whether or not any of them will survive – if you really care. Added to the mix is a female scientist, Dr. Casey Bracket, played by Olivia Munn, who even though she’s as tough and foul-mouthed as any of the men is still referred to as “the girl.” Quinn has an ex-wife who’s also tough and foul-mouthed – again, if you’re interested.

Speaking of foul-mouthed, one of the main problems for the film is some very lazy screenwriting. If you removed most of the once taboo F-words, you wouldn’t have much dialogue left. The characters use it liberally in all its forms and possible combinations until you just want to grab a bar of soap. I don’t have a problem with the word used from time to time – it can be funny. But used as often as it is here, it’s just tiresome. Shane Black said he wanted an R-rating, which means F-bombs and blood/guts if there’s no sex, but I think he might live to regret that.

In my humble opinion, the audience that would be most interested in this mixed-bag romp would be 13/14 year-old boys. It’s a very junior high kind of thing. Technically, they shouldn’t be able to buy tickets to it, but parents often exercise poor judgment as did the morons who brought small children to this preview screening.

The special effects are mediocre at best. I’ve seen better on network television. Folks already know what the predators look like thanks to the previous films, so there’s no suspense there.

That brings to mind another script weakness. These things have already visited Earth three times before and dispatched a generous number of humans, so why are Agent Traeger and his cronies so intent on secrecy? To echo the triteness of the dialogue, I think that ship’s already sailed!

If you prefer style over substance, The Predator, might be just your ticket, especially if you’re just looking for escapism and a break from the everyday, humdrum routine. – Jo Hyde