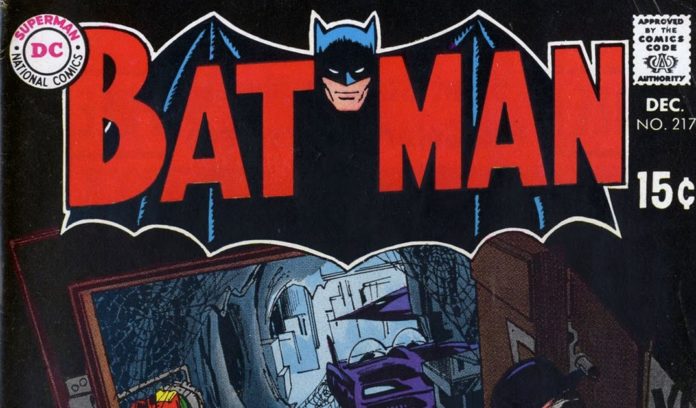 Dick Grayson has graduated high school and is now a “man” (because that’s what it said on his draft registration card).  Thus, Dick packed his bags and took off for college at Hudson University.

For the first time in many (comic book) years, Batman will be without his crime-fighting partner.

Bruce decides that things must change. It is time for The Batman to go back to his beginnings. He tells Alfred that they will move out of Wayne Manor — and The Batcave — and relocate to his penthouse atop of the Wayne Foundation building in downtown Gotham.

Thus, The Batman — the lone, dark, creature of the night — returns.

The historical significance of this issue is much more important than the actual story – “One Bullet Too Many!” – told in this issue.

As a kid, I never was a fan of Bruce living in a downtown Gotham penthouse as opposed to Wayne Manor and operating out of the Batcave. Regardless, this is where that small part of Batman’s history began. A nod to “Penthouse-living Bruce Wayne” can be found in director Chris Nolan’s THE DARK KNIGHT (2008) as Bruce (Christian Bale) and Alfred (Michael Caine) are forced to reside in a downtown Gotham penthouse while Wayne Manor – burned to the ground by Ra’s Al Ghul (Liam Neeson) in BATMAN BEGINS (2005) – while The Batman operates in the “Batbunker” underneath the building.

Another change for Bruce here is that he becomes a victim’s rights advocate by starting a foundation called V.I.P. – “Victims, Inc. Program.” In short, Bruce gives zero-interest loans to crime victims as well as offering them help from The Batman – how goofy is that?! And speaking of goofy, Bruce takes to calling Alfred “Alfie” and “Alf” for no apparent reason. 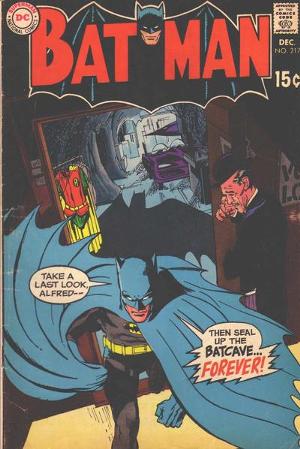 BATMAN #217 marks the end of the Batman and Robin crime-fighting team – well, at least in terms of Robin being Dick Grayson — that began back in April of 1940 in DETECTIVE COMICS #38.

DC and Batman editor Julius Schwartz again decided to make significant changes to the Batman comic book universe — which I quite sure had a lot to do with the success of Marvel Comics’ more “relative” stories.

This issue marks the return of “dark and serious” Batman stories featuring Batman who has returned to his roots as a lone vigilante and creature of the night. Batman’s look was also altered as he begins to be drawn in a more detailed and realistic manner. In fact, the legendary Batman artist Neal Adams — who would soon team up with writer Denny O’Neil on BATMAN — did the cover of BATMAN #217. His artwork is a great example of Batman being presented, aesthetically, more realistic than he had ever been previously in the pages of comic books.

BATMAN #217/”One Bullet Too Many!” was written by Frank Robbins, penciled by Irv Novick, inked by Dick Giordano, and edited by Julius Schwartz with cover artwork by Neal Adams. It cost 15 cents and has a cover date of December 1969.

“One Bullet Too Many!” from BATMAN #217 made Michael Uslan’s list of the most important Batman comic book stories from 1939 to 1979. The story can be found reprinted in various collections and comics, including Showcase Presents: Robin the Boy Wonder, Vol. 1. – Bill “Jett” Ramey