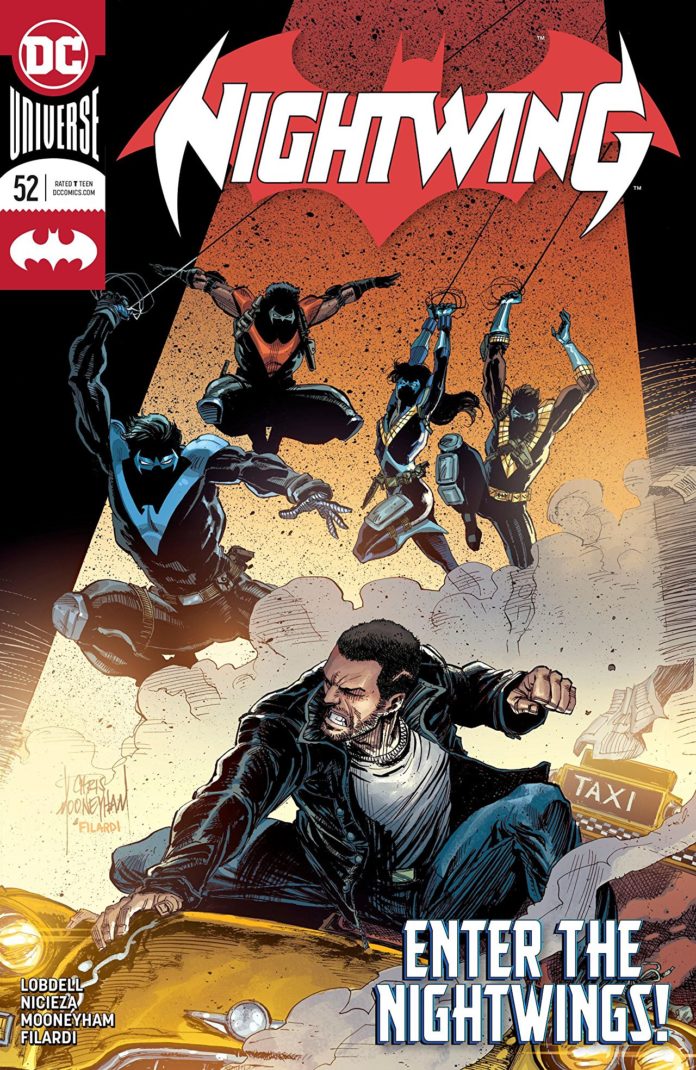 SYNOPSIS: Who is Dick Grayson? That’s the question haunting him after the devastating injury he suffered in Batman #55.

I have to admit it was a nice curveball to have a team take over Nightwing’s mantle instead of just one man.

Four Bludhaven cops have been pushed to the edge as the city takes a nose dive due to budget cuts, warrants suspiciously being harder to approve and Nightwing now missing or dead. So naturally, it’s time to don leftover Nightwing suits and go the gun-toting vigilante route.

The vigilantes/New Nightwings are led by Detective Alphonse Sapienza, who motivates his fellow officers by saying, “Who wants to do some good?” A line I hope is a callback to Elliot Ness in “The Untouchables.”

Meanwhile, Detective Svoboda investigates a murder that may have metahuman elements and things escalate in one of the creepiest pages I’ve seen in a while. Major hat tip to artist Chris Mooneyham.

After the last issue, there was some flak about Dick Grayson going by “Ric Grayson” instead. To be honest I wasn’t too bothered by the name change, if only because he had already gone by several names after losing most of his memories.

I’m enjoying Grayson’s no f—s are given phase, which to me picks up on a few plot threads from Nightwing stories post-REBIRTH.

Previously Raptor, Grayson’s ally-turned-opponent, wanted to convince Grayson that being adopted by Bruce Wayne corrupted his sensibilities. We now have a Grayson who does not remember his life after the circus, in a sense giving us a sample of who he would have been without Wayne’s influence.

Seeing the listless Ric identity firmly answers Raptor’s question and shows us that Grayson would be worse off without Wayne’s guidance.

I also wouldn’t be surprised if Ric emerged due to some advice Grayson got at the end of “The Untouchable” storyline (issues #35-43). While doing a post-mortem on his shortcomings against the Judge, Grayson is told that “You can’t beat yourself up for things that are outta your hands.”

Having stuck his neck out for others and forgiven friends for the occasional betrayal, it is logical for Grayson to retreat to a more selfish personality after being shot in the head.

So, in the final analysis, this Ric side of Grayson is temporary, as most major comic book changes are, but it is in keeping with the character’s path post-REBIRTH. Every now and then a hero has to fall to learn to pick himself up again.

Thank you, Michael Caine, for inspiring that last quote.

In the meantime, now I can’t wait to see what the Scarecrow is up to! – James Armstrong