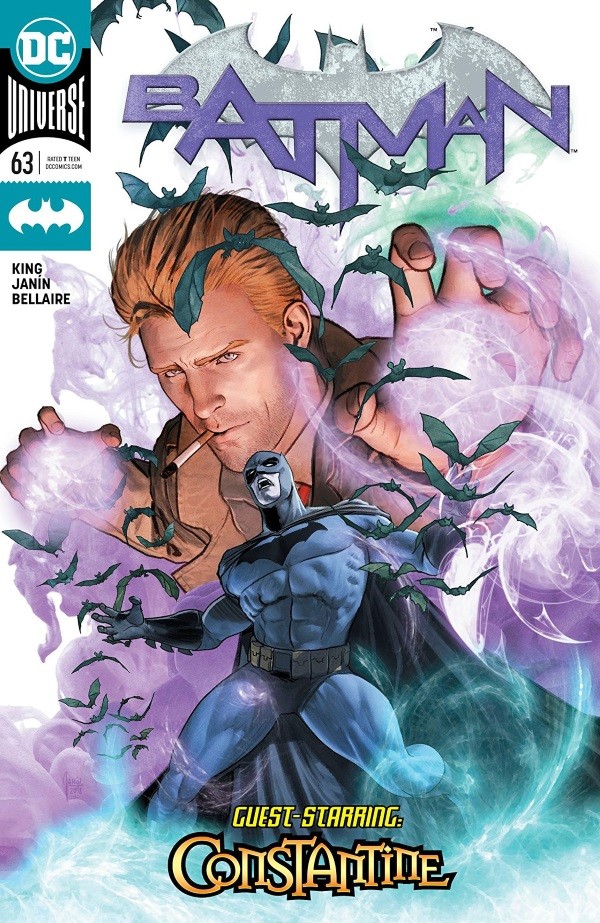 SYNOPSIS: There are strange goings-on in the dark alleys of Gotham City, mysteries that will require a different skill set than the Caped Crusader’s if he’s going to stop the whole city from succumbing to the darkness. John Constantine, the Hellblazer, is a person with just those skills—but after the events of “The Witching Hour,” is Constantine in any condition to help The Dark Knight Detective?

The next time you find yourself a contestant on JEOPARDY!, and the clue is “‘Who, What, When, Where, Why, and How’ are the basic tenets of THIS profession,” don’t be too quick to buzz in with “What is Journalism, Alex?”

Because the correct response might also be, “What is writing BATMAN when your name is Tom King, and these are the questions you want your audience to be asking at least every other, if not every, panel?”

As long as our writer himself knows those answers, we’re in good hands. And I trust that he does (even when he frustrates me, which I realize and appreciate is his job and applaud him for).

Bruce Wayne, however, probably isn’t having as much fun with all of this Mr. King and we readers are.

Before we dig into #63, let’s jump back to #60, which is the last time (maybe) Bruce Wayne (and we) knew for certain where he actually was (probably). Batman returned to The Batcave where he and Alfred had been keeping Oswald Cobblepot in forced protective custody (with tea and sardines, at least) after Cobblepot ratted out Bane (who’s playing one hell of a long-game against Batman from the bowels of Arkham Asylum) to find The Penguin POOF! and Alfred prone.

Did Batman even see Alfred’s assailant looming behind him? We did. And it looked an awfully lot (as in, exactly like) Bane’s silent sentinel and chief lieutenant who’s been standing around since the reveal of Bane’s little basement bureaucracy in issue #50:

Issue #61 found Jim Gordon and young Master Bruce assisted by the one man who could help bring the boy’s parents’ killer to justice: The Batman.

But that doesn’t make any sense.

And then, in #62, Batman was suddenly hanging upside down in a decidedly surreal slaughterhouse while Professor Pyg prepared to chop him into chitlins. But was he really in a pork-packing plant? And was that really Professor Pyg?

Until she does. Right down to the “I do” and the subsequent honeymoon.

But it’s sweet while it lasts.

It’s no secret that Batman’s guide through this dreamy blast of wedded bliss is John Constantine, as DC’s resident Hellblazer appears on the cover. But is it really Constantine, who’s trying to warn Batman that this none of this is real? Is Batman creating the image of Constantine to put a face on the magical mystery he surely knows he’s involved in? Or is “Constantine” yet another red herring conjured by whoever is actually orchestrating this weirdness, as “Constantine” himself explicitly states (and even goes as far as naming names)?

Mikel Janín (art) and this book’s secret weapon Jordie Bellaire (colors) join King to pick up from where they left off in #50, and the journey they send Bruce and Selina on is everything many of us hopeless romantics were envisioning when we thought that the most shocking outcome of the wedding was that King would actually go through with it. But, since this arc is called “Knightmares,” the good times don’t last for long. (“You were happy… and the world wasn’t.”) At least the artwork does, in ever handsome, gorgeous, glorious panel.

When things go wrong, is Batman seeing a possible future? An inevitable outcome? What his own fears are telling him will happen, or what his tormentors need him to believe to break him?

Again, I have no idea. But Tom King does, and watching all of this unfold is fascinating and engaging and deliciously unpredictable.

I can’t even begin to guess what’s coming next, and I love that. I think you will, too. – John Bierly