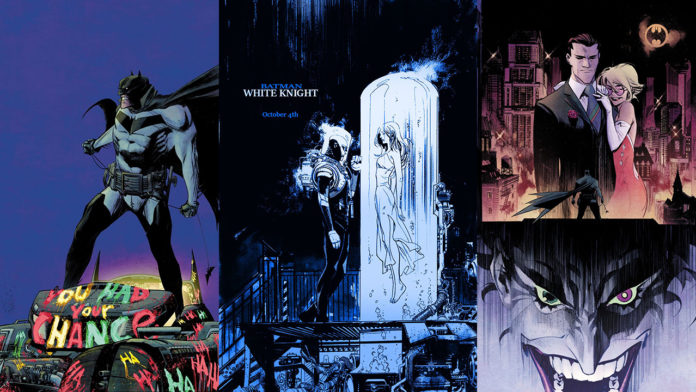 If you’re a regular reader of BATMAN ON FILM, you know that we’ve been praising the heck out of writer/artist Sean Murphy’s BATMAN: WHITE KNIGHT 8-issue miniseries.  I’ll make a prediction: Once its run is over, it’ll go down as an absolutely classic Batman story.

If you’re not reading (and you should be), here’s the premise: The Joker — AKA Jack Napier (yes, it’s a nod to BATMAN ’89) has been “reformed” and tries to convince Gotham that it’s Batman, not The Joker (and the other supervillains of Gotham), that is the true cause of the city’s crime problem.  4-issues in, it looks that ALL of the city has bought in to Napier’s claim and has turned their back on The Dark Knight.

Via his Twitter page, Murphy answered a few questions about WHITE KNIGHT...

2) How much did DC interfere with White Knight? Hardly none–I essentially have full creative control. I only had to edit for swearing and nudity.

Murphy’s original plan was to include nudity and bad words. Even with most of that edited out, WHITE KNIGHT isn’t something you’d want an 8 year old to read.

7) There’s a lot jammed into BWK and it seems overwhelming–why?
I assumed this would be my only chance to do a Batman book alone, so I wanted to fit as much in as I could. It meant shortening certain details while letting others breath. Keeping it under 24 pages was tough.

Interesting answer to this question. However, I don’t get a “overwhelming” feeling reading this story. It’s fine to me.

Yes! Here’s hoping this happens — I’d love to return to this Batman world!

For the entire Q&A, check out Sean Murphy’s Twitter page.  And check out BOF for our reviews of BATMAN: WHITE KNIGHT by Ryan Lower. – Bill “Jett” Ramey