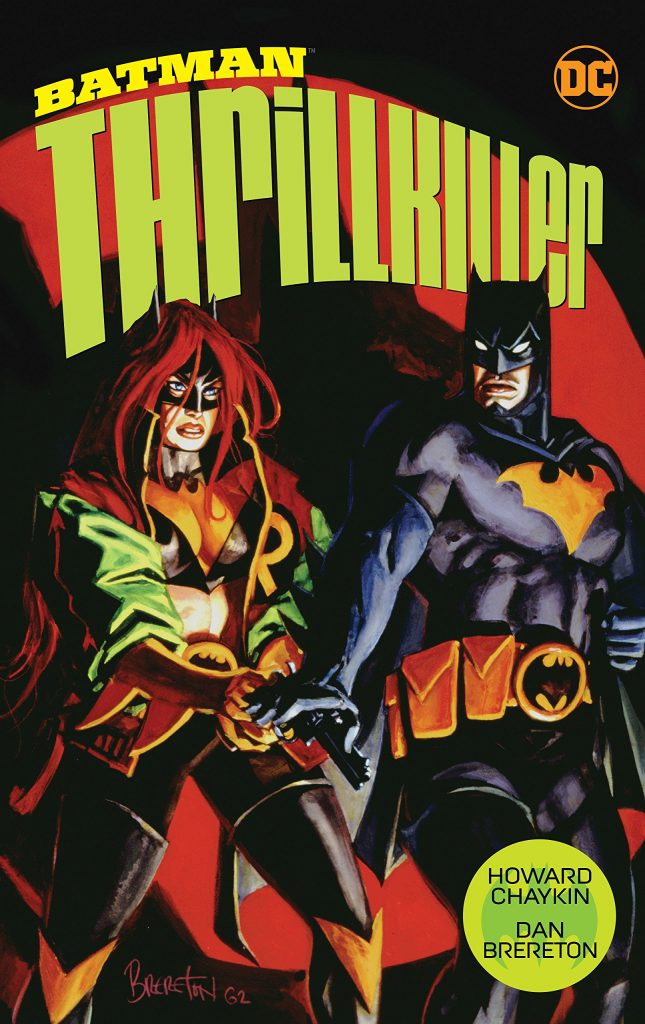 The year is 1961. A time of transition between the Fifties–the decade of Ike, McCarthyism and Jake Kerouac–and the dawn of the Sexual Revolution, the Vietnam War and turning on, tuning in and dropping out.

Like the rest of the USA, Gotham City is filled with giddy optimism. And no one could know that the dark days lay ahead–especially her two masked defenders Batgirl and Robin.

For them, the joyride was about to end … and the last stop was death!

We’re here today to discuss Batman: Thrillkiller, a rip-roaring, noir Batman story that is truly one of a kind.   I will keep this review as spoiler-free as possible as there are a lot of fun surprises and fascinating “Elseworlds-y” type of content that the creators throw into the mix that I don’t want to ruin for you.  Here we go!

“The calendar reads 1961 – but it’s a time of transition… Like the rest of the USA, Gotham was jumping with giddy optimism – no one could guess at the dark days that lay ahead.”

Thrillkiller opens with a shakedown – a dirty cop, Detective Duell (Thrillkiller’s version of Two-Face) and two of his cronies drop in a bar and demand their monthly take.  Their plans sour when Batgirl and Robin make an entrance and stop the attempted extortion.  They bash some skulls and escape into the night.

Jim Gordon has had a lot on his plate recently – not only is he having to confront corruption within the GCPD, he is now forced to deal with a couple of vigilantes who seem to be exclusively targeting rogue police behavior on the streets.  Fortunately, he has Detective First Bruce Wayne on his side – a loyal cop who discovered at a young age how dark Gotham can be when he was left penniless after his mother and father were murdered by their former servants.

Jim assigns Bruce to the case of the two vigilantes, and Bruce begins to piece together who these masked troublemakers are.  Though he knows that Barbara Gordon is Jim’s daughter, he doesn’t yet know about her nocturnal habits…and there’s even more to Babs than meets the eye.

At the age of twelve, Barbara discovered her mother murdered and inherited her mother’s wealth.  Jim had been divorced from her for eight years at the time, so Barbara became the sole heiress.  Barbara used her wealth to purchase Wayne Manor — Bruce had to sell it to cover debts his father had incurred.  Batgirl and Robin, romantically intertwined, use its subterranean cellars as a base of operations for their crime fighting.  Robin – a.k.a. Dick Grayson – a.k.a. Richart Graustark (former acrobat for the Glorious Graustarks), loves Batgirl fiercely but is leery of the way Barbara looks at Bruce when they are together.  Could she be hiding feelings for the detective?

Batman: Thrillkiller finds these three heroes fighting corruption in their own unique ways that will leave each in a lethal predicament –- because the people behind these unscrupulous acts are higher than the police department, and they’ve begun to rub shoulders with a woman called Blanca Steeplechase, the White Queen of Gotham City: a villainous yet voluptuous female with white skin, green hair, red lips, and fingernails painted with toxic lacquer…

Writer Howard Chaykin offers up a wonderfully-written, pulpy Batman book with Thrillkiller.  His Elseworlds take on these characters is strong, and he makes powerful decisions with the characters that lead to chilling transformations in the latter pages (Batgirl’s arc is heartbreakingly sublime).  This is a detective-driven story, and the spot-on noir style (not to mention the setting of the 1960s) only accentuates the genre.

But let’s talk about the real showstopper here – the gorgeous artwork by Dan Brereton.  This is one of the most handsomely illustrated volumes you are likely to find.  Each panel is painted-perfection.  The characters, the costumes, the colors… I would be happy to flip through this book just to gaze lovingly at each of them, perfectly content.  I hope they do an oversized version of this book at some point in the future because it will be on my shelf.

Bottom line: you ain’t never seen a Batman book that looks like this.

Batman: Thrillkiller is a fantastic noir-style story filled with hardboiled detectives, sultry dames, and corrosive criminals.  This one belongs in your collection.  The trade paperback had been out of print for a few years, but DC out it back into publication last year; and at right around twelve bucks on Amazon, you can indulge in this fantastic Elseworlds tale at a great price. – John Funderburg