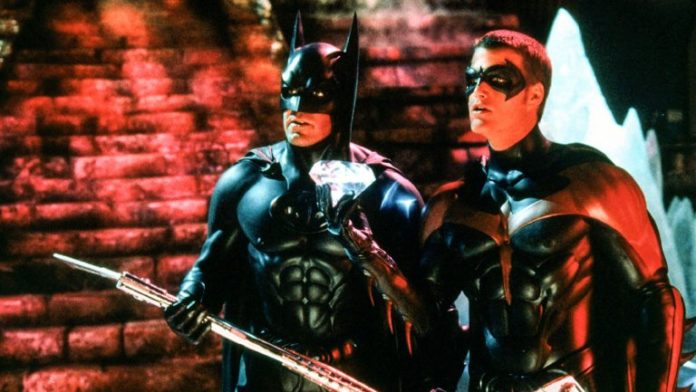 On the other hand, it can be a bad thing to play Batman.

In fact, Mr. Clooney told Mr. Affleck not to take the role of Batman!

“I actually did talk to [Affleck] about it. I said, ‘Don’t do it.’” Clooney told THE HOLLYWOOD REPORTER.  “He did great, though,” Clooney added.

[Arnold] Schwarzenegger was paid, I think, $25 million for that, which was like 20 times more than I was paid for it, and, you know, we never even worked together! We worked together one day. But I took all the heat.  Now, fair deal; I was playing Batman and I wasn’t good in it, and it wasn’t a good film, but what I learned from that failure was, I had to rethink how I was working. Because now I wasn’t just an actor getting a role, I was being held responsible for the film itself.

While the depiction of Batman in B&R is, well, not good, I’d argue that it really wasn’t Clooney who took all the heat as director Joel Schumacher received quite a bit himself — if not even more than GC.

As far as Affleck’s turn as The Caped Crusader, well, we know how that turned out.

While Affleck gave a very fine performance in BATMAN v SUPERMAN, the characterization of Batman was off-putting and divisive amongst fans.

In JUSTICE LEAGUE, he provided a mailed-in acting job in a film that no one cared about enough to, well, care.

And for the sake of time, I won’t even get into the whole drama/nonsense surrounding Affleck and THE BATMAN solo movie he was supposed to write, direct, and star in, so I won’t…maybe.

Here’s hoping that the next Batman actor — which Warner Bros. and director Matt Reeves is currently in search of the next Batman on film (thanks to Affleck stepping down/being invited to leave as writer, director, and star…I said maybe, OK?) — has a run like Keaton, Bale, and West and not Clooney and Affleck.

He was a more than fine Batman in a film that was accepted very well by audiences and was a big box hit.  The video below kinda says it all, no? – Bill “Jett” Ramey