SYNOPSIS: Blüdhaven is burning! Ric Grayson and the Nightwings are helpless against the rampage of Burnback. Will they be able to pull themselves together as a team in order to prevent Blüdhaven from becoming ash? Confronted with their most dire threat yet, Ric and the Nightwings must find a way to come together if lives are to be saved. 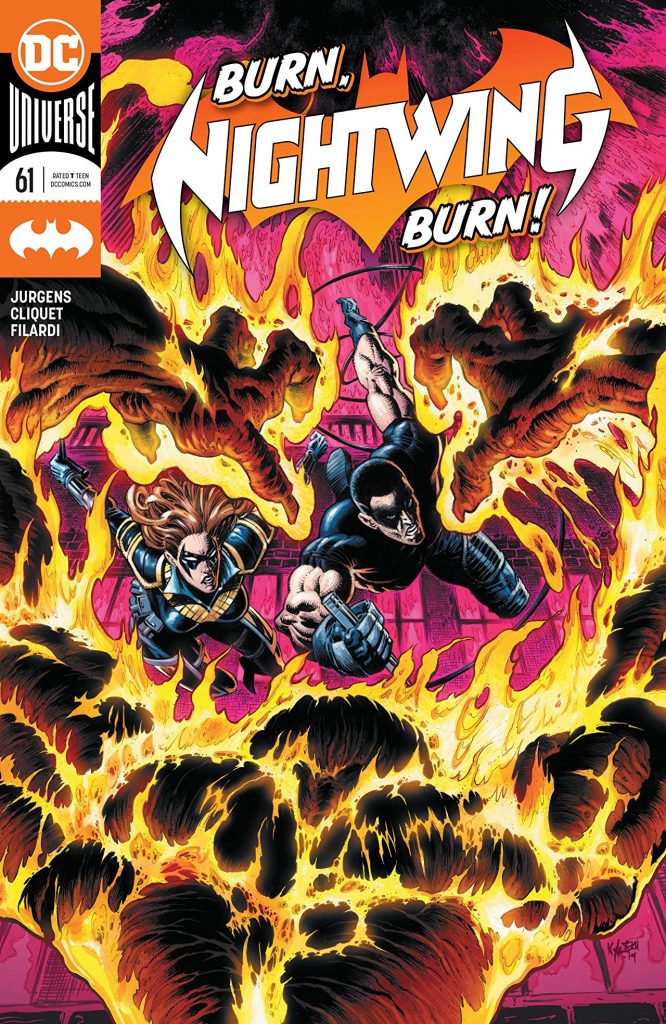 The “City Ablaze” story concludes in NIGHTWING #61 and once again this series didn’t quite stick the landing.

The “Harm’s Way” story under Benjamin Percy showed promise as a crazy, cyberpunk adventure but was cut short due to Nightwing taking a bullet in BATMAN #55. Likewise, “Knight Terrors” kept me interested with the now renamed Ric Grayson being a lazy squatter seemingly out of the hero game. However, his turnaround against the Scarecrow didn’t have, for lack of a better word, any real oomph.

I get more spoilery than normal in this review but if you’re okay with that read on.

In NIGHTWING #61  Grayson and Colleen Edwards, codename Nightwing Gold, are confronting a massive, fiery creature that has cornered Melissa Stapleton, daughter of a comatose police captain. Acting on a hunch, or more accurately one line of dialogue, the Nightwings suspected her of being behind a recent string of arson attacks against police stations.

Our fiery new villain, nicknamed Backburn, felt inconsistent. It has been setting fires at police stations across Bludhaven but in the end, the creature just wants to rest. It’s hard to balance Backburn’s motivation to carry out aggressive behavior and then reveal that all it wants is to be put down.

Maybe instead of police stations, Backburn’s arson attacks should have been random acts. Then the Nightwings realize that Melissa Stapleton was nearby each crime scene. That way, there’s more than just a hunch to tie her to the case and Backburn’s reason for following her wraps up better.

If it seems as if I’m too hard on this storyline it’s only because post-Rebirth Nightwing stories featuring Raptor, Blockbuster, and Guppy all seemed to conclude so well.

But, at a minimum, if someone were to stumble upon this issue it’ll reinforce their knowledge of stop, drop and roll. Although, if you’re going to use a fire extinguisher aim for the base of the flame. That may not apply to fire monsters, though …

I’ve been mildly miffed with the NIGHTWING series rotating between different artists. This time I have to say it worked for the better. The art was done by Ronan Cliquet and, to me, had shades of KNIGHTFALL, which I very much appreciated. The cover was done by Kyle Hotz (isn’t it swell that someone with the last name Hotz got to draw a fiery cover) and is equally beautiful.

Finally, this issue had the “My name is Ric Grayson” intro at the beginning. I understand that Grayson’s name change still needs to be promoted and that every comic should treat the reader like it’s their first comic. But it still sounds like the intro to a CW show and that just bugs me.

“City Ablaze” didn’t quite click with me but the beautiful art made it worthwhile. – James Armstrong