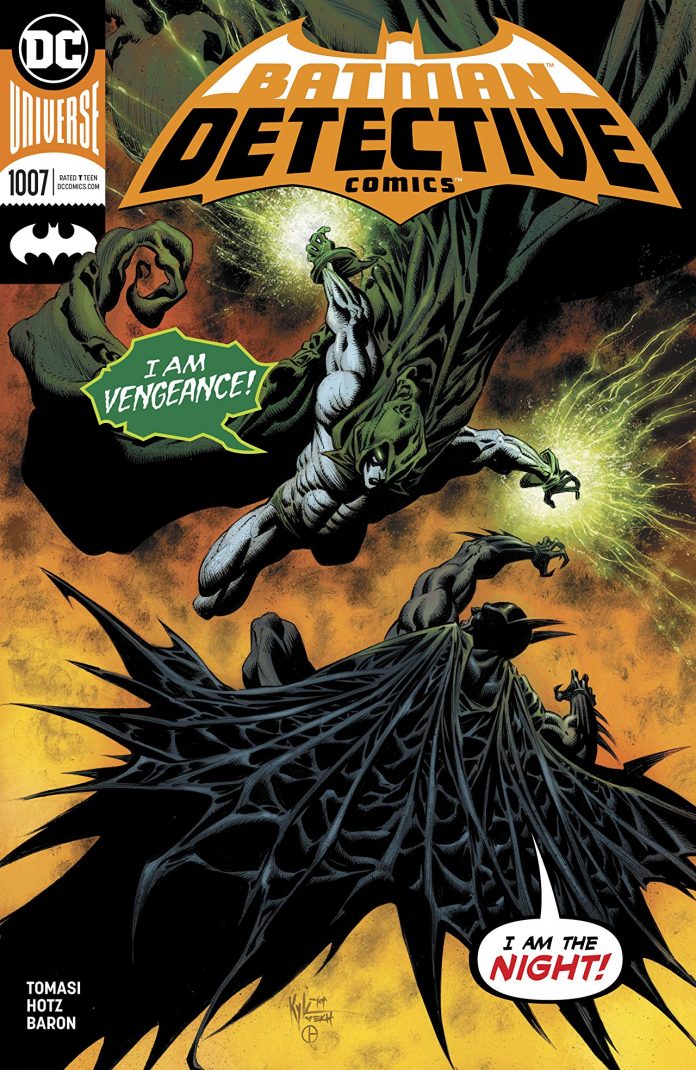 SYNOPSIS: “The Spectre: Dead on Arrival” finale! In all of Gotham City, there’s only one life Batman would be willing to risk to save Jim Corrigan and the Spectre: his own!

Detective Comics #1007 is a dark and grim detective story focused on a pairing of two unlikely characters.  Vengeance vs. justice is an argument that won’t ever be settled between Batman and The Spectre but it will always create an interesting dynamic when they cross paths.  At its heart ‘Tec 1K7 is a part NYPD Blue sprinkled in with some Ghost, creating one of the more enjoyable supernatural Bat stories.

Tomasi’s knowledge of the DCU is so pivotal in an issue like this.  I’ve praised how Tomasi has previously written Batman but here this partnership with Spectre was something special.  The banter between both sides was tremendous. You have the stern dark Batman who bends but won’t break and the immobile boulder that is The Spectre. You can sense that both sides don’t normally budge for anyone. Their conversation on blood and death was so spot-on for both. At times it is like Tomasi is in their heads.

We all love seeing the World’s Greatest Detective do his due diligence, but doing it with Spectre by his side was something I never thought I would enjoy. Seeing Batman in the cave working on the Batcomputer doing analysis is one thing but him using Spectre to his advance is a great Batman move. Using the smoke for dramatic effect, popping in and out of danger, using the illusions to intimidate all well played by the Batman.

Artist Kyle Hotz did a fantastic job with the artwork this issue. The smoke and illusions of the Spectre were scary, nerve-wracking and godly. The horizontal pages were so detailed and I never once complained about turning. My favorite panel, Batman and Spectre outside this old run-down church, capes flowing, tombstones all around, it really is stunning. I was really into Hotz artwork with the hand-to-hand combat. The fight scene with the cult was magnificent. From the grand entrance to the fisticuffs ending with a great panel of Batman throwing a Batarang. Hotz has so many great panels of Batman in this book. If you are a digital screen grabber you will go to town this issue.

Tomasi crafts a short and sweet adventure that has just the right amount of supernatural and the right amount of mystery. Batman and Spectre really play well off one and other. We get a fantastic introduction to the Spectre and his backstory. Kyle Hotz draws a spooky issue with some of the best action panels I’ve seen in a long time.

While I enjoyed this odd-couple story I can’t help but get beyond excited for the tease at the bottom the last page.  I’m not going to spoil it for you here but I will say this. It looks like Tomasi is going classic after all. – Peter Verra