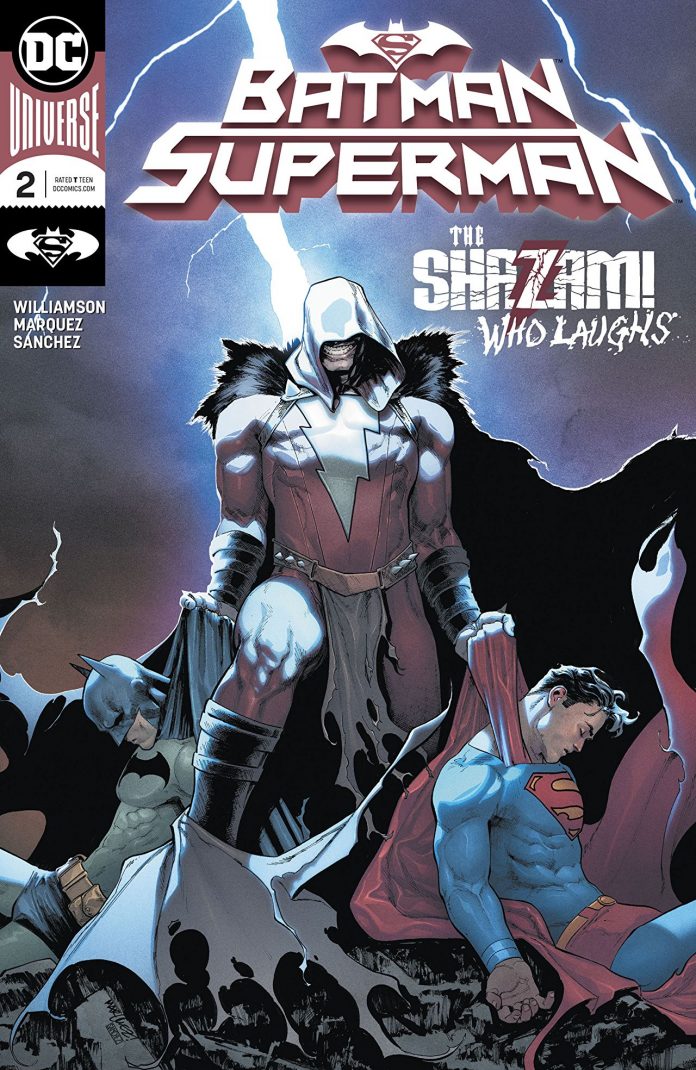 SYNOPSIS: The Batman Who Laughs’ plot is bigger than either the Caped Crusader or the Man of Steel realized. Following a showdown with the devious killer’s first sentinel, a jacked-up, Dark Multiverse-infected Shazam!, the pair has to figure out who else has been targeted for similar transformations. Their first two guesses: someone very close to Batman and the one hero that would make failure nearly impossible-Superman himself!

In fact, between this and Justice League, I’d say the team-up books are out playing these characters’ solo series for the time being.

Yes, I know you like Tom King. No, that doesn’t matter to me.

What Batman/Superman as a title really gets right is the dynamic between its star characters. Bruce and Clark shine as a team here, with their difference highlighted but not magnified. It’s an easy “in” for many writers to overplay the difference between the two when they team up, but we’re talking about Batman and Superman, two characters that have been working together for decades and Joshua Williamson is excelling in presenting that partnership as the main dish, with their moments of conflict serving as well placed garnishes.

The issue opens with the battle introduced at the conclusion of the previous issue. Billy Batson/Shazam has been infected by The Batman Who Laughs and turned into a ghastly version of himself. The action and artwork are jaw-dropping — full of fluid motion and kinetic energy that bursts off the page. I spoke about how well the character designs on this book are handled in my review of issue #1, and those are on display yet again.

David Marquez is quickly becoming one of my favorite artists working at DC currently. Everything from anatomical proportions to facial expressions to backgrounds are exceedingly well done. One of the elements that sticks out the most is his panel work with large panels employed to showcase action and smaller ones providing detail and character work. The books splash pages are fit for framing and the scenes depicting conversation are just as beautiful.

The only criticisms I have for this issue deal with Billy Batson and a major story element that is introduced in issue #1 and only hinted at in issue #2. For Billy, Williamson fails to find an authentic teenage voice through most of his appearance. We get “dude,” “son,” “bud,” and assorted censored curse words that feel forced and odd. It’s a minor complaint and a misstep that many writers have taken.

The “Secret Six” was introduced in the previous issue and seemed to be a major theme of this storyline, but in issue #2 it went unmentioned. There is talk about 6 poisoned Nth Metal Batarangs designed for particular targets, but it’s something many readers may miss and a thread that should have been more clearly connected.

The issue ends with one of the coolest undercover missions in recent Superman memory and I can’t wait for issue #3. – Garett Grev