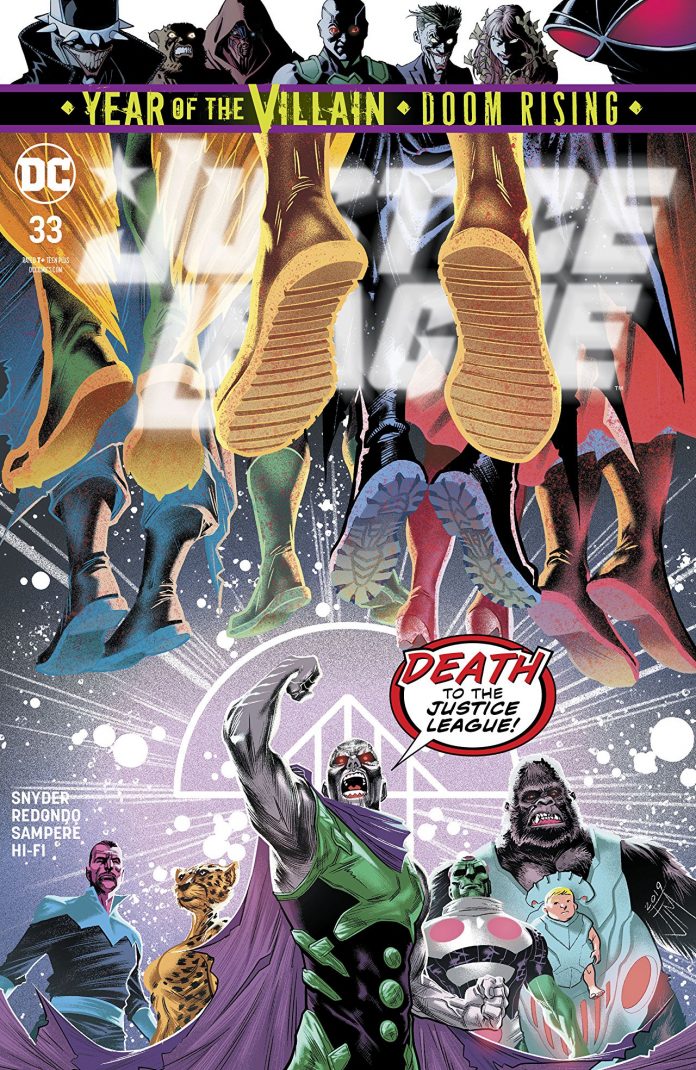 SYNOPSIS: “The Justice Doom War” part four! Apex Lex Luthor is in ascendance, and he’s taking out the remaining members of the Justice League in the present just as his Legion of Doom is beating down the time-traveling heroes in both the past and the future. Batman, Superman and the rest of our heroes may have just figured out how Kamandi’s timeline works when terrible Hypertime quakes rattle their existence, threatening to strand them far from their own time. Meanwhile, the Flash, Green Lantern and the Justice Society take another leap through time, heading for…ancient Atlantis?

I was beginning to worry that we had seen the best of Scott Snyder and James Tynion IV’s epic run on Justice League. Things hadn’t gotten “bad” necessarily, but some of the extra special sparkle that this book had going was starting to lose its shine.

That all turned around with Justice League #33.

One of the main complaints I’ve had in the past 2-3 issues has been in the stories’ pacing. Some segments were all-out exciting and fun, others dragged and didn’t move the story forward, and oddly placed and crafted narration/monologues stood out badly and halted forward progress. I’m happy to report that this issue suffers from none of that.

Tynion has become a challenging writer for me. It’s clear that he has talent and great ideas (especially when working with Snyder), but too often he loses grasp of the concept in its execution. The dude loves words — LOVES THEM. But they don’t always love him back or aren’t as lovely to the reader at least.

In JL #33, I can still pick out the segments that seem to have been written by Tynion, but they play into his strong suit quite well. The story opens with Shayne desperately reaching out into the darkness, straining to find a trace of his father the Martian Manhunter. Shayne is a child acting on nearly his last hope, begging his presumed-dead father to answer him. The writing is moving, eloquent, and a bit long-winded as so many last resort prayers tend to be. It’s heart wrenching and lovely.

Later in the story, in the midst of a confrontation between the Monitor, Anti-Monitor, and World Forger, the brothers deliver their plan of attack against their mother Perpetua. You can feel Snyder at play here, pulling the plot threads he’s woven together in order to show the reader just how Star Man, the Brothers Three, and Hawkgirl with all their energies fit together to wage war against the destruction of the Multiverse. I believe its Tynion at work here again through the combined speech delivered by Perpetua’s children, culminating in a team-up that needs to be experienced first hand.

The future storyline that was such a disappointment in issue #32 also finds much more success in this issue, providing an exciting action scene between the present and future Justice League taking on a Braniac beyond anything we’ve previously experienced. Tynion shines again and Komandi finally has something to do through a recruitment speech to a jaw-dropping team that I won’t spoil here either.

The artwork on this issue is also strong. Other reviews enjoyed Howard Porter’s work on the previous issue more than I did, but I’ll maintain that the stylized approach was distracting to the story and felt out of place. Here, the combined efforts of Bruno Redondo and Daniel Sampere fit the story well, with minimal distractions accompanying the transitions between the two. There are some somewhat odd choices made with shading, but overall the work is sharp and dynamic. Hi-Fi’s colors remain rich and bold while providing a sci-fi coolness where needed through pallet choice.

Overall, I couldn’t be happier with this issue. The slight missteps have found their footing in an action and intrigued packed issue that drives the narrative forward and excites the reader. – Garret Grev

Review – BATMAN: PRELUDE TO A WEDDING: NIGHTWING VS. HUSH #1