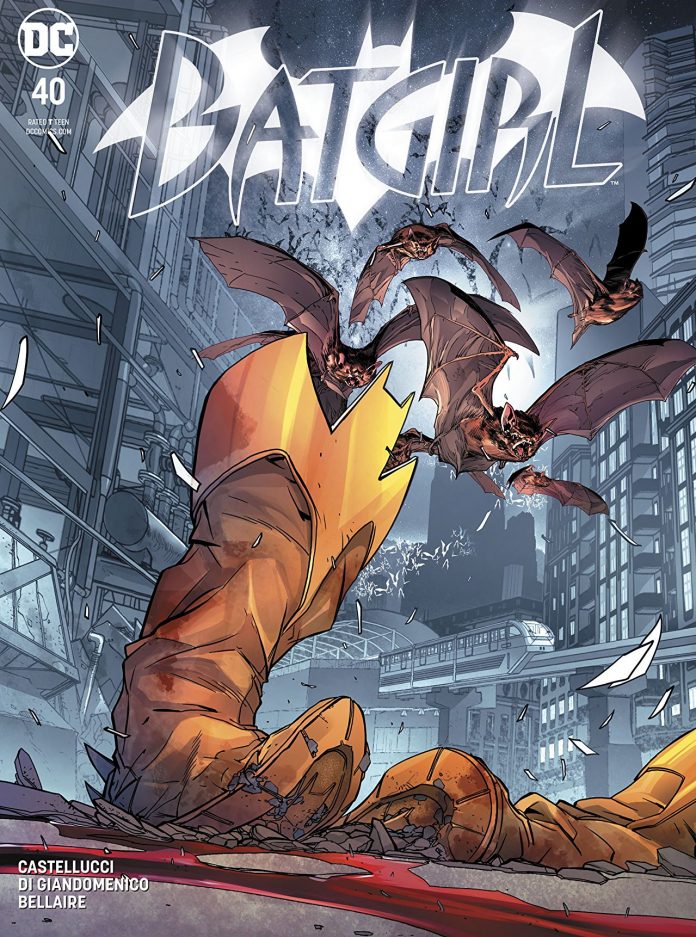 SYNOPSIS: Oracle makes her move to confront the creator who abandoned her…Batgirl! But first she must get our hero’s attention, and she’s got her sights set on Burnside. With the help of her new minions, the Terrible Trio, Oracle’s plans for revenge could mean the end for this hip Gotham neighborhood!

Well, things are starting to come together in this story arc, but unfortunately, it’s not really clicking for me.

It’s like things are happening, but not much really happens. I was looking forward to a ramp-up in action after the last issue, and I guess I got it? I mean, there’s a lot of fire around. Batgirl is in costume for pretty much the whole thing. That’s a plus, right? I think my issue with, um, this issue…is that there’s a lot of dialogue and visual information stuffed into each page, and it drags out the story and makes for a slow read.

Breaking down the plot in broad strokes: Batgirl surveys the damage, Oracle puts citizens in peril in order to attract Batgirl, Frankie activates Babs’s old Oracle program back in her apartment and unwittingly draws the attention of the new Oracle, and Batgirl finally comes face to face with this new manifestation of her program.

Early on, Batgirl stops to coordinate with the police about their game plan for rescuing citizens and mitigating the damage. This stands out as she has recently been regarded as somewhat of a public enemy by new congresswoman Luciana Alejo, a.k.a. Barbara’s boss.

When Batgirl runs into Fox midway through the issue, I like how she wastes no time sparring. They trade some verbal jabs for a few panels, but one punch and he’s out. Sucka.

Throughout this issue, artist Carmine DiGiandomenico illustrates Batgirl’s cape to resemble a pair of wings. There’s no apparent reason for this in the text, so I assume he just grew tired of drawing a traditional cape.

There’s an interesting bit of dialogue late in the issue when Oracle states that someone “put her back together” from her state as an abandoned program. I had gotten the sense that the AI had built this new form on its own, but this indicates that someone else (my first thought is Lex Luthor) actually developed Oracle’s new form.

By the end, Batgirl has learned that Oracle knows how she thinks and can predict her every move, so her only way out is by doing something she would never do. Fun fact: this same idea was used Teenage Mutant Ninja Turtles a few years ago in a story involving Donatello and his robot gone rogue, Metalhead.

I have to say I’m kind of anxious to move on from this storyline, but maybe things will get more exciting in the next couple of issues. We’ll see next month! – Rob Veatch III

“Batfleck” Can Live On…In the Periphery