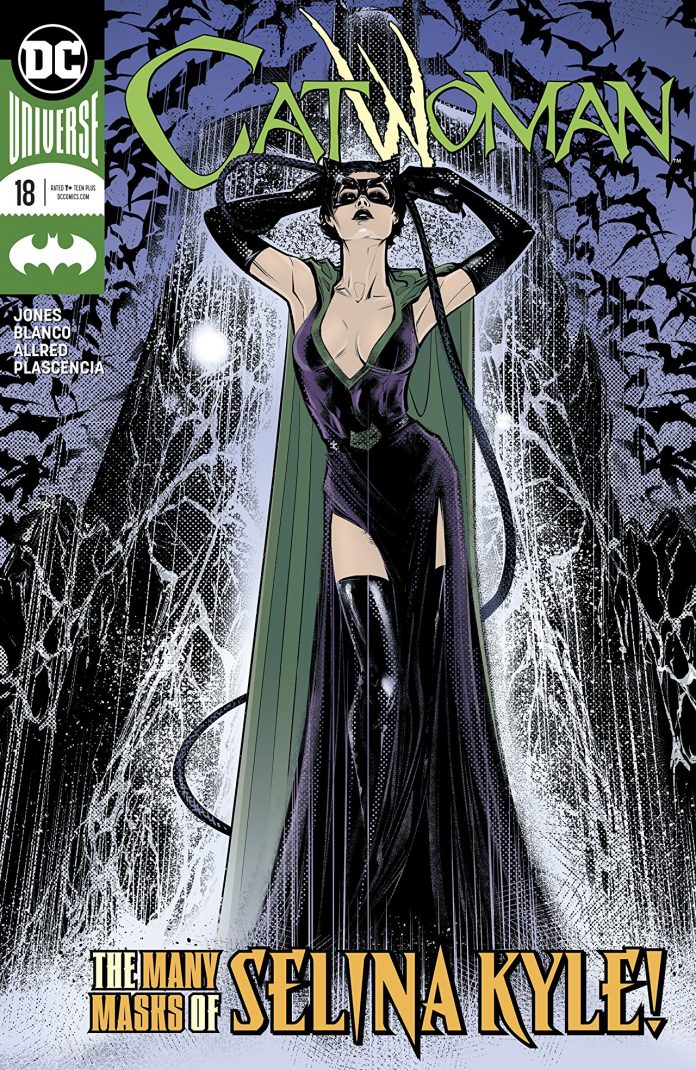 SYNOPSIS: Catwoman has made her choice: she will use the map Lex Luthor gave her to prevent Raina Creel from finding the Lazarus Pit and rebuilding herself. But has Selina fully weighed the cost? To go this route, she will effectively be taking over all crime in Villa Hermosa, a secret she will have to keep hidden from the Batman. That is, if she survives Raina’s deadly counter attack. The Creels have already been experimenting with life after death, and the assassins they send to stop  ̈ Selina will come armed with more than nine lives!

Fisticuffs at the Magic Show!

POW, KRAK, WHACK!  As Selina and Zatanna throw down with some corporate-looking thugs, Carlos watches over Selina’s sister Maggie while riots in the city outside threaten to come indoors.

…and that’s about it for Catwoman #18.  Okay, so Zatanna conjures a mystical rabbit’s foot for Selina at the end of the story, but basically… That’s.  About.  It.

So, yeah.  In summary, not a whole heck of a lot happens this month.  The action is decent, and the banter between the two heroines is humorous, but I was hoping for… just… more.  Joëlle Jones has done an excellent job over the past few months building tension and intrigue, but this issue fell a bit flat for my taste.  Sure, Selina and Zatanna get into a donnybrook with some big dudes (girl power!), but the story only moved forward by a hair’s breadth, which is typically not the case with this title.

And I know this is a problem with my expectations more than anything, but when last month’s issue ended, I thought Zatanna would be around for a few books in a row to help Selina take down Raina Creel, but it seems like the magician’s contribution to this storyline has come to a rather premature end.  Farewell, Zatanna!  We hardly knew ye!

Art duties this month are shared by Joëlle Jones and Fernando Blanco on pencils and inks and Laura Allred and FCO Plascencia on colors.  Obviously, the Jones/Allred pages shine with flawless beauty.  This team handles the more intimate character moments in the story with great finesse.  Jones’ pristine design and Allred’s immaculate color palette shine every time.

The Blanco/Plascencia team handles the action sequences, and the transition between the teams is fairly jarring.  Characters and settings aren’t as polished here.  I mean, it’s not bad, but it’s always a bummer when we have to miss out on Jones and Allred doing their thing.  But I understand why artists need to share the load on certain months.

So there you go.  Overall, Catwoman #18 isn’t a terrible book by any means – it just seems almost pointless.  But hey, it’s got a bunch of pages with Joëlle Jones art, so it has that going for it.  I can’t give this title my usual hearty recommendation, but it’s still worth a look. – John Funderburg