SYNOPSIS: This is it! The final showdown between Dr. Manhattan and Superman shakes up the DC Universe to its very core! But can even the Man of Steel walk out from the shadow of Manhattan? 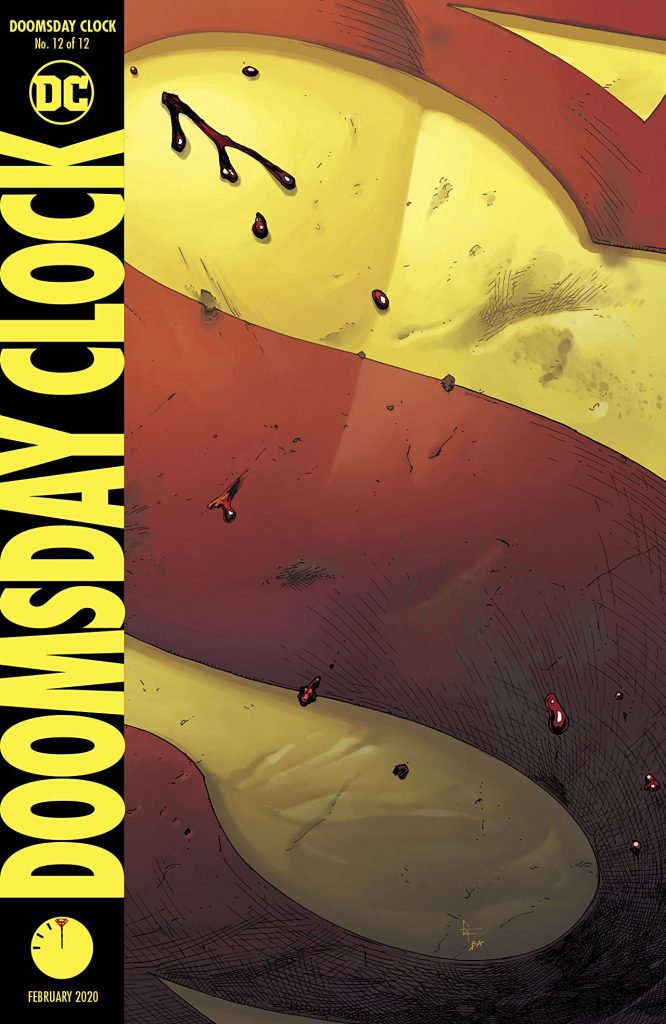 After two long years, the DOOMSDAY CLOCK has finally stopped ticking. And though we’ve waited 24 long months to see this story wrap up, we’ll be waiting years to analyze its impact on the DC Universe.

Since REBIRTH launched in 2016, we have been teased with the appearance of Dr. Manhattan. He clearly made an impact on the DC timeline, we just didn’t know how. Geoff Johns and Gary Frank promised us answers, and teased us with the matchup of the century: Man of Blue vs. Man of Steel.

That’s where issue #12 picks up. Following the violent, dramatic superhero incident in Russia, Superman was left trying to pick up the pieces, and learn how to cope with all fingers pointing at him. Then, Mr. Blue himself shows up, intrigued by this God-like figure.

Though I, and many others I assume, expected a blue-knuckled brawl, this sort of turned into a match of ideologies and understanding. Dr. Manhattan was curious about the man from Krypton, and his place in all of this. Were they both one and the same?

I loved the pacing of this issue, and the overall approach Johns took toward it. This book was never about fighting and who’s stronger, but rather about humanity and questioning one’s place in the world. The epiphany for Manhattan is the need for Superman, which also affects his own place in the universe as an empathetic being, rather than this living timeline showing where we’ve been, and where we’re going.

Story-wise, I have two minor criticisms that left me a little confused, and “let down.”

First, I can’t understand Adrian Veidt’s plan in all of this. I mean, he traced Manhattan’s energy to this other world to…do what exactly? Maybe it’ll read better in one collection, but his plan didn’t make sense to me.

Second, I thought the ending veered more “DC-like” than “WATCHMEN-like”. By that, I mean it went kind of safe. The original story ended with a gutpunch, and asked some serious questions. I didn’t get that here. Not a failure or anything, just felt a little safe.

I’ve gushed about Franks’s art for two years now, and I’m going to gush a little more. It’s simply perfect. He has moments in this issue alone that are reflective to the original series, yet you’d think he drew both. That’s not knocking original artist Dave Gibbons (who is also tremendous), but rather shows Franks’s respect for the source material. The parts that needed to look like the original, simply did. No new twist or unique, wink-wink touches….it just was. But he also has TONS of panels to shine on his own, not to mention the two-page spreads where every nerd will likely start drooling. Franks knew he needed to bring his absolute best for WATCHMEN, and he knocked it out of the park.

So where does DOOMSDAY CLOCK stand in the pantheon of DC history? I think it earned its place next to the original story. It’s a gorgeous, expansive, thought-provoking mixture of two comic book worlds that directly tie to one another. Both are a little stronger from it, but aren’t required if you didn’t enjoy.

It’ll be interesting to see if what’s alluded to at the end of this issue pays off in the future. For that, maybe the doomsday clock hasn’t stopped ticking. – Ryan Lower