SYNOPSIS: As Brainiac attacks Metropolis for Lex Luthor’s transgressions, Superman works as fast as he can to escape the bottled city of Kandor! But what it will take to get free from the shrunken Kryptonian city might be more than the Man of Steel can handle. Will he be able to leave behind the people he thought he lost and save his adoptive world, or will Superman be cataloged and preserved permanently by Brainiac? 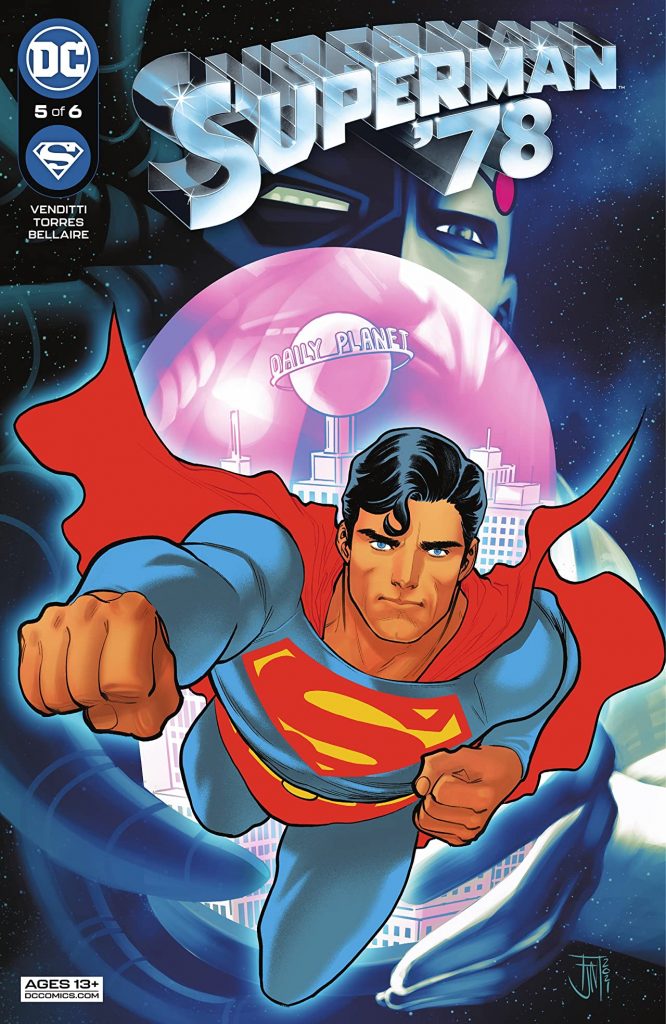 Hard to believe the penultimate issue of Superman ‘78  is upon us!

Yet here we are, and Venditti and Torres are upping the action as Superman is ready to confront Brainiac once again, but now with Earth and Kandor at stake!

Before we reach that point, Venditti shares what could be perhaps the final scene of the Els reunited. An emphasis is placed on the value of hope and how Superman inspires it, not just for Metropolis, but for his own family as well. It’s funny to have a character played by Marlon Brando state he’s never good at saying things, but Jor-El’s pain is very clear as rendered by Torres. Despite being alive all this time, Jor-El and Lara have been basically in prison. This brief time with their son has not only rekindled their imagination and optimism but been a wonderful gift, knowing that Kal has not only survived but thrived, having taken in every lesson his father imparted on the sunstone crystals that made the journey to Earth. Although the panel where Jor-El places his hand on his son’s shoulder is a small one, the act itself speaks volumes.

While the first half of the issue is spent heightening the tension and adding heart, the back half is all action! Being on Brainiac’s ship and fighting his robotic minions means the Man of Steel doesn’t have to hold back and Torres delivers on the excitement of that. Of course, it’s always a welcome sight to see Superman in his best “General, would you care to step outside?” pose and Torres nails that, along with the physicality of Reeves once again.

Venditti pulls off a fun ride, crafting an issue that manages to be epic and intimate at the same time. Seeing Superman embrace Earth as his home when confronted with being confined to his birth city speaks volumes to his acceptance of his station in life. Torres, while not a spot-on realistic likeness to the actors, carries off their essence and makes you buy into the world of the film. He even throws in a welcome cameo or two! It’s hard to believe this ride is almost over, but I am looking forward to seeing how they pull everything together, especially with Lex in the wings waiting to prove his greatness! – Javier E. Trujillo