SYNOPSIS: The final battle for Metropolis is here! Superman stands against Brainiac as he tries to save his city from being cataloged and bottled by the mechanical menace. But can Superman save his adoptive city and the bottled city of Kandor from Brainiac’s clutches, or will he be forced to make the impossible choice? 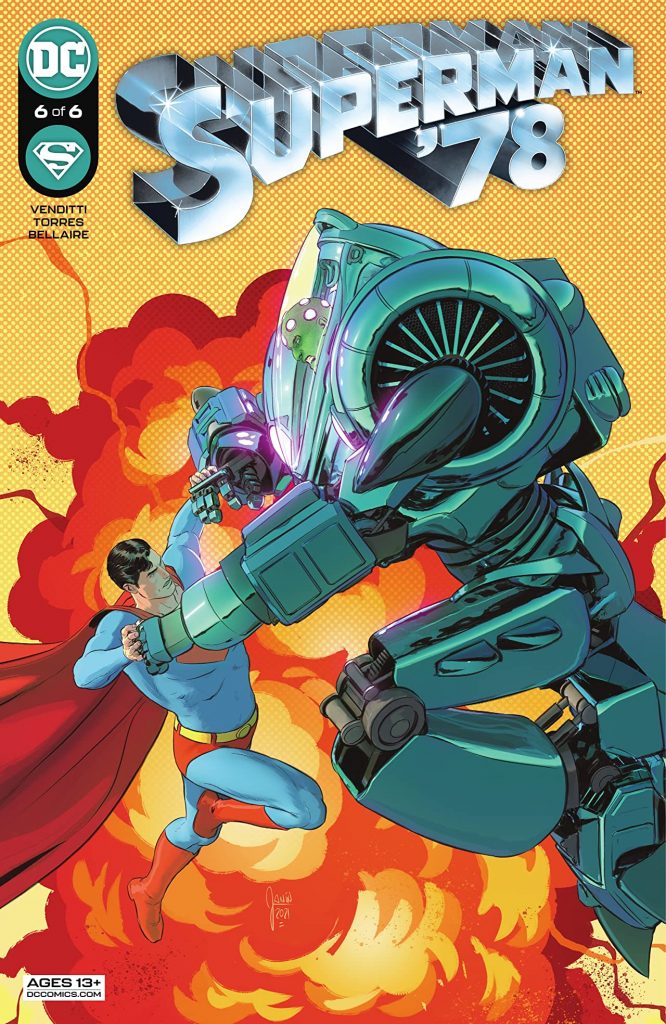 Up in the sky!

It’s the final issue of Superman ‘78!

Wasting no time, Venditti and Torres open with Superman and Brainiac locked in combat inside the villain’s skull ship. I appreciate that Superman has to struggle with Brainiac, who is encased inside of some mech suit, the design of which seems clunky. That’s a good thing, though. It reminds me of the ED-209 from Robocop, which while a decade ahead of Superman ‘78, still feels like it’s from this era. I can picture a mix of practical and visual effects bringing this to life on the Silver Screen with the appropriate verisimilitude Richard Donner was known for.

As the battle rages on, it becomes ideological as much as it is physical. I appreciate Venditti putting the focus on Superman’s optimism and outlook, highlighting the origins of his beliefs. It’s what separates him from the cold logic of the machine he is fighting and why he stands up for humanity in the way that he does. Yes, we stumble and fall, but yes, we deserve that second chance to learn and do better. It’s so in character for Reeve’s Superman that it’s not hard to hear his voice in your head as you read it!

I don’t want to get too into specifics, but the conclusion is action-packed, large in scale, and full of stakes. In fact, it reminded me of another Superman movie at times. If there was one point I felt critical of, it was Luthor’s involvement in these last two chapters. I don’t think he contributed nearly enough and was barely a footnote in this issue. I don’t believe Lex has to be in every Superman story, despite being a presence in three out of Reeve’s four films, but I was anticipating more of a face-off with Brainiac, especially given their comics history and how Lex built up his own intelligence in comparison to Brainiac’s. Turns out, it was just boasting.

Despite this, Venditti, Torres, Bellaire, and Lanphear really do make you believe that Superman lives again in these pages. The sense of fun is here, the sense of wonder and awe is here, and while the art may not be photorealistic, the essence of the actors is there.

While there is definitely a conclusion to this story, there’s also plenty of room to continue a new adventure and explore where the status quo is left at. Venditti, Torres, and Co. would be more than welcome to return as far as I’m concerned. They get the heart of Christopher Reeve’s Superman and have successfully adapted their storytelling to fit the medium of comics in the 21st century. Regardless if we do see a sequel series, this one ended on a pitch-perfect note that will make fans of the 1978 film very happy! – Javier E. Trujillo